I know somebody is going to ask "What is a kennel garden?"

I've told the story of the kennel garden before, but for those who may not have heard about it, here I go once more. Annie and Otto are our two dachshunds. We bought them as ten week old puppies on April 5, 2008, and proceeded from there to make a puppy safe area in our back yard.

Our neighbor's fence, hidden from view by a row of tall arborvitae and our garden shed, was falling down. There were too many open spots where curious little pups could escape and be in danger. We felt the best solution was to enclose half our patio with wire fencing to make a play area, and buy a very large chain link kennel that would sit on the lawn next to the patio. We attached the two structures so the pups could easily go from patio to kennel. To make a long story short, those pups would not go in that kennel. It was as though unseen monsters lurked in that structure, and just the thought of going in there sent them into shivering fits. So I donned a long sleeved jacket, with jeans tucked into the tops of socks, and put a shower cap on my head. Armed with the staple gun and a roll of poultry wire, I crawled into that narrow, dirty area between fence and arborvitae, and stapled the chicken wire to the neighbor's rickety fence. It was a nasty job, but somebody had to do it.
With the fence puppy-proofed, the "kids" had free reign of the back yard, but the kennel was a pain in the backside to mow in and around, as well as being a useless structure, so I decided to move it to the back corner of the yard and incorporate it into the vegetable garden. I removed one side of the chain link to open it to the east garden, and part of another side to open it to the north garden, leaving the rest to use as trellising for climbing plants. The gate can be closed to keep the pups out of the gardens (the north and east gardens are fenced), but to allow me easy access. 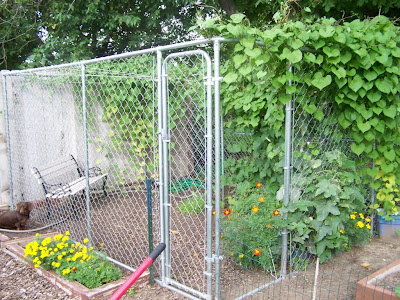 The kennel garden 2010, waiting for the morning glories to bloom.

Fast forward to today: I haven't been showing you what a mess the garden was when we returned from Arizona last month. When we left, the morning glories were either still blooming or just ready to bloom, so I left them. You can imagine what a tangled dead mess we had! The neighbor's trees don't drop their leaves until after we leave in the fall, so there's that mess, as well as a few branches from their walnut tree, to clean up. Last week I pulled down most of the dead vines, and today I finished it off and cleaned up all the mess. 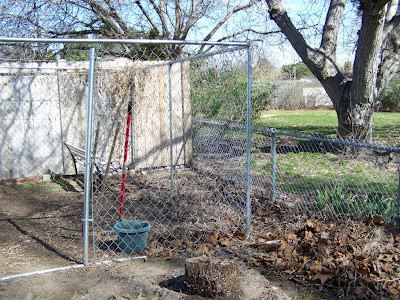 It's actually not looking as bad in this photo. I'd already been pulling down vines and raking up debris by the time I thought to go for the camera. Notice the post that is loose and leaning. Evidently the wind and the weight of the morning glory vines were too much for the bracket, and it popped it right off. 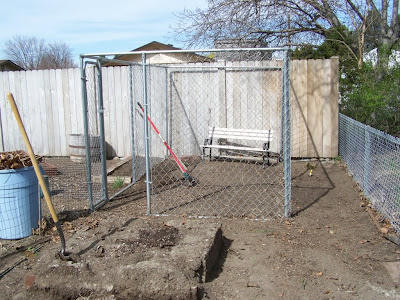 Here it is, all cleaned up, and the post repaired. 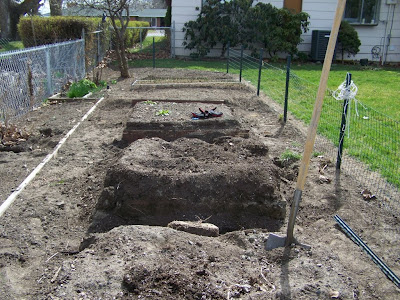 Next job will be to tackle the east garden, where I tore out the raised beds. All of those mounds of soil have to be flattened out and formed into probably four or five new beds, like the three way back at the other end. These beds will all be 8' long and range from 2' to 4' wide. My pathway will be on the left, bordered by the remaining boards and the neighbor's chain link fence. I sure wish I could find someone to fire up the old rototiller.