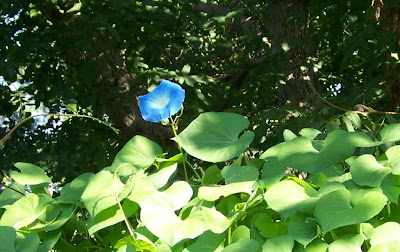 Better late than never! I thought we'd be leaving for Arizona before the Heavenly Blue morning glories blossomed this year. I doubt we'll get to view the vines in their full glory, but at least we are getting a few blooms to admire each day. Next year I'll try to plant an earlier variety, like Grandpa Ott. 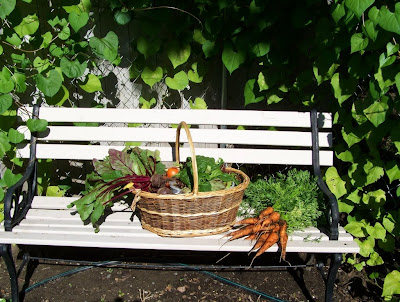 Baskets of produce are still being picked. Even though the quantity is less, the quality is good. 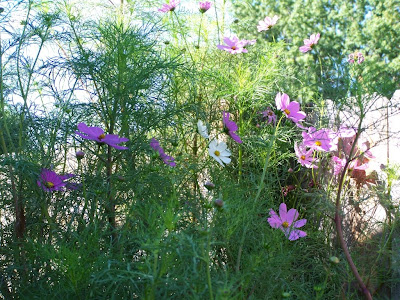 As much as I love cosmos, I really need to plant a shorter variety in the future. Many of these were over 8' high. 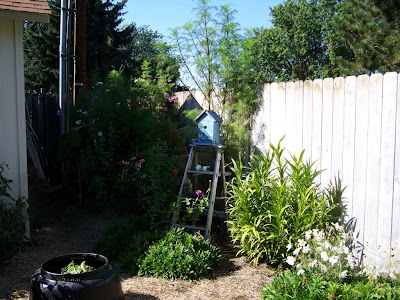 The cosmos and sunflowers were tied up against the fence, but they got so tall they still toppled over. Only the toppled cosmos blossomed though, the upright plants have yet to show any color. 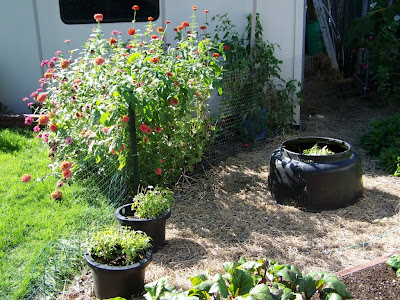 The squash patch has been cleaned out, and I moved the top of the compost barrel there. I'm filling it with vegetation and kitchen scraps, layered with dry hay and composted cow manure. I'm going to plant my Waltham Butternut squash on top of it next spring. Two pots of basil, cinnamon and lemon, were moved from behind the zinnias, given a trim, and set out where they can get some sun. 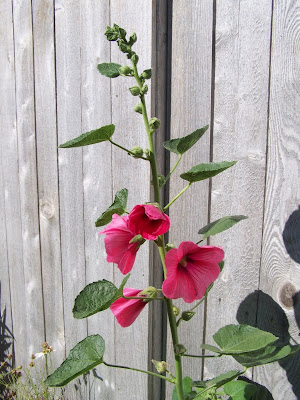 Hollyhocks were cut back to the ground when powdery mildew and rust took a toll on them. This little beauty popped back up and is giving me some pretty blossoms on a healthy looking plant. 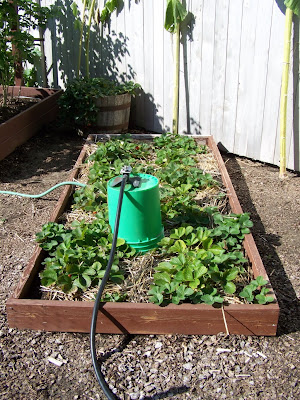 The strawberries didn't send out as many runners this year as usual, which was a good thing. I got over 22 pounds of berries from this little area, and I'm still picking them a couple of days a week. 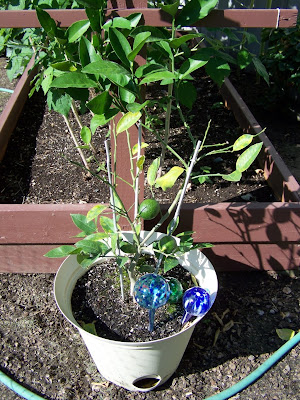 Poor Leona the Meyer Lemon. Last spring I put her over by the shed, where she would be protected from strong winds and harsh sun. She was happy there....until the zinnias took over and tried to smother her. By the time I discovered what was happening, her bottom leaves were all mottled with bright yellow spots. When I Googled for the problem, I though she was diseased and doomed to die. However, after I moved her out to the sunshine, she grew some healthy new leaves on top. That makes me think she had a fungal disease from lack of air circulation. The sickly leaves are falling off, but her two full sized lemons are hanging on. I hope I can nurse her along until we at least get our first lemon harvest from her. 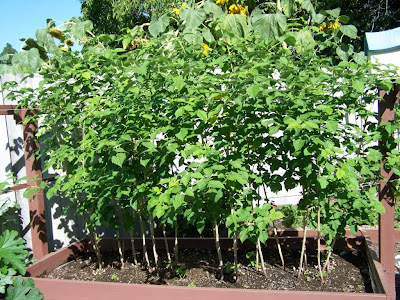 Maybe I pruned my summer bearing raspberries a bit too soon, as they're growing out of bounds already. I may have to crop them back again before we leave. 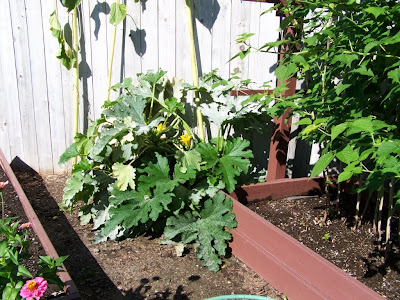 Powdery mildew is spreading fast on the zucchini. The summer squash and cucumbers were a total bust this year, and the yields were pitiful! 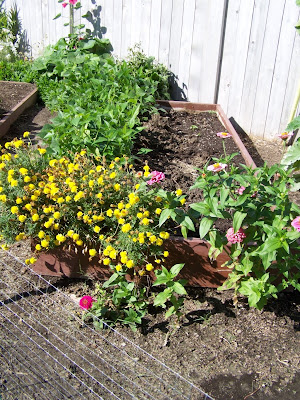 Do you remember the tomato fortress? It's all gone now. I lost all my Brandywines to diseases this year, so this spot won't be used for growing tomatoes again. These bush beans are still giving us enough to eat and some to freeze, but about one more meal of them and I'll be ripping them all out and cleaning up the bed. 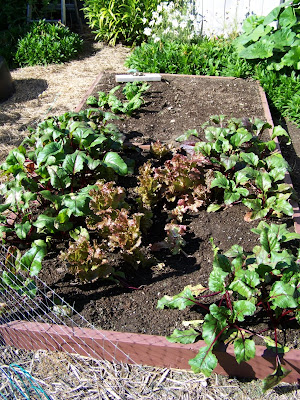 This bed is actually more productive than it appears in the photo. The baby beets are now being harvested, and the lettuce has been feeding us and the rabbit for probably a month or more. The tiny patch of spinach in the back was all that germinated after sowing the entire bed. The beets were covered with netting, and didn't suffer much leaf miner damage, but the spinach was left uncovered and is mostly unusable. I did pick a few leaves this week, but not enough for a meal. I'll probably just toss them in with a salad or some scrambled eggs. 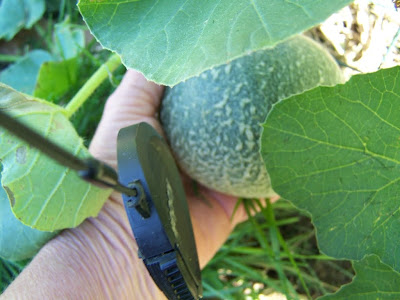 Awww, my two baby melons are developing their netting but won't have time to ripen before frost. The seeds were planted on a whim in late summer, from a store bought melon. I knew they wouldn't have enough time. I was surprised at the number of blossoms that developed on it. I cut the vines way back so it could put its energy into ripening the fruit, but it was too little too late. 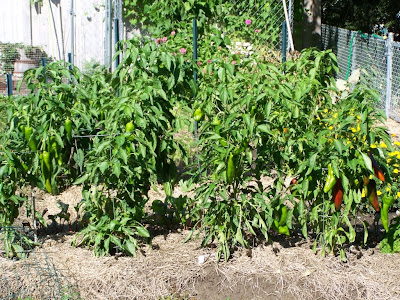 Peppers, peppers and more peppers. At least I'm getting some red ones, and they are as sweet as sugar. I'm watching the weather reports, as I will soon have to harvest all that are left before they freeze. 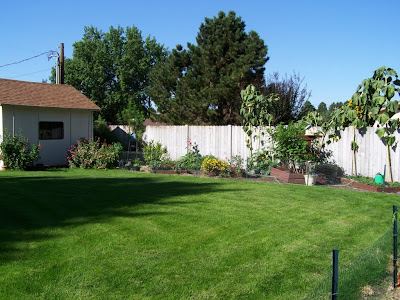 The north garden is beginning to look a bit emptier. I only have two weeks left to get it all harvested and cleaned up. 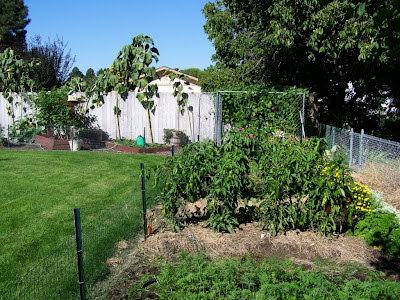 The east garden still has a lot of carrots and peppers. Absolutely tons of parsley is still growing here, I just do not need another sprig of it!

I hope the new pickup is large enough to carry all the butternut squash, all the carrots that remain to be pulled, Leona the lemon tree and three or four coolers full of frozen produce to Arizona. We'll be leaving early in the morning of October 15th, and that's not very far off. Granny has a LOT of garden cleanup to do in the next two weeks, not to mention packing for a 5-month trip away from home.