We had a rain storm yesterday! We don't get much rain where I live, so it's very much welcomed when we do. But it was quite cool and windy today, after having temperatures in the mid to high 80s all week. I did get out in the garden for a bit, as the green beans hadn't been picked since Wednesday. After picking about four pounds from that 4x2-1/2 foot patch of bush beans, I decided there just wasn't much reason to leave the plants in any longer, so out they came. There are little beans forming on the ski pole beans now, so if it doesn't freeze soon, we'll still have fresh beans. Cookie (my house rabbit) was out of mesclun and red leaf lettuce, so I cut a full pound of that. He loves the stuff, and it's still really growing well in the cut-and-come-again garden. I pulled one of the last two green onions for our dinner. If you haven't read my blog entry about planting your store-bought green onions, run don't walk to August 22, 2008: I Heart Frugal Girl! I included a yardstick in the photo I took of my veggies today, so you can see the onion has grown to 21" long PLUS 4" of roots! 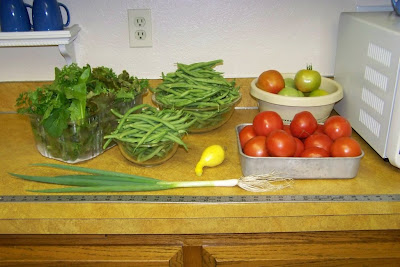 The red tomatoes were picked semi-green earlier this week, the green ones were removed from the plants I pulled Tuesday. That's the second little crookneck I've picked from the one remaining plant, with several more struggling to make it before it gets too cold.

I'm trying to get some mesclun seeds started for a possible bunny greens garden when we get to Arizona. I used toilet paper rolls and homemade newspaper pots, with packaged seed starter mix. So far so good. I think the lid will have to be removed tomorrow, as the little plants are nearly touching it. 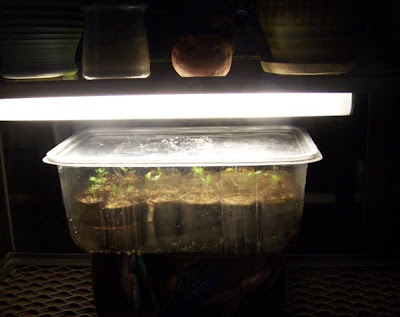 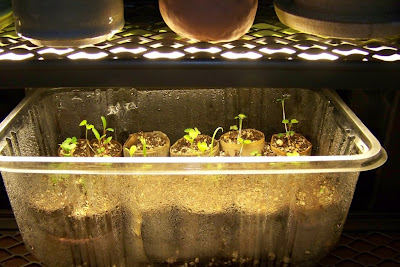 Thursday I made another batch of Hot Pepper Jelly from some beautiful red bell peppers I found at Winco for less than 50-cents each. I increased the amount of jalapenos to a full cup, since the original recipe was way too mild, and I also added some dried red pepper flakes. I really packed the chopped peppers tightly into the measuring cup. Too tightly, I guess, as I ended up with two whole cups more jelly than I was supposed to have....and it didn't set. So yesterday I opened up all 8 half-pint jars and poured them into the old Dutch oven and boiled it down a bit, then processed it again. I think I boiled it a bit too much, as it went from 8 half-pints down to 5 (it should have made 6). It's a bit stiff now, but I didn't have to get out the electric knife to slice it, so it's OK. It tastes delicious, and it looks very pretty. I just hope it doesn't get any firmer! 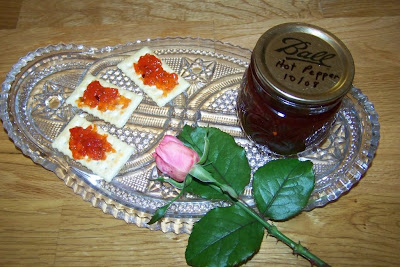