I must say, Di over at Voice in the Garden , knows how to lift the old blahs from my shoulders! Last Sunday she offered the gift of a print of one of her lovely paintings to a lucky reader, and I got lucky!

My step-father was a railroad man. I hesitate to call him "stepfather", as he was my "Dad" from the time he married my mother, when I was six years old (my birth father is still living and will celebrate his 92nd birthday this month). Dad and both of his brothers followed their father as second generation railroaders, and a couple of my cousins have made it three generations.

Dad worked for years for Camas Prairie Railroad, which was a short line railroad in northern Idaho jointly owned and operated by Northern Pacific Railway and Union Pacific Railroad. The Camas Prairie Railroad was known as the "railroad on stilts" due to the many wooden trestles. In one five mile stretch, there were more than a dozen trestles. For many years, Dad was a bridge foreman in charge of keeping those trestles in good repair. 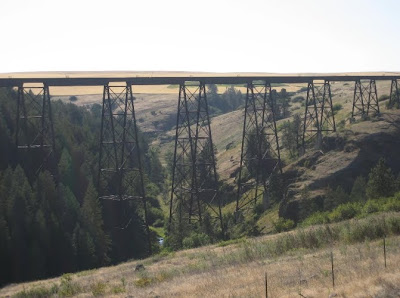 Lawyer's Canyon Bridge (above photo *note, this is not Di's painting! Use above link to view the prize) was one such structure on which Dad worked. At the time, it was said to be the second highest railroad bridge in the US at 296 feet high and 1,500 feet long. I actually watched my Dad walk out on a plank that was wedged somehow under the rails near the center of this bridge and jump up and down, just like one would jump on a diving board. This was the same man who fell off the roof of his house while replacing a shingle! His dog, who was raised on the railroad and spent his days by Dad's side as he worked, would not cross a trestle. Instead, he would go down into the canyon and swim the river, then up the other side to cross. My dog, however, would happily trot across the bridge without a second thought, even though he wasn't a "railroad dog". Evidently the height was less formidable to him than the prospect of getting wet.

Dad went on to become a supervisor, and eventually retired from Camas Prairie Railroad.

Thank you, Di, for picking me to receive this lovely print. Your gift will become our family's treasure.