The Kennel Garden
I've told the story of the kennel garden before, but for those who may not have heard about it, here I go once more. Annie and Otto are our two dachshunds. We bought them as ten week old puppies on April 5, 2008, and proceeded from there to make a puppy safe area in our back yard. Our neighbor's fence, hidden from view by a row of tall arborvitae and our garden shed, was falling down. There were too many open spots where curious little pups could escape and be in danger. We felt the best solution was to enclose half our patio with wire fencing to make a play area, and buy a very large chain link kennel that would sit on the lawn next to the patio. We attached the two structures so the pups could easily go from patio to kennel. To make a long story short, those pups would not go in that kennel. It was as though unseen monsters lurked in that structure, and just the thought of going in there sent them into shivering fits. So I donned a long sleeved jacket, with jeans tucked into the tops of socks, and put a shower cap on my head. Armed with the staple gun and a roll of poultry wire, I crawled into that narrow, dirty area between fence and arborvitae, and stapled the chicken wire to the neighbor's rickety fence. It was a nasty job, but somebody had to do it. *grin*

With the fence puppy-proofed, the "kids" had free reign of the back yard, but the kennel was a pain in the backside to mow in and around, as well as being a useless structure, so I decided to move it to the back corner of the yard and incorporate it into the vegetable garden. I removed one side of the chain link to open it to the east garden, and part of another side to open it to the north garden, leaving the rest to use as trellising for climbing plants. The gate can be closed to keep the pups out of the gardens (the north and east gardens are fenced), but to allow me easy access. 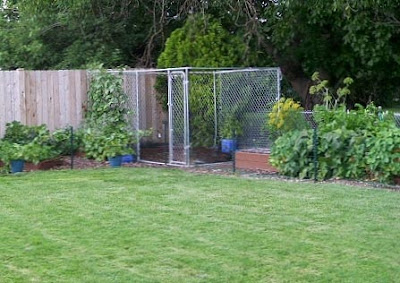 I must admit, the 2009 kennel garden was less than successful. I planted tall peas against the chain link on the east side and pole beans along the west side. I was hoping the beans would provide a bit of shade to keep the peas cool enough to crop for a longer period, but birds decapitated the pea vines and I didn't get more than a handful or two of peas from them. Neither the peas nor the beans wanted to attach themselves to the chain link, so it was a constant battle to keep them climbing up rather than sprawling. I put a bucket, with a determinate tomato, inside the kennel, but it was too cool and shady, I never got a single ripe tomato from it (thank heavens, I had too many tomatoes as it was!).

So what am I going to do differently this year? Well, I'm still planting the pole beans on the west side, but I'll attach some heavy garden twine to the structure to give the vines something to climb. And I'll plant the peas on the east side again, but use a short, bushy variety and protect that area with bird netting. The area between the kennel and the neighboring fence is pretty much unusable, and contains a large arborvitae and an old yellow rose bush, so I think I'll move the old composter back there, where it's handy to the garden. That frees up another planting area where it now sits, behind the garden shed. A cherry tomato will be planted next to a corner post. It's a nice, sunny spot and the tomato can be tied up to the post. 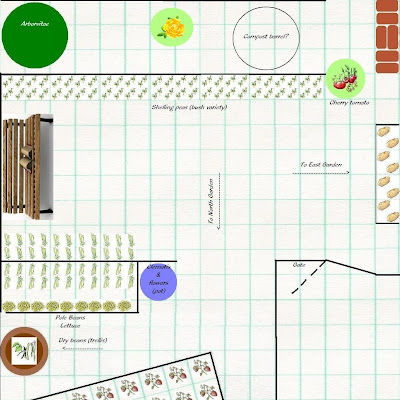