Yes, it must be March. Our weather tells me so. I cannot remember May ever being as cold as it has been this year. By this date in May we usually have days in the 80s or higher, and nights in the high fifties. This year we can't seem to get out of the low 40s/60s. Once in a while the sun blesses us by appearing from behind a cloud, and we get a fleeting glimpse of what spring should be like.

A "block" each of Dragon Tongue beans (11) from Dan and Royal Burgundy beans (12) from saved seed. A "block" is a bit larger than a square.

********
It's Harvest Monday!
Join in the fun at Daphne's Dandelions. Brag about your harvest, whether it be large or small, and see what others have harvested this past week. 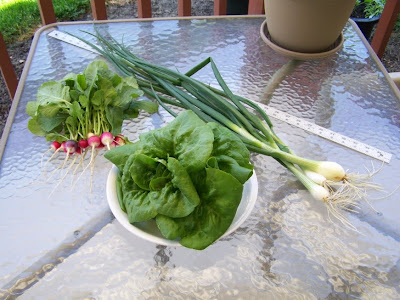 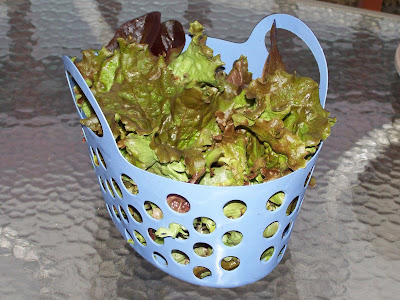 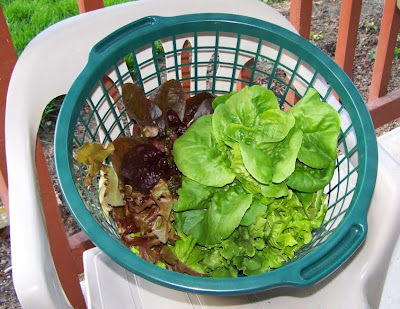 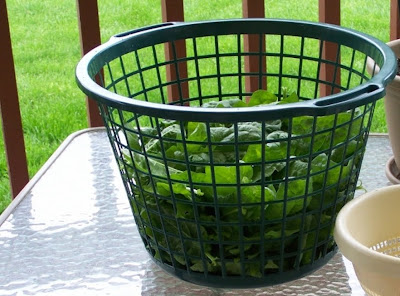 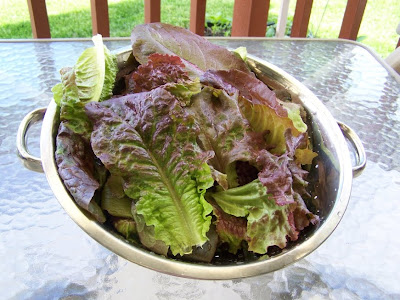 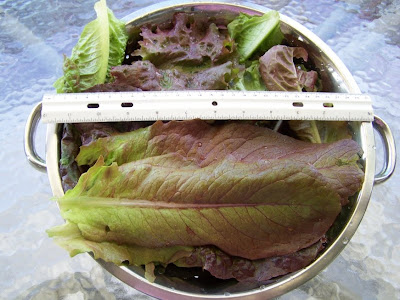 11 oz. red lettuces, some leaves were a foot long 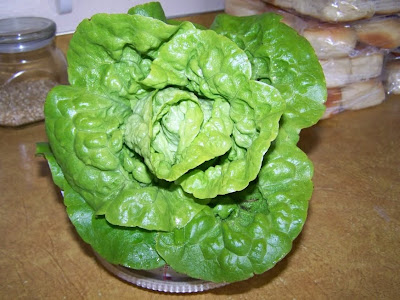 10 oz. (1 head Buttercrunch) that hides the dinner plate it sits on 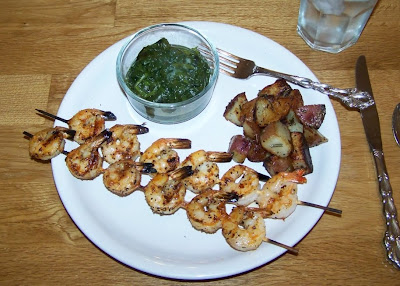 Rosemary in the roasted potatoes, cooked spinach. The meal doesn't look very pretty, it needs a bit more color (fresh tomatoes, anyone?) but it was delicious! I cooked the shrimp on the barbecue, and they were well seasoned with pepper and garlic and basted with butter.

Onions in hash and on burgers.

Sweet & dill relishes, ketchup and 2 pints of salsa from last year's garden at family barbecue, along with fresh lettuce for the hamburgers.

Observations:
It must be the coldest, windiest May ever.

Sparkler radishes were smaller, but didn't have the wire worm damage that Champion and Cherry Belle had. 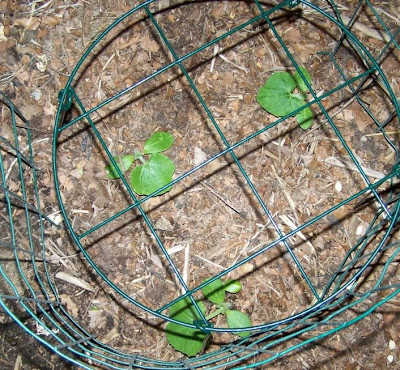 Yellow crookneck squash (I think) are volunteering behind the shed, where the old compost pile was situated last year. I picked out three to grow, and will keep the rest pulled. I'm just about positive these are the crooknecks, as I tossed some really big ones last year.

Buttercrunch lettuce heads put on 4 ounces from the beginning of the week to the end of the week, and started forming a tight inner head.

General Gardening:
Bought two new sprinklers, the kind that can be run several in a line, and set them up to cover the north garden. I had three sprinklers on the system, but there wasn't enough pressure for the third one, so I had to crawl behind the dog kennel, move the compost barrel and go on hands and knees under the arborvitae to connect the hose for sprinkler #3 to a different outlet. Then I had to hook up the hose for sprinkler #4 to the other outlet on the same Y fitting as #3 and run that hose down the fence line so it would also water my neighbor's little strip garden as well as my east garden. Now everything gets watered with automatic timers, and Mr. Granny won't have to move hoses to mow the back yard. Only the buckets and containers have to be watered by hand, which takes about ten minutes.

Dug compost into west garden, stapled strips of wire fencing to the cedar fence for the Ottawa Cranberry pole beans to climb, then fenced off the south side of it to keep the dogs out, Trying to decide what kind of flowers I want there.

Made plant labels for all the tomatoes and the peppers that are in pots. I ended up with an extra label, so I've misplaced a tomato or counted wrong. The one untagged tomato is one of the last ones I potted up, and I didn't write down what it was...it's either a Husky Red Cherry or a Dwarf Champion (the two leftover labels). I'll have to compare it to those plants once it bears fruit. 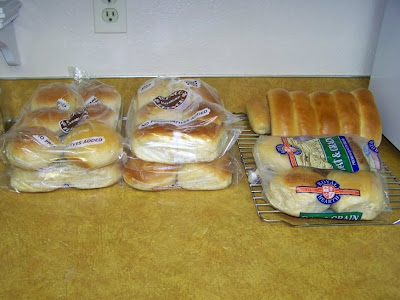 Saturday I baked 30 big hamburger buns and 10 hot dog buns for Sunday's family barbecue.
On Sunday, the entire family (17 of us over the age of 12, four babies and three dogs) came for hamburgers, hot dogs and brats cooked on our new barbecue. 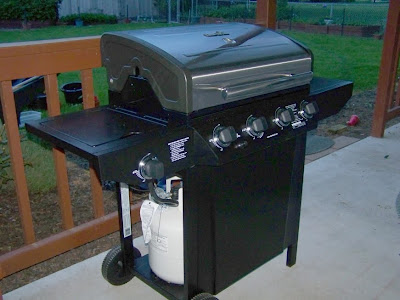 We bought it last week, and it only took us three days to put together. Who knew a barbecue could have so many parts! It was a nice replacement for our old one, which really served us well for 20 years. 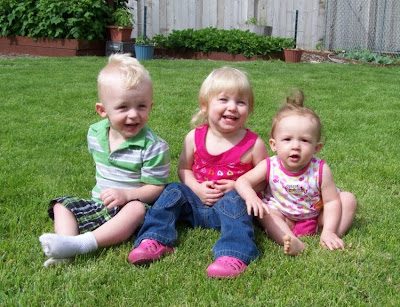