I'd like to thank Gloria, from the lovely Dakota Garden, for sending me The Stylish Blogger Award. Since I have already partaken, I'll just direct you to that recent post right here!

Tuesday I finally got my pepper seeds planted and in the propagator. I'm not going to grow as many this year as in the past, as I still have a lot of them in the freezer. I only planted four each of Quadrato Rosso D'Asti, Red Marconi and Early Jalapeno. Tonight I planted a few containers of tomatoes, although I hadn't planned on starting them until the 15th. I decided to just put one seed per container, so if I don't have 100% germination, there will still be time to try again. So far I've planted three Sungold, four Cherokee Purple, two Matt's Wild Cherry and two Yellow Brandywine. 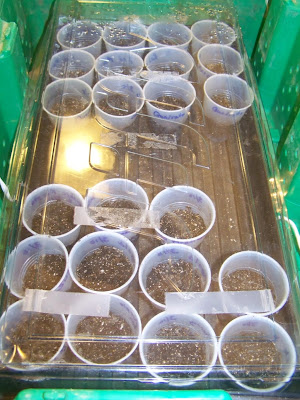 There's still room for nine more cups in the flat.
I still had a few more tomatoes to plant, when my son John showed up to install my new cooktop, so I'll have to finish tomorrow. It looks awfully big. And black. And flat.

I was in dire need of a new one, though. The old one had two burners that had quit working, so it was a bit difficult fixing a large dinner. A couple of years ago, John replaced the thingies that the burners plugged in to, but the clips just wouldn't hold them in place, so they wouldn't keep an electrical contact. Even though it still looked fine, I decided not to put any more money into repairing it. I hope I won't regret getting a ceramic cooktop. At least it has a large double burner that will hold a canner, and there are no overhead cupboards from which to drop things onto it. But, oh my, I'll probably have to learn to cook all over again!

I haven't been outside doing any garden preparation. It's been raining the past two days, and my cold has turned into a sinus infection. I'm feeling pretty lousy, so I'm not going to push it. Let's hope the antibiotics and the sinus rinses get me well soon, 'cause I've got lots of work to catch up on!