My daughter came by just as I was heading out to buy some paint for the garden boxes. I had several paint samples in hand, the rustic brown that was their original color, and some lighter beige colors that I thought might be a better choice. The boxes retaining so much heat has been one of my problems with them, and the dark color doesn't help. A lighter color would reflect heat, rather than absorb it. We finally picked a color that was one of several in the brick on the front of our house, thinking I might just change our trim from that dark rust-brown in the near future. Amy picked the one she felt went best with the almond colored house siding.

We went to Wal-Mart for the paint, and had to hunt someone to mix it up. I told the man I wanted Glidden Exterior Satin, gave him the color card, then did the rest of my shopping while waiting for the paint. When I went to pay for it, it rang up at $29.99! I just about keeled over....thirty bucks plus tax to paint garden boxes? I questioned the amount, and the checker noticed I had paint with PRIMER! I hadn't asked for the dual purpose paint, the boxes are already painted, so they only need primer in a few places where they've weathered badly. I have a whole gallon of primer in the garage, I don't need more! It turns out that ALL of the exterior paint in this store has the primer in it! I went to the service counter, and returned it, although I told the girl I'd take it if she discounted it. After all, they will eventually have to discount it anyway. Well, she wouldn't even listen, just gave me back the purchase price.

Soooo...off we we went, across the street, to Lowes. They had Valspar exterior satin for $19.99. I wandered over to the garden department and parted with $21.11 for a big bag of vermiculite, then went back for the paint. Instead of the one I had told him I wanted (15-year warranty), he had mixed up a more expensive (lifetime warranty) version of the same brand. I had just returned a $30 can with primer, now I had a $30 can with no primer! I said, no way. I had the print out of the variety I wanted right there on the counter, and that was the one I had shown him. They ended up selling it to me for the $19.99 price, so I took it. 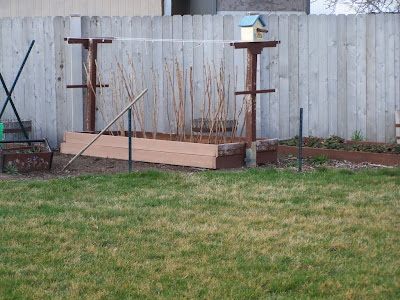 I don't like it at all. I'll use it to paint the walls in my shed or something. It looks kind of pink, or flesh colored. It just looks yucky. Tomorrow I'll go back and buy a can of that old rusty-brown.