Soon it will be tomato planting time. It's hard to imagine, since our nights are still freezing and we're lucky if our daytime temperatures hit 60F. It's been such a cold spring, with temperatures running 10-15 degrees below normal. Here in our section of Eastern Washington we should be getting temperatures in the 40s at night and the 70s in the daytime. It's not happening!

Most years I can get by planting my tomatoes during the last week of April, with some protection against unexpected freezes. This year I'm hoping to get them planted around the second week of May, but just in case the weather man and Mother Nature decide to finally bring on the warm, I'm getting everything ready for the biggest event of my gardening season.....tomato planting time!

As you know, I've already prepped the "tomato fortress". That's where the Brandywines will be planted, as they grow so huge. I can't be that aggressive with large structures elswhere in the yard and garden, as there isn't space for them, but I do have to make sure I have a really sturdy support for the heavy plants. I would really like to have some CRW cages (that's concrete reinforcement wire), but being the weak old woman that I am, I'd probably keel over if I ever tried to build them. Nah, that wouldn't happen, but I really do not have the strength in my hands that it takes to cut that heavy wire and form the cages. Instead, I must rely on the biggest (and cheapest) cone shaped cages I can find. Two years ago I got some really heavy duty ones from Wal-Mart for under $3 each. I wish I had bought about fifty of them! But I didn't, and when I purchased more of the same size last year, they weren't nearly as heavy duty. The wire was thinner than what was used the previous year, and some of the welds have already broken.

But I digress. On to tomato planting preparation.

Yesterday I looked over the west garden. Yes, I have an east garden, north garden, west garden, shed garden and patio garden. That's what happens in small yards like mine, you garden wherever you can find a spot. It keeps me running in circles to tend them all! Anyway, I decided the west garden could hold four tomato plants this year. As usual, the bottomless buckets will be used here, so I can take advantage of the surrounding soil for planting other things. I had already put the new rhubarb in this bed, and it probably won't achieve enough growth this year to need more space than I've allowed, so four Cherokee Purple tomato plants will be its companions. As usual, before setting the buckets, I amended the soil with a couple of inches of composted cow (not steer) manure. The buckets were set and the supports were installed. The stakes were screwed into the neighbor's fence (I didn't ask him, but I have to look at that ugly thing, so the least he can do is allow me to use it as a tomato stake anchor).

I moved on to the patio garden, and set two buckets on the east side, installed 8' long stakes, and screwed them into the patio eaves. The cherry tomatoes will go here, and I'll just try to keep them tied to the stakes rather than double decker two cages.

I then filled all the buckets with a mixture of half top soil and half compost, both of which I had to buy as I'm completely out now. I pulverized the last of my saved egg shells in the food processor with a few aspirin tablets, a handful of old calcium tablets, a cup of corn meal and two cups of alfalfa pellets, and divided among the six buckets (two others by the patio). Now, with the tomato fortress, I have prepped 9 buckets for planting. One more bucket will be set at the west corner of the patio today, and I'm contemplating a third one for the east side of the patio. That spot is a bit iffy, as the nearby dryer vent might provide too much heat. I'll have to think about it.

If I use that third bucket on the east side, that brings the total to 11 places for the tomato plants. Today, if it doesn't rain on me, I'll prep the remaining planting spots, which will all be in-ground rather than in-bucket. I think I can crowd five plants into the east garden, and two plants next to the shed, for a total of 18 plants. That's five more than I had originally planned for this year, but didn't you all know I'd never make do with only 13 tomato plants? I have 20 plants growing, and I'm going to (gasp) buy (gasp) one from the nursery. All but one of the dozen Sungold seeds I planted failed to germinate, and that one is less than an inch tall, compared to most of the others that are 8-12" high. I haven't much hope for the wee thing. When I bought the rhubarb plant, I checked to see if they had Sungold. They didn't, but they had Sun Sugar, which is similar. I'm going back for one.

Speaking of the nursery, which is less than a mile from here, I might be buying all of my tomato plants in the future. Not only do they have lovely specimens, and a huge selection of heirlooms, they are priced at $1.49 a four pack. I don't think I can grow them from seed for that price, considering the cost of the planting medium, the electricity to keep them warm and under lights, and the personal time spent on them.

But, back to what got accomplished yesterday. After I got all those tomato buckets prepped and secured, I moved two pots into the west garden and filled them with California Poppies and blue lobelia. Then I moved eight strawberry plants from next to the patio, and planted them for a ground cover. Lastly, since that west fence has a dog on the other side that Otto just absolutely hates, I constructed a short fence to keep him out of the bed. When Otto met up with the little fence, he actually sat there and cried! He has now been banned from nearly every garden area in the back yard. 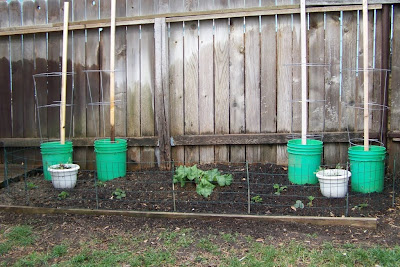 The west garden doesn't look like much yet. I'm thinking I'll move those white pots and add some taller flowers to help hide the ugly buckets. I'm also thinking I need to unscrew the stakes from the fence and add a second cage to each bucket, because the Cherokee purples got so tall they blew over last year and broke where they flopped over the edge of the cage.