The weather has been unseasonably cold, and it seems much of the garden is about two weeks behind its normal growth. Even the lilacs are just beginning to bloom, two weeks later than normal. An article in this morning's paper had the farmers lamenting the fact that they should be getting some crops to market, but they are at least two weeks away. That is, if there is even a crop. It seems an early killing frost last November, along with this cold spring, have taken a toll on many of the crops. There will be no cherries this year and an apple crop is "iffy". One farmer stated that his sugar snap peas should be knee high by now, but they are just barely breaking through the soil. My own garden reflects many of the same problems, yet some crops are actually ahead of previous years.

The Garden at the End of April 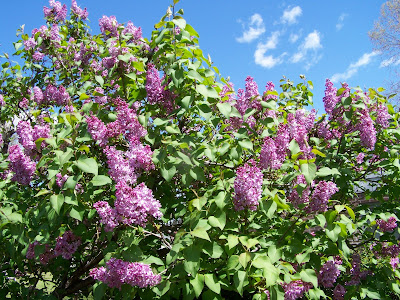 I brought in my first bouquet of lilacs last night. 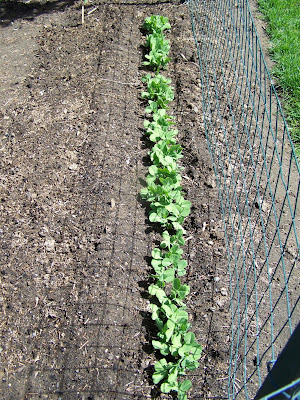 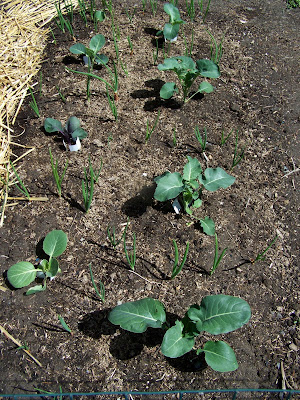 Cabbages, broccoli and yellow onions. This is the later planting of brassicas. 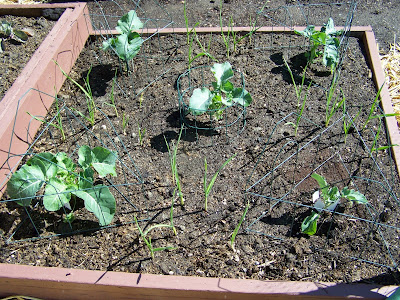 The first planting of broccoli, with spring planted garlic. All of the broccoli and cabbage plants are way ahead in growth from previous years. 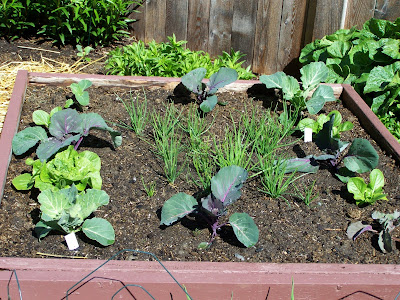 Spring planted shallots, lettuce and more cabbages. I don't know why I planted so many cabbages! I have no room for potatoes this year, I should have used the other cabbage/broccoli/onion bed. 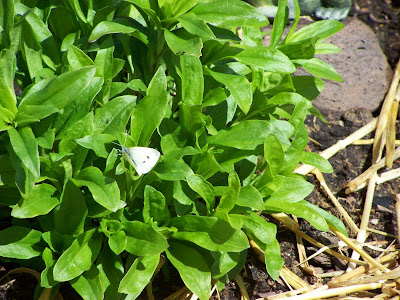 Uh-oh, a cabbage moth appears to be enjoying the Sweet Williams. 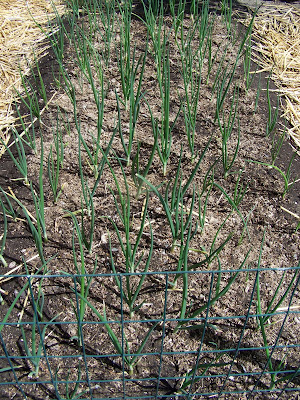 The Walla Walla sweet onions aren't as large as last year's, but they started off smaller and less robust than the ones I bought in 2010. 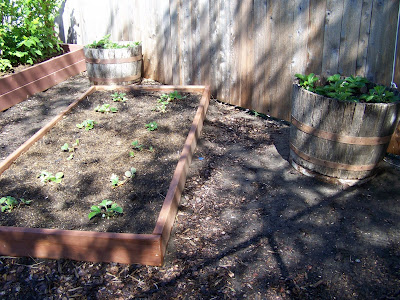 Even though I separated and then replanted this bed of strawberries, it's nowhere near as mature as in previous years. 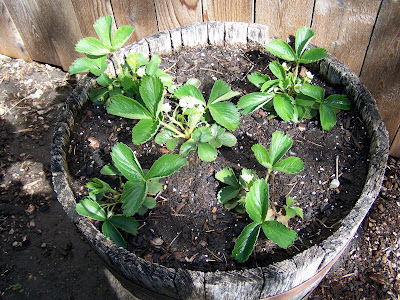 The strawberries in the two whiskey barrels are faring much better than those in the bed. 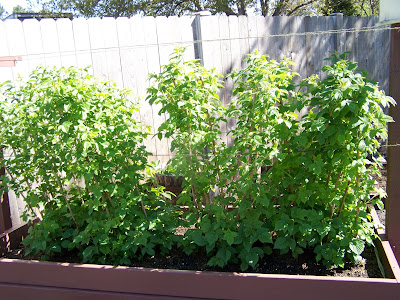 Last year the raspberries were in full bloom by mid-April. This year the tiny buds are just now beginning to form. 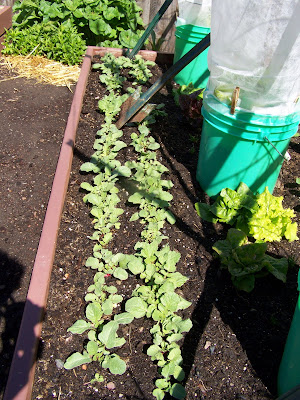 The first planted radishes are probably about a week from first harvest. The second planting was consumed by the quail. I set out two tomato plants in this garden the other day, and protected them with row cover. I have follow up plants if these don't do well. I think the weather should be nice enough to plant all of the tomatoes next week, but I'll probably wait until after the 10th. of May to set out the peppers. 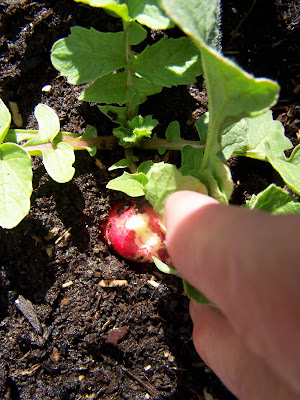 If there are any radishes left after the ants get through with them. I've never had ants eat radishes before, but teeny-tiny black ones are just swarming over them this year. I can't find an ant hill, Mr. Granny thinks they must be in the wood. 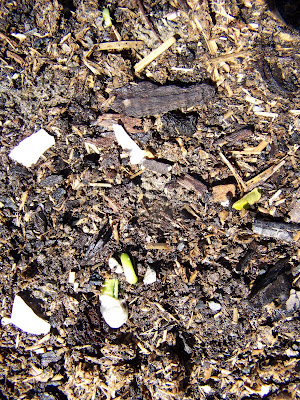 Look closely. You might have to click the picture to make it larger. The first planting of bush beans has just broken the surface today! Again, these are quite a few days behind last year's. 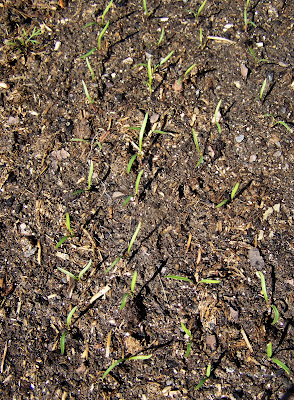 My-oh-my. I planted carrot seed mats in a 1'x7' plot, and I think germination is close to 100%. I can see a few places where it looks as though our resident robin has done a bit of seed shuffle while pulling out worms, and I'll have to do a bit of thinning, as I put these seeds only 1" apart. Cookie will love the baby carrots as they develop, though. 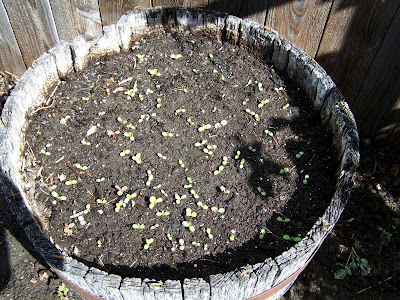 I combined a bunch of old lettuce seeds in a shaker, and sprinkled them over the surface in this whiskey barrel. When the seedlings get large enough, they will be moved to other areas to replace earlier planted lettuce. 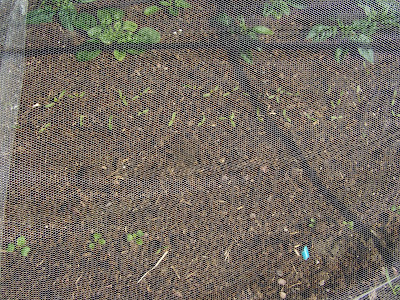 Under the nylon netting, the spinach is beginning to put on some size. Seedlings of beets and turnips, as well as a later planting of spinach, are showing. The chard has yet to make an appearance. 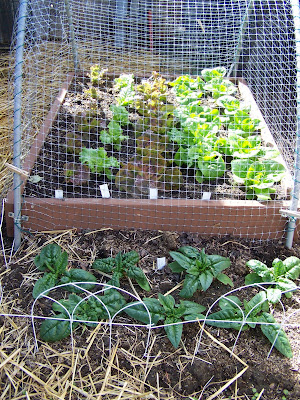 The under-cover bird protected lettuce is providing us with all we and Cookie can eat. The two rows on the left were just picked of their outer leaves, and the three rows on the right will be next. The spinach, in the foreground, is already showing a few leaf miner eggs. I do hope the main spinach crop under the netting escapes them. 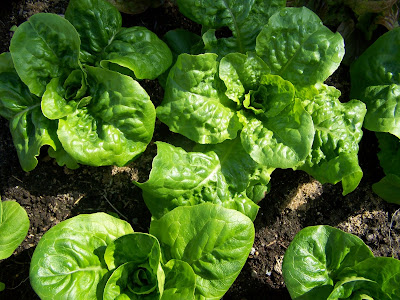 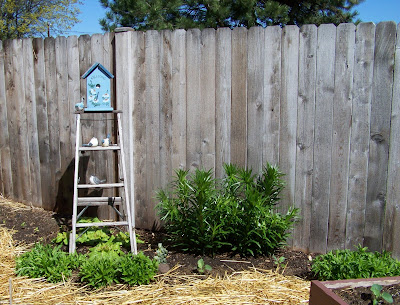 Flowers, lettuces and broccoli are growing well against the fence. 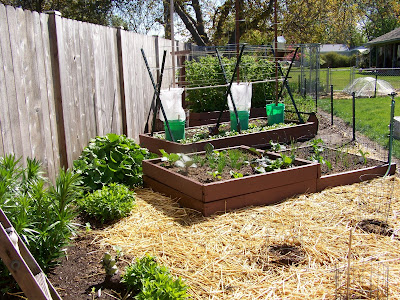 The "North Garden". Three hills of bush butternut squash have been planted in the right foreground. This may cause a problem. I originally planted one hill each of butternut, scallop and bush acorn. Then Mr. Granny and I decided we loved that butternut squash so much, I tried to dig out the seeds of the other two kinds. I only found one of six seeds, but I went ahead and planted a couple of butternut seeds in each of those two hills anyway. Until they grow and bear squash, I'll not know which types are growing! Granddaughter Alicyn visited us Friday, and I put a pillow on the sofa for her to use if she needed a nap. Otto thought I put it there just for him. Isn't he adorable with his little dwarf legs and his fat tummy?