It's been a while since I've posted garden pictures, so I'll break this down into several posts because there are so many of them.

First, let me get the complaints off my chest. The neighbor's weeds. I can't get good pictures of the "East Garden", with all those weeds in the background! 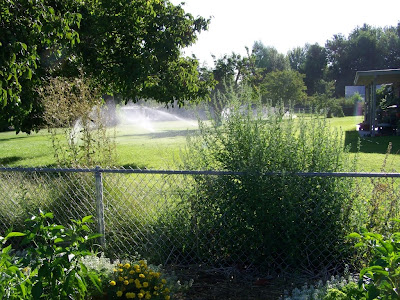 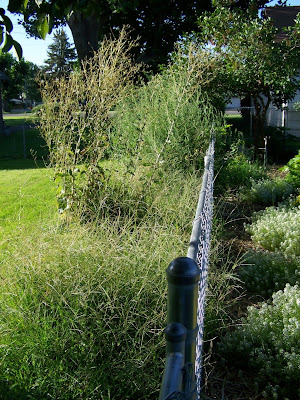 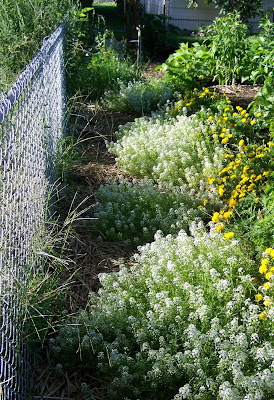 Ugly, huh? You can see, in the bottom photo, how they are coming through into my pathway. Some of the weeds are taller than I am. Would I dare reach over the fence with a weed eater and whack them down? My son Scott and I did cut back her hedge, but only where it came onto our property. It had grown so huge and wide, we could no longer get our lawnmower into the back yard! This narrow strip is the only path for the riding mower. Oh, how I miss my old neighbor Pat. she had the hedge professionally trimmed three times a year. 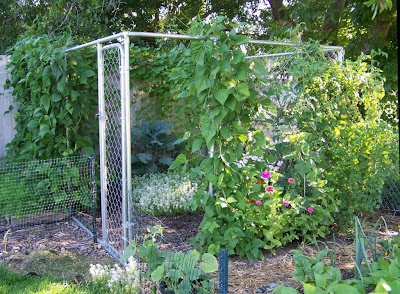 This side of the kennel, the entry to the East Garden, has been planted with Fortex pole beans, a pot of Bush Champion slicing cucumbers (not doing nearly as well as the Spacemaster I've planted in previous years), a Russian Baby tomato and some zinnias. There is also a pot of slicing cucumbers next to the fence on the left, moved from it's former location next to the weedy fence. 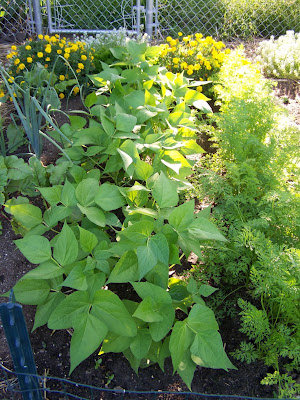 From left, a few late beets and onions, Topcrop bush beans are beginning to blossom, and Burpee A #1 Hybrid carrots are growing well. 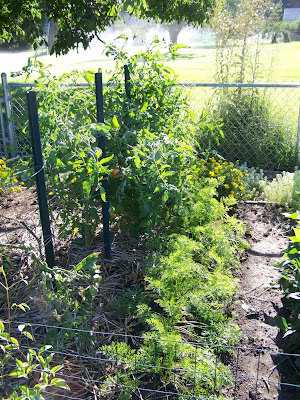 In this bed the Rutgers tomatoes are struggling, and the one in the foreground really needs to be removed. I keep hoping it will come back, but it really won't and it's never going to get any tomatoes. The other two have set some fruits, and might yet have a chance. The carrots are being harvested on an 'as needed' basis, and any time granddaughter Alicyn is visiting. She knows exactly where the big carrots are! 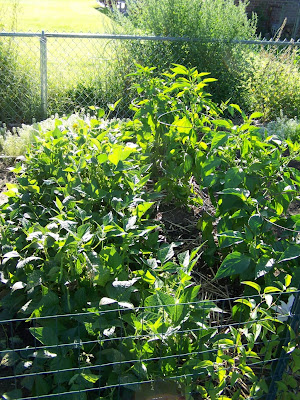 These are the earliest planted bush beans, Gourmet Green French, which are still producing. This variety performs more like pole beans, it just keeps blossoming and producing non-stop. The leaves are beginning to rust badly, so I'll probably pull all the plants as soon as the other bush beans begin producing. Next to the beans are the Quadrato Rosso D' Asti sweet peppers. 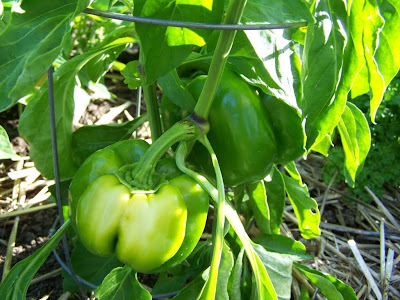 The peppers are looking much better, but unfortunately a few are showing some sunburn. They got off to such a late start, they are just now developing a good shade canopy of foliage. Later fruits should be better protected. 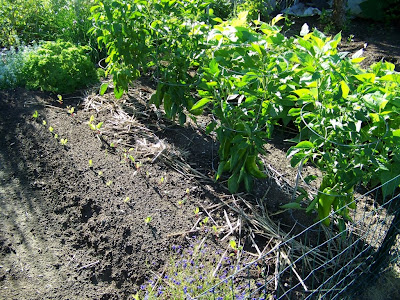 This bed has newly seeded Little Gem lettuce. I decided to chance putting it here, as I thought the sparrows had moved on. It turns out they haven't, so we'll see if they can resist these tender morsels. Next to the lettuce, Ruby Queen beets have germinated. The peppers in this bed are Red Marconi. The fruits are getting huge, I hope they have time to turn red. Several of these also suffer from sunburn, and will have to be picked early. 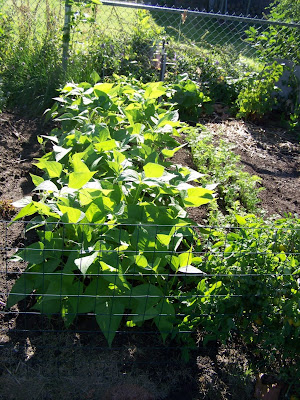 Another new bed of Topcrop bush beans that are blossoming. Next to them is a triple row of Burpee A #1 Hybrid carrots, the final planting of the season. In the foreground is the volunteer Minigold tomato plant,, which has been pumping out a seemingly endless supply of good sized cherry tomatoes. What a work horse for such a small plant! I do wish I had stuck it in a pot, as it probably could have been moved to Arizona for the winter. I still have some seeds, maybe I should start another one. 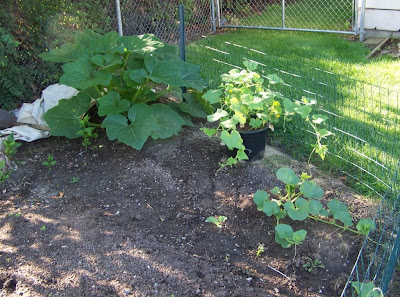 The south end of the East Garden has a hill of yellow crookneck squash, which has a few male blossoms, and the cantaloupe that's growing from seed from one we ate earlier this year. I also moved this (and one more) pot of cucumbers from path next to the neighbor's fence, as they were tangling their tendrils in the jungle of weeds.