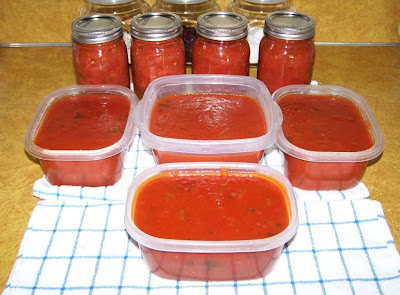 I got the two containers of tomatoes preserved today, but not exactly the way I had planned. I wanted to can them all as "diced tomatoes". It's a very time consuming process that involves scalding, peeling, coring, removing seeds and gel, then dicing the tomatoes. I had a large pot full ready to heat to boiling, but my boiling water bath was still just at a simmer. I am still getting used to this new ceramic cook top, and I was expecting the pot to boil much quicker than it did. By the time it finally began bubbling, the diced tomatoes had cooked to mush! So....instead of seven pints of diced tomatoes, I spooned the mixture into four jars and processed them as crushed tomatoes. I quartered the other container of raw tomatoes into the leftover juice and crushed tomatoes, added some fresh bell peppers, onions, basil, oregano, salt, pepper and sugar, then boiled it down until it had thickened. I filled four containers with a total of eleven cups of the seasoned tomato sauce. It's cooling, and will be frozen then removed from the plastic containers and sealed in vacuum bags for the freezer. So ends my first day of canning in 2011, as meager as it was.