Yes, it's still Thursday here in the Northwest!  I know I'm late, but....better late than never?

Really, not much has been happening around here about which to blog.  We were expecting to be busy watching our new doors and windows being installed on Monday and Tuesday.  The glass company truck rolled into the driveway bright and early Monday morning, and two workers got busy double checking all of the measurements.  They were just about ready to remove the first of the three large living room windows, when I happened to notice the doors and windows in the back of the truck.  "They look awfully white", said I.  "They are white", said he.  "But....", said I, "I ordered almond frames".  The worker grabbed the order sheet and said "It says white on the order".  He flipped to an inside (original order) page.  Hmmmm.  It said Color: almond.  Next page....Color: almond.  Third page....Color: almond.  Somebody had messed up royally!  Worker made a call to the office, then informed me the white doors and windows would be returned, and a rush order put in for the almond ones.  It's now late Thursday, I've heard nothing more from the company, so we have no idea when we will, if ever, get them installed.  Since I've already paid for half of the total cost, I'm hoping it will be soon.

In the meantime, we removed the pet door insert from our dining room sliding glass door, and had son John over to help with the installation of a new "in the wall" unit.  Mr. Granny and I had built new steps for the outside.  We couldn't have Annie and Otto flying through the door and out into open space!  We built the steps extra wide, not knowing yet just exactly where the new opening would be situated.  As it turned out, the new door is way off center, but I have plans for a little wall hanging (dog bone name plates on rope) next to it.  That should center everything nicely. 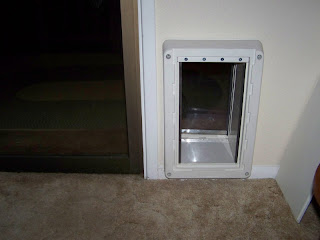 The new doggy door had two clear flaps, but Otto was afraid of them so we removed the inside flap temporarily, hoping he'll get used to it at a later time.  He was so funny!  There was no way he was going through this thing, even though it's exactly the same size opening as the old door, and situated just a few inches to the right.  Annie went right through, with no hesitation.  We coaxed and pleaded with Otto, but he just cowered and ran to the kitchen door.  I finally picked him up and pushed him through the doggy door.   Mr. Granny grabbed him and pushed him back out.  Didn't work, Otto was still cowering in fear of that door!  Just then, Annie came out through the door, down the steps and gave Otto a poke with her nose.  She turned around and went back inside through the new door, and Otto timidly followed her!  I was absolutely flabbergasted!  I know she was showing him what to do.  Shortly afterward,  Annie went back out through the door and Otto followed her.  Today he has used it several times, but he usually waits for her to go through it first. 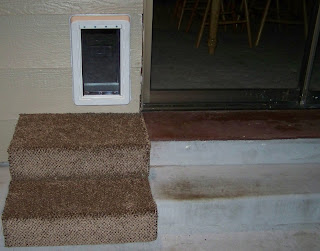 Their new carpeted steps are just an extension of the concrete steps they were using before.  Once I get their name plates on the wall next to the doggy door, and we get the new patio door installed, and I get the patio steps painted....*sigh*....one thing always leads to another, doesn't it.  I'm afraid the door installers are going to have a difficult time adding the 2" brick molding trim around the new door now.  John should have installed the doggy door a bit farther to the left.  Oh wells, too late now.

But I digress.  It's Thursday's Kitchen Cupboard, and I have done a small amount of preserving.  I canned 5 half pints and two pints of sweet chili sauce last week.  Today I froze 3 pounds of green beans and three pounds of green bell pepper strips, and canned 4-1/2 pints of ketchup. 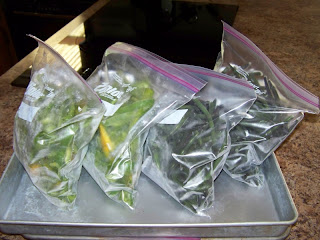 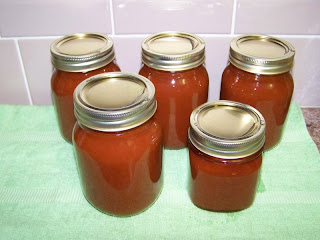 Today's batch of ketchup gives me 7-1/2 pints total for the season, which should probably be enough to last us for an entire year.

Join Robin and others for Thursday's Kitchen Cupboard!