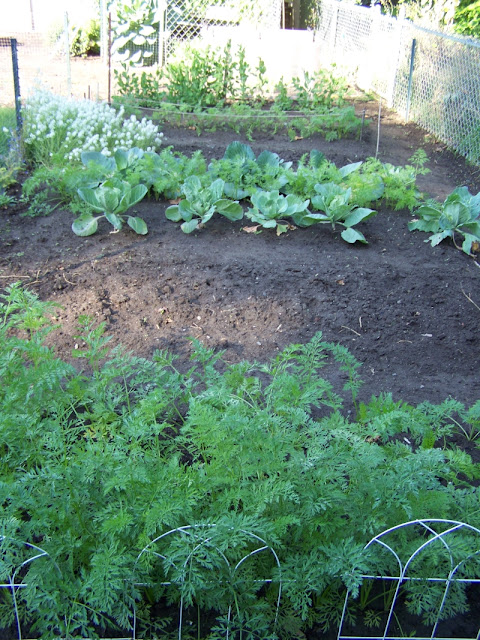 The east garden, with carrots, cabbages and peas.  All of the bush beans have been harvested, and the plants pulled. 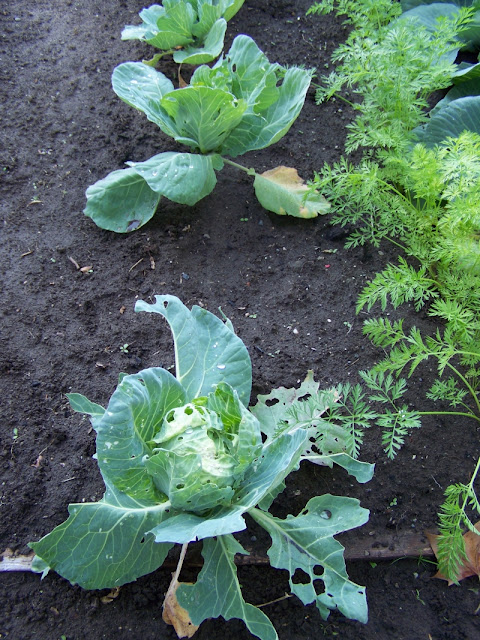 The remaining cabbages are so chewed up, I doubt they'll ever see a harvest.  None of the other cabbages were damaged like this, even those in the row on the other side of these carrots were perfect. 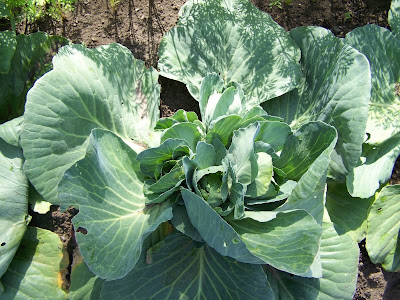 Most of the good  cabbages have been harvested, I think there might be two small ones left.  I cut some of them off rather than pulling them out.  If you do this, leaving a few of the bottom leaves on the plant, they will grow a bunch of mini-heads!  This one has developed about six little heads in the 2-3 weeks since it was cut.  Each head is about golf ball sized so far. 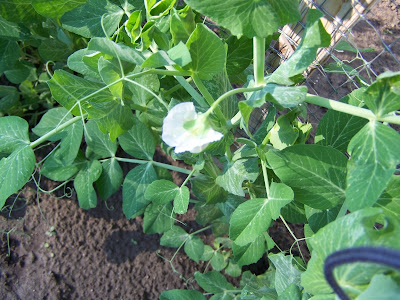 The first blossom on the fall peas.  My fingers are crossed that I'll get even a small harvest from them. 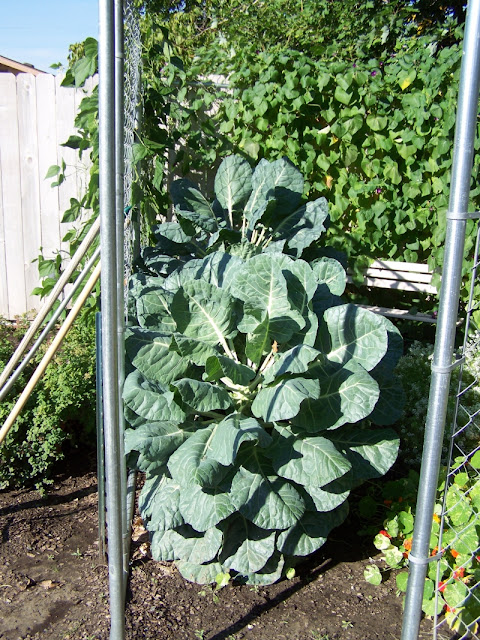 The Brussels sprouts plants are 3-4' tall, but the sprouts are tiny.  About the size of a pencil eraser!  Grandpa Ott morning glories have nearly obliterated the bench.  They don't blossom as well in the kennel garden as they do behind the garden shed.  I think it's just too shady for them.   Nasturtiums and alyssum carpet the inside, barely leaving me enough room to walk back to the bench. 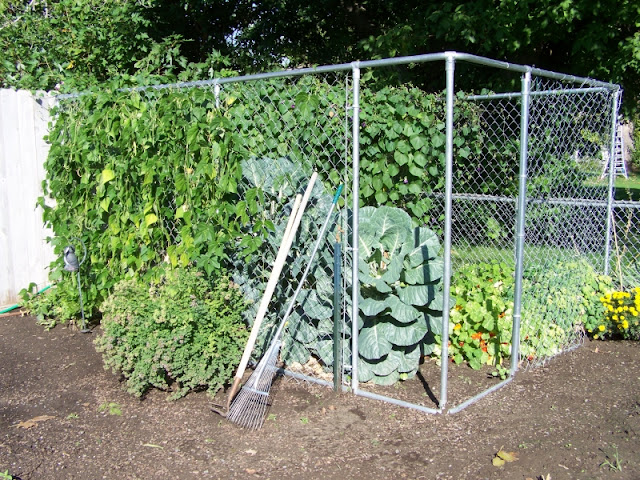 The last planting of Fortex pole beans climbs the outside of the kennel fence.  That's a pot of oregano in the foreground.  I never did pick any of it, I just let the bees enjoy it all summer.  I actually picked so few herbs this year, I stopped keeping a weight tally early on.  I still had several jars of dried herbs from last year, so I only used a few sprigs of fresh parsley, basil and chives as needed for cooking this year. 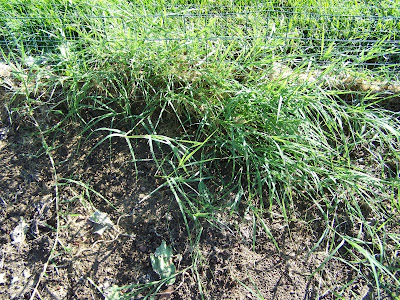 YUK!  Bermuda grass has grown where the squash vines once lived.  I have a lot of digging to do before it takes over the entire garden! 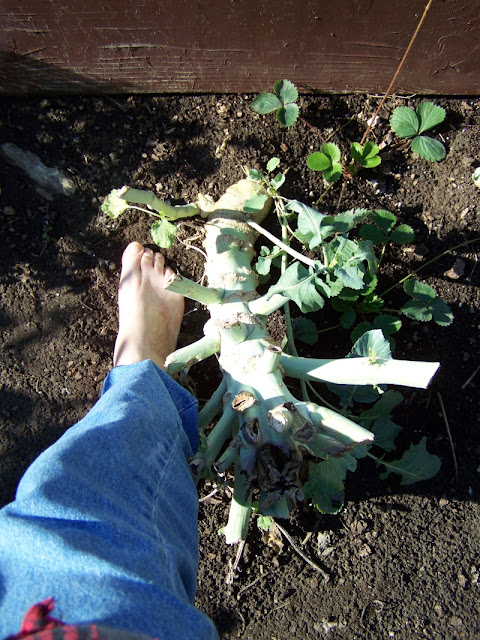 Speaking of digging, look at this broccoli stump I'll be digging out.  That was the plant that was giving me most of those broccoli side shoots, right up until I chopped it down.  It was almost five feet high! 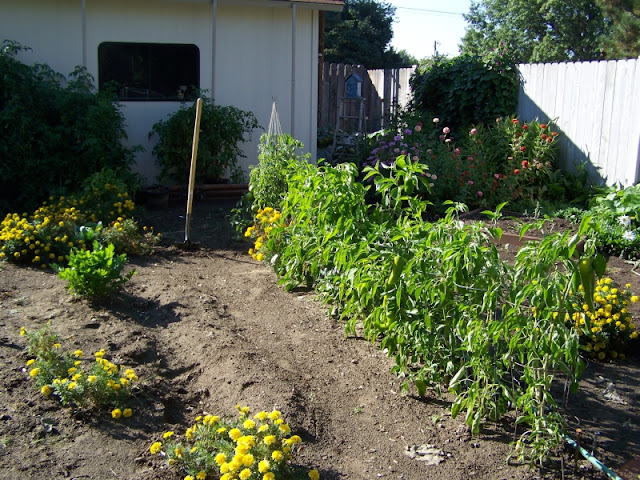 Not much going on in the north garden now.  Peppers, a few tomato plants, a stray celery or two, and the strawberry bed.  Even the marigolds are looking worn out. 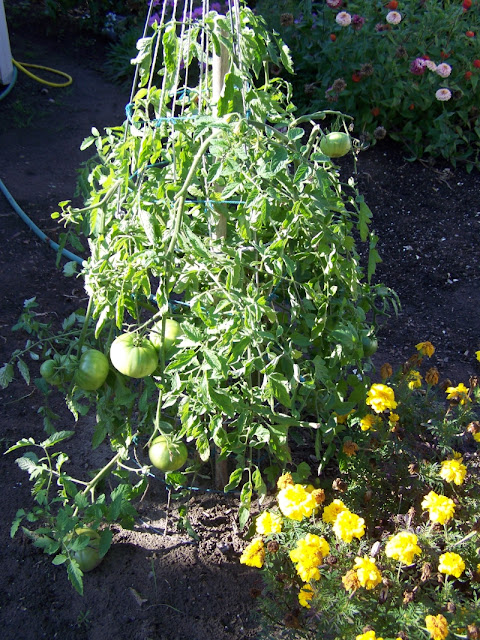 This volunteer Cherokee Purple tomato plant has been our main source of slicing tomatoes this year. 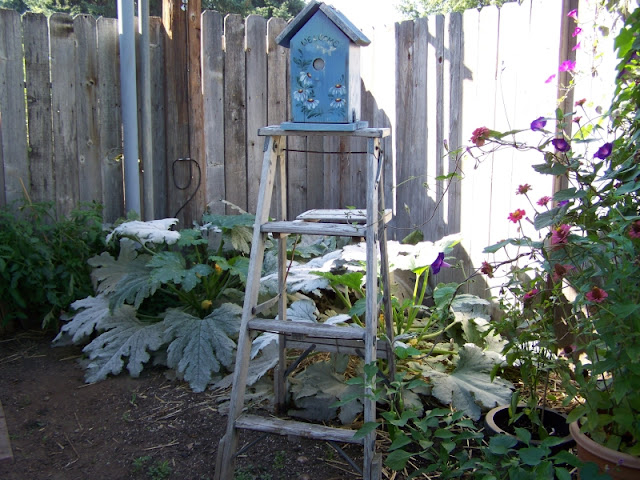 The zucchini plants are covered with powdery mildew, but still blossoming and fruiting.  The ladder is finally free of its cantaloupe vines.  A few pots of peppers are still alive and blooming, but not very productive. 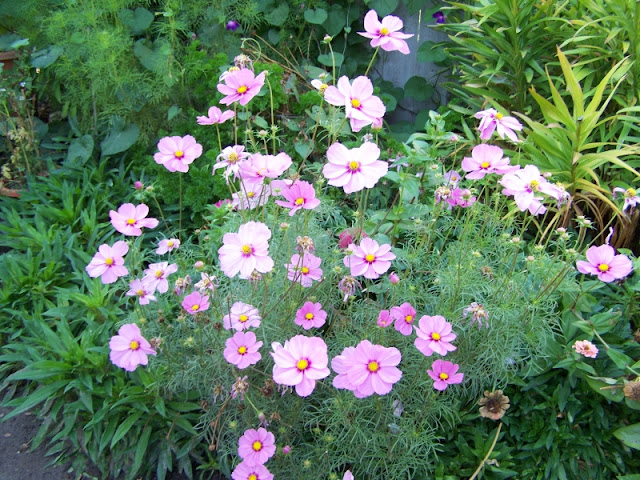 The volunteer cosmos were very well behaved this year, unlike the ugly "trees" I grew last year.  They were probably the prettiest flower in the garden. 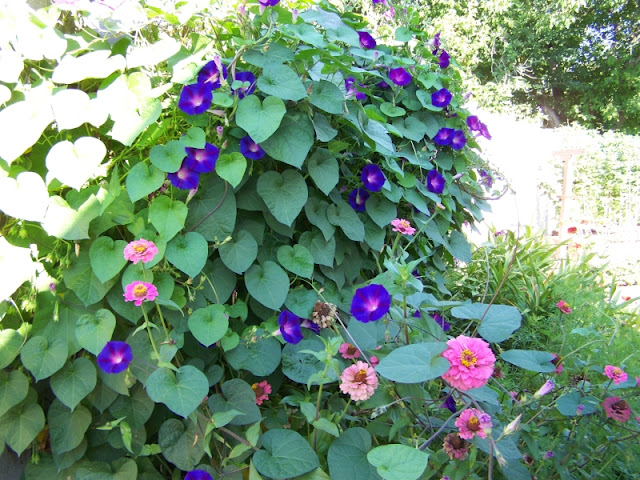 Mr. Granny's favorite was Grandpa Ott morning glory.  This one, behind the garden shed, blossoms most of the day.  This photo was taken around 3:30 in the afternoon!

Our first frost will probably happen in about two weeks, so I'd like to get as much garden cleanup done as possible before the weather gets cold.  It's always sad to see the end of the gardening season approaching, but I think I'm just about ready for a long winter's rest!