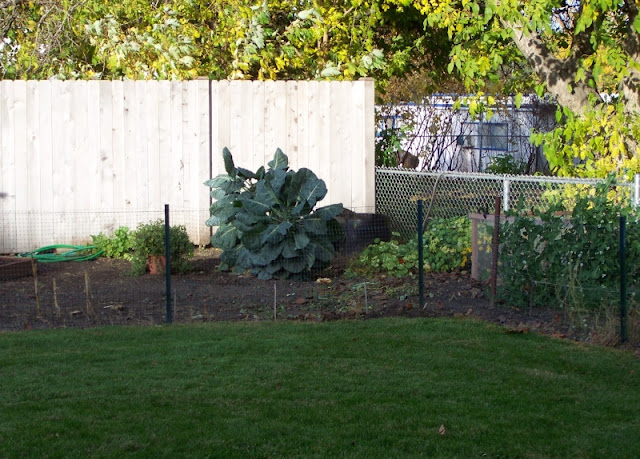 It looks so bare back there in the corner of the garden.  Like something is missing....... 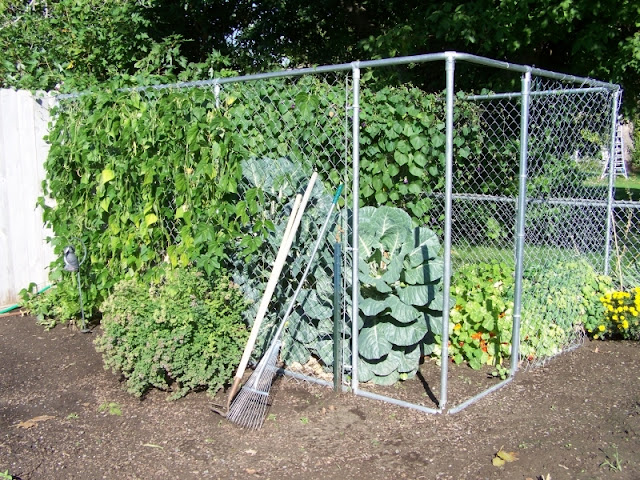 Oh, I guess it would be the kennel garden!  Where did it go? 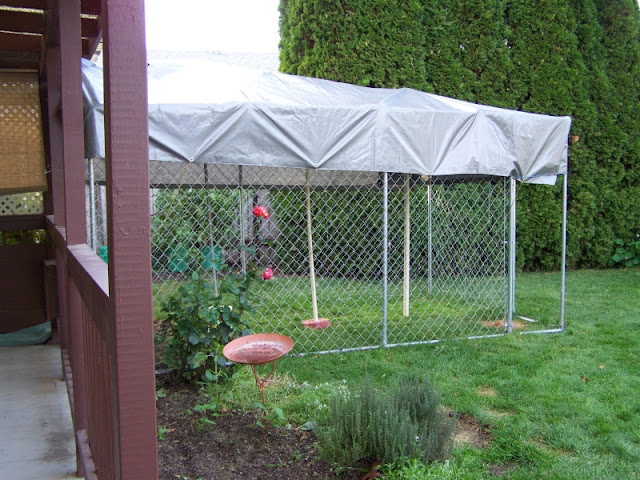 Aha!  There it is, over by the patio. 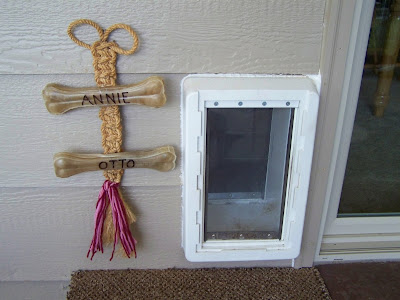 Annie and Otto can come out of the house through their pet door.  This thing is great.  It has double flaps that really keep the cold air out of the house.  I had to remove one of the flaps until they got used to using it.  Their old pet door was an insert into the sliding glass door, and the depth of this in-the-wall unit took a bit of getting used to.  I put the second flap on after about two weeks, when they were completely comfortable with the door.  Now they think nothing of going through both flaps. 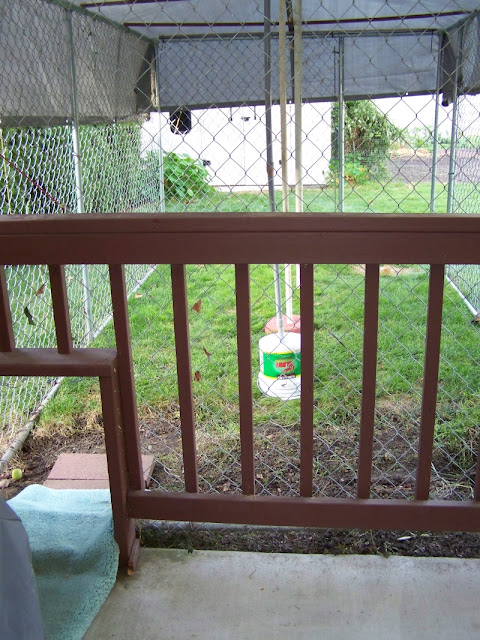 It's almost a straight shot to the  opening in the patio railing, so they can enter their new winter outhouse.  Yes, my dogs refuse to go out in the rain or snow to "do their business".  We've always had to take them out to the front yard, under the pine trees in bad weather.  I don't like to do that, as it's very close to our rather busy street.  I'm always afraid they might run out after a squirrel and get hit by a car.  I thought the kennel, with a heavy tarp cover, would give them a nice patch of dry grass for the winter, and be easily accessible by us for cleanup.  I left the sides uncovered, thinking maybe I'll add some clear plastic before we get snow that could blow in.  I also didn't put in gates.  They can go in and out from the patio or from the yard.  I put some boards across the top  to keep the tarp from drooping, and hooked one end of the tarp up under the patio roof so rainwater would run off.  It got the ultimate test last night, and this morning we had big sagging pockets of rainwater all over the top!  Thus the odd poles sitting on whatever we could find to raise the center of the tarp up.  Looks kinda dorky, but if it works.....

But.  Isn't there always a but?  Annie and Otto are afraid to go in the covered kennel.  They weren't afraid of it when it didn't have the tarp on it, but now they are scared.  I even got down on my hands and knees and crawled through that little opening, trying to get them to follow me.  The ran through the rain and met me at the gate opening on the other side!  Thankfully Mr. Granny didn't have a camera on him when I got stuck halfway through the little hole.  I had to drop down on my belly and pull my way through with my elbows!

Last night, when it was time for them to go out and it was really pouring rain, both dogs went to the front door.  I refused to take them out, and opened the back door and called them out to the patio. I stood there yelling "go pee!" over and over, as they sat and rolled their eyes at me.  I didn't give in.  I stood by the small opening to the kennel and continued to demand a pee.  I'm sure my neighbors think I've lost my mind.  Let me tell you, dachshunds are stubborn little creatures.  Annie finally turned around and walked over to the patio entrance and out into the pouring rain....and she squatted.  Otto watched, then he followed her out into the rain and he squatted (that's my boy!).  Then they both ran as fast as they could, back to the patio and through the doggy door.  That pouring rain was less frightening than the monster kennel.

If the weather is nice tomorrow, I think I'll take a lawn chair and a book out there and just sit in the kennel.  Maybe the dogs will brave up and join me.