The September garden gave me one last good week of harvests.  The total for the year went over 950 pounds, but unless we get several more weeks of warm weather for ripening tomatoes (not likely, a frost is now predicted for Thursday) there is probably no way I'll break 1000 pounds this year.  There's really nothing very heavy in the garden now.  I have quite a few carrots, a few pole beans and some peppers.  If I end up using the final five butternut squash, I might come close.  In any case, it's my second biggest year of pounds harvested.  It beats out 2011, 2010 and comes really close to my record year of 2009. 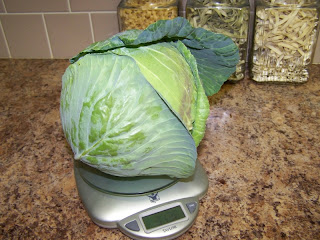 Son John took home this nice mini-cabbage.  It was big for the Pixie variety at just under four pounds.  I also sent a couple of the butternut squash with him. 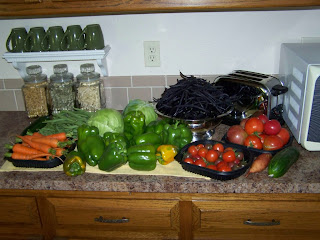 I kept the other two cabbages picked that day, along with Fortex pole beans, lots of Velour bush beans, carrots, sweet peppers, tomatoes, a cucumber and a sweet potato. 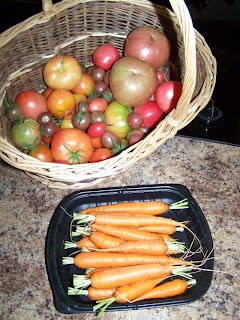 A nice variety of tomatoes, and some more pretty carrots.  Hardly any of the carrots got very large this year.  Those that did tended to be split open and inedible. 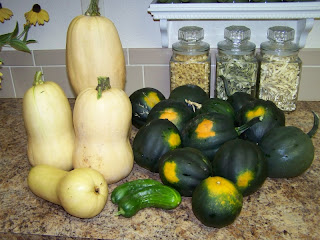 Of course, way too many butternut and acorn squash.  They'll join the others in storage in the garage.  The last two cucumbers were picked, and the vines pulled. 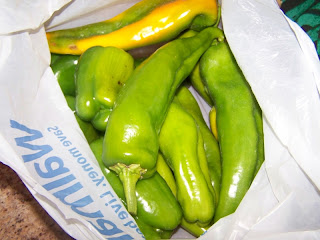 Son Scott was begging for sweet peppers, so he picked and took home a bag of them, nearly 3 1/2 pounds. 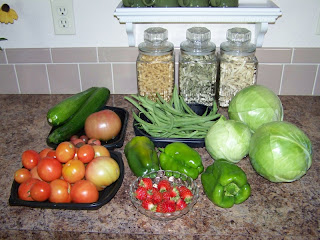 Zucchini and pole beans are still producing, and the strawberries are just beginning another round.  These might be the last three cabbages harvested.  There are several more in the garden, but they have been badly chewed up and stunted in growth.  I'm starting to pick any tomatoes that have even a little color, and I've given up on getting any more red, orange or yellow peppers this year.

Daphne's Dandelions is the host for Harvest Monday, where everyone can share links to their harvest for the week. Please visit her blog and leave a link, so we can enjoy your harvest photos!