This wind gathers fallen autumnal leaves,
Just to dash them to the ground.....Ray Clune

We had an early morning wind storm, with 40 MPH sustained winds and gusts of 55 MPH.  Our electricity was off for about four hours, and my son called and said they were still having a brown out on the other side of town.  We didn't have any damage, at least none that I've discovered so far, but our next door neighbor's pine tree went down on her neighbor's new chain link fence.  My daughter manages a manufactured home park about ten miles from our place, and it sustained a lot of damage. 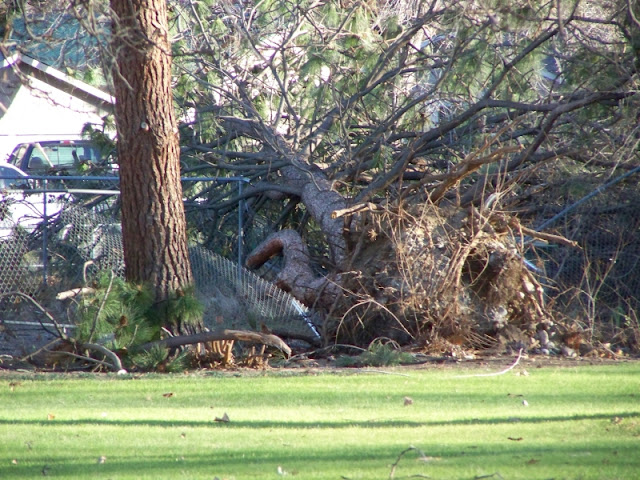 Tree down next door.  Too bad it wasn't her half dead walnut tree that hangs over my garden. 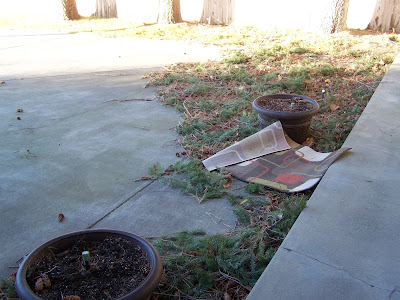 No damage at our house, but oh....what a mess of pine branches we have to clean up!  At least it's warm today.  Instead of our normal low 30s December temperatures, it's about 50 and sunny.  We'll wait until tomorrow though, as the wind advisory is in effect until 4 PM today. 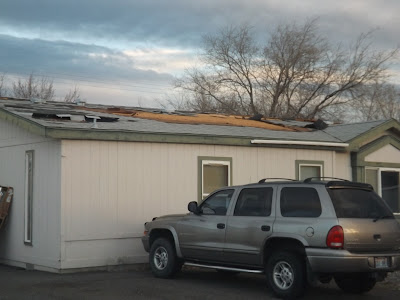 She said lots of homes had shingles ripped off. 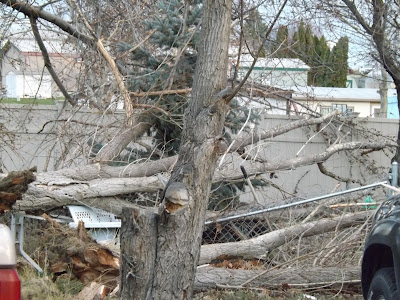 She noticed some trees were down. 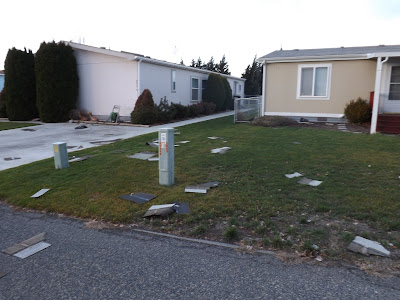 The park is littered with shingles.

Daughter's shingles are intact, but her flag pole is down.  It looks like quite a few people lost attached structures, like patio covers and carports.

We've had worse wind storms in this area.  They are quite common in the spring, but I don't remember ever having this kind of weather in December.

We just took a drive around our neighborhood, and there was quite a bit of damage.  We saw at least a dozen large trees uprooted, fences down and shingles off of the houses just in about a six block radius of our home, so we really lucked out with the downed pine branches.  Just one house down from us, at the corner, there is a large tree across the road.  The neighbor's tree (shown in the first picture) was a huge one, the top of it is clear over at the edge of the next street up.  Luckily, it fell between two houses, so the only damage was to the chain link fence. 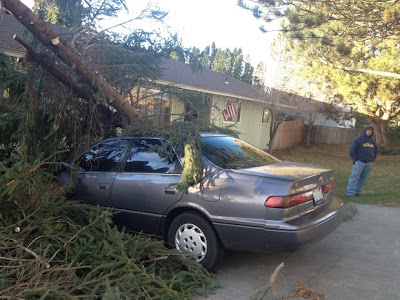 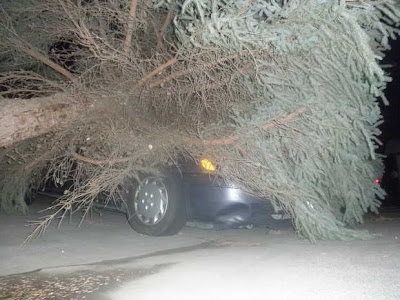 At least two nearby neighbors had trees toppling on their vehicles.

I went out front to begin cleaning up the pine branches and pine cones.  I filled the (empty) big garbage can and didn't even make a dent in the mess, which included branches from trees not even belonging to us.  It was much worse than it looks in the photo.  The wind was still strong, and cold.  I could only take about 30 minutes of it before giving up.

*From our local newspaper:  The National Weather Service in Pendleton says winds peaked in the Tri-Cities between 4 a.m. and 9 a.m. The highest was a 83 mph gust recorded near Horn Rapids at 5 a.m., but there was a 63 mph gust just west of Kennewick at 4:46 a.m. and a 70 mph gust recorded at the Tri-Cities Airport at 5:15 a.m., said Dennis Hull, a meteorologist.  Gusts of more than 100 mph were recorded on Rattlesnake Mountain.