We have a flowering plum tree in our front yard.  I'd say it's 15-20 years old now, and it has never fruited.  It's not supposed to.  But this year we have plums!  They are very small, they look rather like Bing cherries.  I happened to notice them today, so I plucked one off the tree and popped it into my mouth.  Mr. Granny had fits, and insisted it was probably poisonous.  I said no, it's a plum tree, it has plums.  Very good tasting plums!  Sweet, juicy plums!  While visions of (sugar) plums danced in my head, I picked a few.  Mr. Granny said "They have worms".  I said I hadn't seen a worm in the one I ate, but then again, I didn't even really look, I just ate.  I picked a few more.  Even if they had a tiny worm or two, I could flick them out.  It wouldn't bother me to eat them as long as the worm was gone.  I took them in the house and cut one in half.  Or, at least I tried to cut it in half.  It turned out to be one of those that will not come loose from the seed, so I just had to kind of gouge it away.  And there was the worm.  I tried another.  Another tiny worm.  Like I said, it wouldn't bother me to eat them, once the tiny little worm came out, but there was no way I could open every one of those little fruits to check them out.  The only way they could be eaten is to pop the entire thing in your mouth and chew the fruit off of the pit.  I'm sure I've consumed worse things than those tiny worms, but I just couldn't do it! 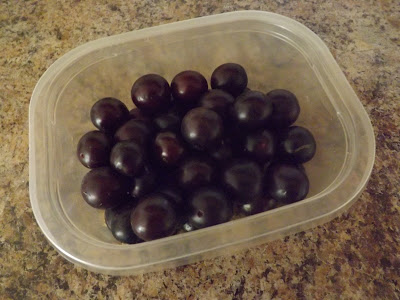 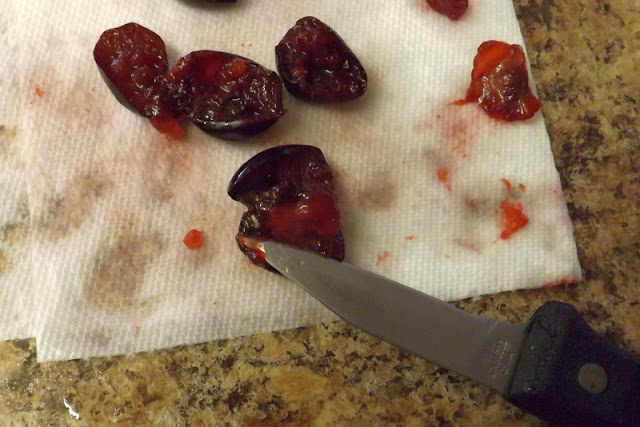 I had to open 3 more of them before I found one with a worm.  It's right above the tip of the paring knife.

So....since I couldn't do plums, I did sauerkraut. 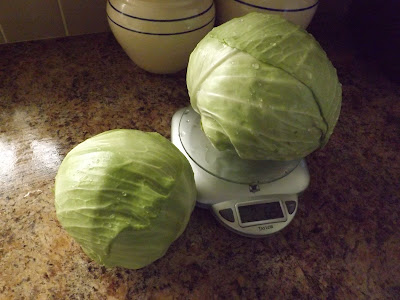 I went out to the garden and picked two more cabbages to add to the two I had in the fridge. 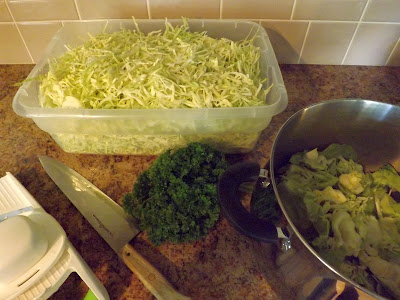 Since my (almost) new Cuisinart food processor broke while grating a piece of mozzarella cheese, I had to use the mandolin to slice up five pounds of cabbage.  We'll discuss the Cuisinart in a separate blog post.  And maybe the piece of crap new Black and Decker electric can opener. :-( 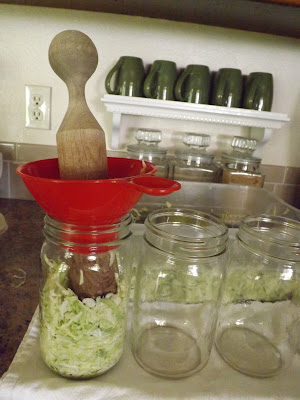 After mixing in some salt and then letting it sit for an hour or so to go limp, I packed it firmly into clean quart jars. 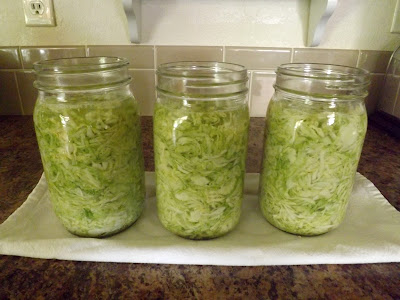 I smashed it into the jars until the brine covered the surface, leaving about an inch of headspace. 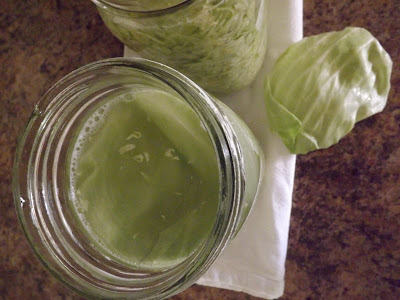 I cut some cabbage leaves to fit the top, then pressed them down over the contents until the brine rose above them. 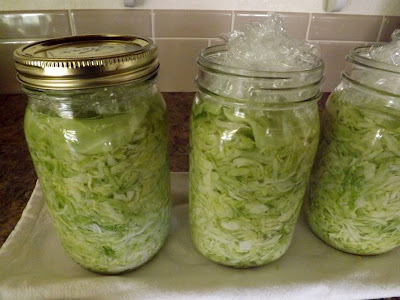 Then I used some crumpled plastic wrap to ensure the shredded cabbage would stay under the brine. 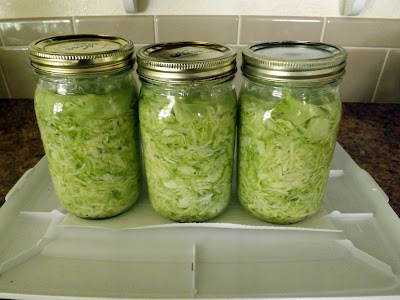 Lids were put on, and the jars were set on paper towels on a large plastic lid.  They went out to the garage, where they will stay fairly dark and cool for the next 6-8 weeks.  I'll check them every few days to make sure the brine is still covering the cabbage.  If any has seeped out, and it usually does, I'll dissolve a tablespoon of salt in a cup of cold water and add it to the jars. 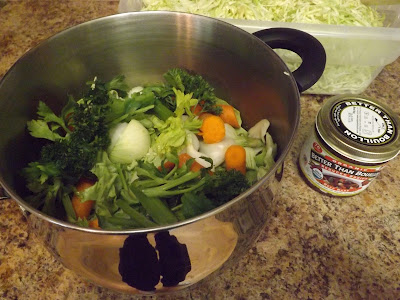 There were a lot of outer cabbage leaves, and bits and pieces that didn't go through the mandolin, so I decided I needed to use them to make a big pot of soup.  I tossed the scraps into the pot with parsley and onions from my garden, carrots and celery not from my garden, some beef soup base and water. 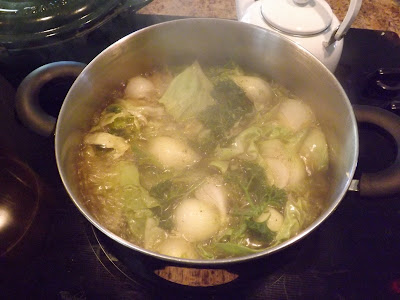 I simmered it for a loooong time, then strained the resulting broth into another pot. 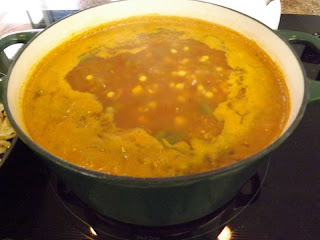 I pureed the carrots and added them back into the broth, then added corn, peas, green beans, carrots, diced tomatoes, a can of white beans and a lot of course ground pepper.  I simmered it for another loooong time.  Oh, my, it was the best soup!  I had a huge bowl of it for my dinner, saved some for the next day, and froze the rest.

So....the plums were disappointing, but the rest of the day was quite productive!