If you've been reading my blog, you probably know by now that Mr. H and I don't work well together. I'm surprised our marriage has held together for 46 years, as we never, never agree on how to do anything. Anytime we have a project to work on, we seem to muddle through it like Dumb and Dumber. Surprisingly, it usually turns out pretty well in the end.

The dog fence at the Arizona property is nearly finished, amid a lot of teeth clenching and tongue biting by both participants.

Will anyone but me notice the front gate is off six inches to one side? I measured and I marked, but I didn't stay around while Mr. H dug the holes and cemented the posts with utter disregard to my measurements and markings.

Will anyone but me notice that Mr. H set one end post with the inside edge on the mark I'd made for the outside edge, which will result in the fencing being installed inside the posts on one end rather than outside the posts as on the other two sides?

Just another week in the life of Mr. Dumb and Mrs. Dumber. But we can rest now, assured that the doxies will be safe and sound in their new play yard. Until they figure out how to dig under the fence, that is. If that happens, we'll have to head up the mountain for big rocks to lay along the bottom of the fencing.

Now we have to install posts, railings, pickets and a gate on the south end of the porch to secure that area. I'm sure it will look much nicer then the 1/2 sheet of OSB that is tied to the barbecue on one side and the heat pump on the other to keep the pups on the porch! This means another 3 or 4 days of bickering over how to do it (I usually get my way *grin*) and then, hopefully, that will be our last big project for the year.

Hey, you guys out there. If you ever have to dig holes for fence posts, or if you need to dig a trench and you have rock hard ground like we have here in the desert, build yourself a water pick! This thing is a real back saver. Hook it up to a garden hose and it blasts a stream of water down through that dirt in nothing flat. It makes quick work of burying fence posts or laying underground cable or irrigation lines. 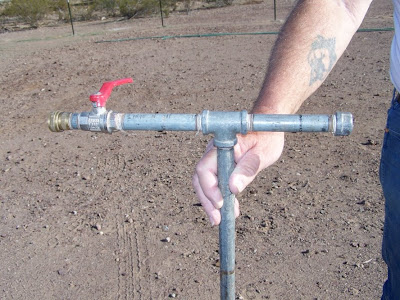 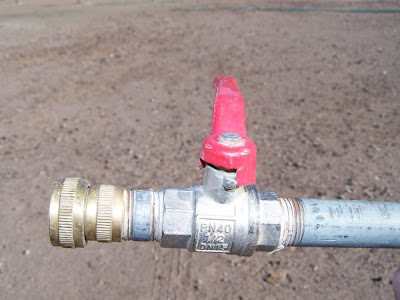