Last night I lifted the lid of the mini-greenhouse that held the Tumbling Tom tomatoes that I started last Wednesday, so that I could mist them. Surprise! Those little stinkers had sprouted and grown leggy overnight! So here I was, with four babies to care for and no light setup. I kept the dome off of them and set them in a cool area of the house for the night. As soon as I got up this morning, I set up a single florescent light over them. 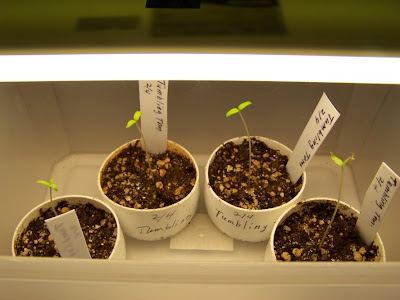 I was still concerned about how leggy they were, so I cut a toilet tissue roll into three 1" lengths and placed them around three of the seedlings. I then back filled the cardboard rolls with potting soil. I only had one empty roll on hand, I really needed two of them cut in half, as there is still a good inch of stem exposed. I don't know if this method will do any good, but tomatoes grow roots along the entire length of their stems, so hopefully it wont hurt to give it a try. 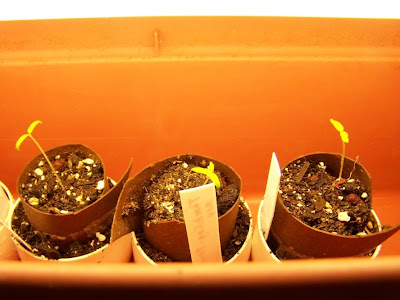 They will have to live on top of my microwave until it's time for their trip to Washington next month. In a couple of weeks, it will probably be warm and sunny enough here to set them outside for their light source. 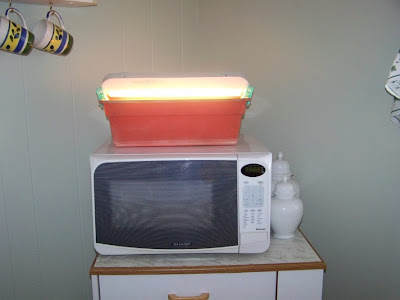 I had a second picking of greens from the little Arizona garden today. This time it included a bit of spinach, which looks like it might actually have begun growing since being transplanted. And one onion, that hasn't grown a bit since it went in the ground, but sure has developed a good root system! My bunny, Cookie, isn't going to get this salad. Mr. H and I are going to enjoy it ourselves. 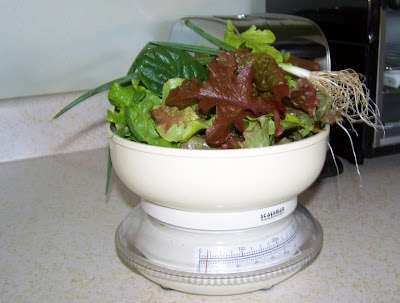 The little garden continues to grow. Look closely, I think the spinach is looking larger, don't you? The beets have certainly put forth growth, as has the parsley and the lettuce (which has already been picked once). 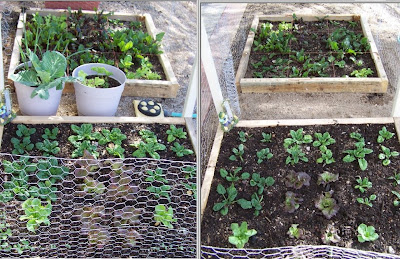 The peppers I planted on January 24 from saved seed have done nothing. I'm not sure how long I should keep babying them, but I guess I'll give them another week. In the meantime, I bought a packet of bell pepper seeds and started another batch. I found out they germinate best at 80F so, not having a seed starting mat for heating, I grabbed the next best thing....my heating pad. With a wire rack between the pad and the mini-greenhouse, the temperature stays at exactly 80F all night. In the daytime they get moved to the top of the refrigerator, where they also maintain a constant 80F temperature. 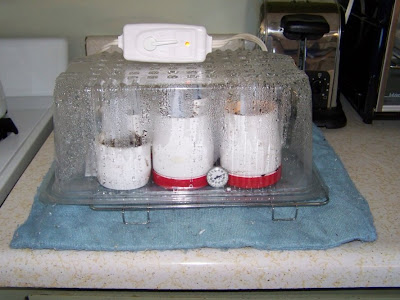