I shot that radish eating rabbit this morning! Not with a gun, with the camera. He was digging a tunnel, about three feet from the salad garden....is he planning an underground attack? Notice the smaller air hole to the right of the hole he's in. When I went outside, he had tunneled that far. Bad me....I stepped on his tunnel and collapsed it. No, he wasn't in it at the time. 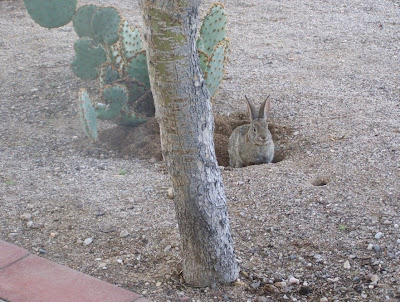 The Tumbling Tom Tomatoes that were started February 4th are growing well. I keep them under the light from around 8:00AM until 11:00PM. On warm sunny days I have been setting them outside for natural sunlight from 11 in the morning until 5 in the afternoon. 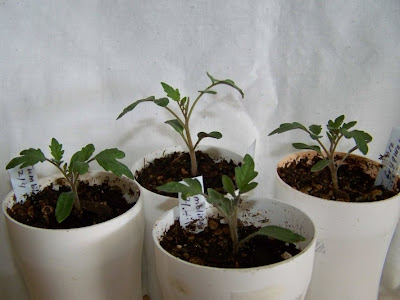 The bell peppers that were planted on 2/7 look pretty good too, even though they have yet to grow their first true leaves. 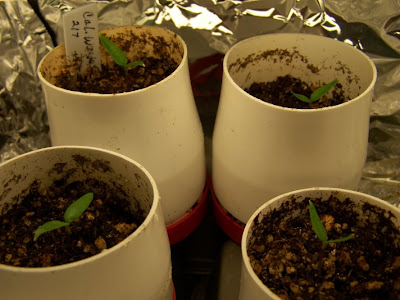 Here is the happy family, snuggled in their foil lined box, basking in the light. I have the peppers sitting up on mini-bread pans to get them close to the light. One tomato is getting so tall, it's getting hard to keep all of them 1-2" from the light source. 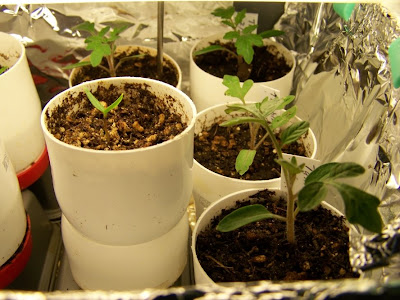 The peppers seeds that I placed on a damp paper towel and put in a ZipLoc bag on 2/15 are showing signs of sprouting today, six days to germination. I doubt I'll use this method in the future, as it only saves a few days and Mr. H keeps throwing them in the garbage can. I have no idea what to do with these sprouts, as my light box is as full of plants as I can get it, and all of them will have to take a two day, 1200 mile journey to Washington in just two weeks. I'll have to put them into an insulated cooler to keep them from freezing, and take them (and their shop light) into the hotel room with me. People will stare, won't they!

When I get home, I'll start all the rest of my seedlings.....at least eight more varieties of tomatoes, more peppers, broccoli, cauliflower, cabbage. I'm looking forward to the present I'm going to have waiting in my mailbox..... 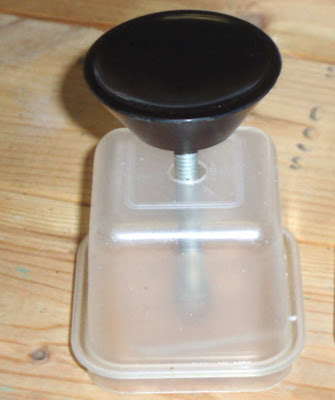 That's a 2" square soil blocker that my dear friend John has made for me! Do check out the different ones he has made on his blog, John's Journal. I really worry about how I'm going to get my little ones out of their pots when it's time to transplant them. The way it is tapered, I might have to cut the pot away from them to keep from destroying the tap roots. With the soil block maker, that will never be a problem. No pot, no damage and no transplant shock! I can hardly wait to try it!

I still like the idea of using the soup containers as seed starting pots, but I should have thought them out a bit better. If I cut off the container in half and plant it with the lid on the bottom, when it's time to remove the seedling I can just pop off the lid and push everything out the large end of the container. Maybe. There's still a metal rim in there that might keep everything from sliding out. Yep.....I think I'm going to like that soil blocker!


Yes, we'll be heading home to Washington in just two weeks. That's much earlier than previous years, but I have some hugging to do! Many of you have been with me since the birth of my newest granddaughter, Alicyn. well, she's four months old now, and I've missed about 3-3/4 of those four months. Who wouldn't want to get back and hug this? 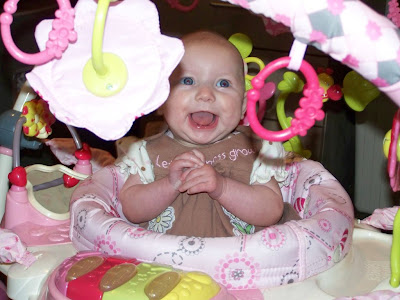 And here are a couple more who need some hugging and spoiling: 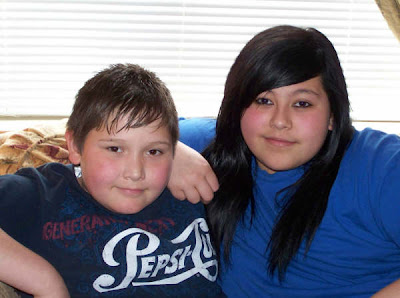