Yesterday, on the Square Foot Gardening forum on GardenWeb, the blogger at John's Journal was showing off some of the soil blocks he'd made with his home made soil block maker. I was kind of kidding around and told of an experiment I wanted to do......John said "Use your imagination and give it a try". So I did.

I wanted to make multiple small soil blocks at a time, and I thought an ice cube tray would be just the thing I needed. I also needed something small, round and hard to make the indented area in the center for holding the seed. John had suggested small round beads, but I didn't have any of those handy. Hmmmm...what looks like a small round bead, that I have right here in the house? 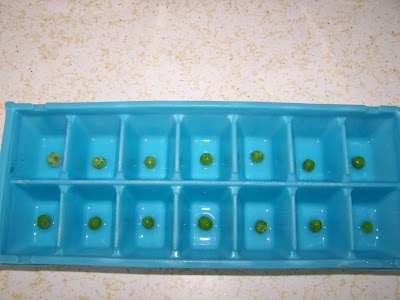 Now I needed a good soiless mix with which to fill them. I had a partial bag of seed starting mix, and some peat blend potting mix that I'd combined for repotting the tomato plants last week, so I poured some of it into a bowl and added warm water until it was the consistency of oatmeal. 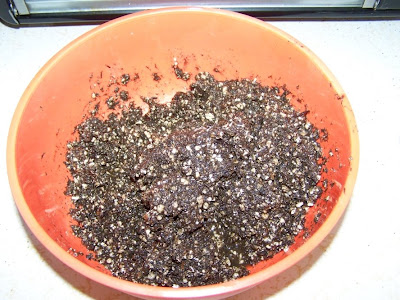 I carefully dropped just a bit of the mix into each compartment. Just enough to cover the peas and hopefully keep them from moving. 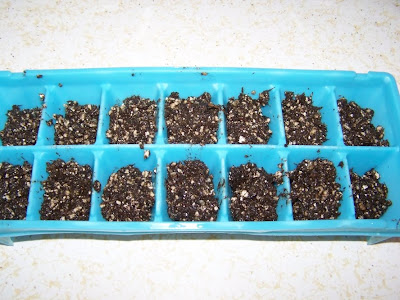 Then I packed the mix into the tray just as tightly as I could press it in. I think I had it a bit too wet, as the water was squishing out over the top, so I took it to the sink and carefully pressed out some of the excess water. When I felt it was sufficiently moist, but not too wet, I placed it into the freezer for several hours. 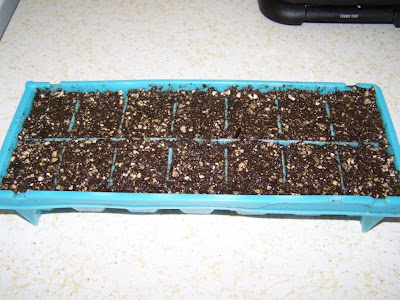 When the blocks had frozen solid, I submerged the bottom of the tray in hot water for a few seconds, just to loosen the blocks enough to pop them out. I placed them on a small tray, and took a paring knife to scoop the peas out of the centers. Most of the peas had stayed in place, only 2-3 were off center. 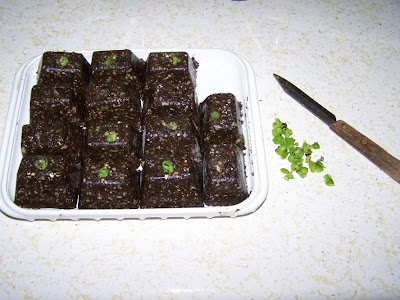 I let the still-frozen blocks sit for a few minutes, then removed any leftover pea that was showing, and they came out much easier than with the solidly frozen cube. 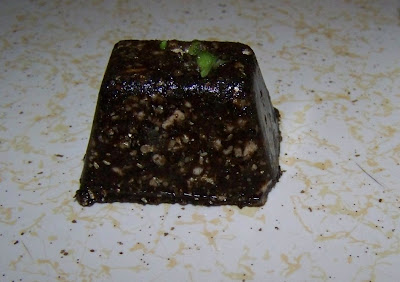 I left the tray of blocks on the counter overnight to thaw and dry out a bit. This morning they were still very wet, but held together beautifully when I picked them up. 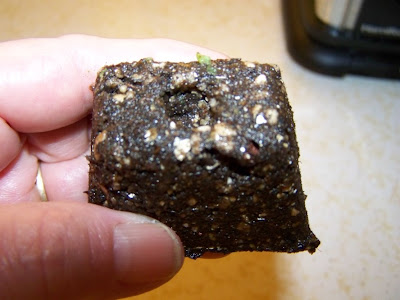 I'd consider the experiment successful! I'll probably use this method to make small blocks for starting things like lettuce, that can go straight to the garden in them. I do think I have some old trays with square compartments, rather than the rectangular ones like this one had. I'll use the larger block maker that John made for me for larger vegetables like tomatoes.

We don't have an ice maker in our refrigerator down here, and Mr. H wasn't real happy that I used his ice cube tray to make soil blocks! I told him just to be sure he didn't use them in his evening bourbon and cola *grin*.

Yesterday I was cutting some dry leaves from the bottoms of my two little cucumber plants. these cucumbers had been planted in a large pot last November, and never did grow into anything worthwhile. The tallest is probably around a foot high, neither looks terribly healthy, but I didn't have the heart to dispose of them. Well, wouldn't you know. While I was removing a leaf, I found a cucumber! It wasn't very big, about the size of a tennis bal, but it was definitely ripe. It will be my one and only cucumber from these plants, as there aren't any others that will mature by the time we leave for Washington. But I can't say they were a failure, can I? I actually got a harvest from them, even though it was only two ounces! 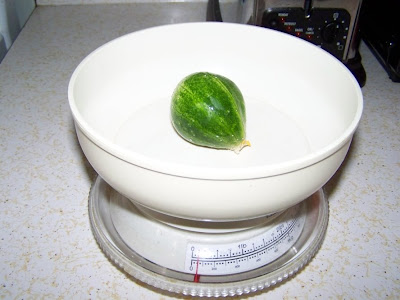 I got another cutting from the little salad garden yesterday. Every week it is an ounce more than the previous week, and this time it put my total harvest over the one pound mark! And Mr. H said it would never grow. I should get about two more cuttings of lettuce and spinach before we leave, and we might get a small meal of beets. I felt under the dirt, and the beets seem to be about the size of a quarter now. I'll give them ten more days, then pull them and see if they are large enough to fool with. I will weigh them into the harvest total regardless, as the greens and tiny roots will be edible. we don't care much for beet greens, but I have a neighbor who will gladly take them. 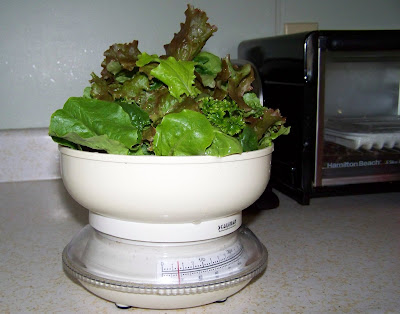