The Sears repairman was supposed to be here between 8 and noon today to fix the water heater. By three this afternoon, I was sitting in a lovely tub full of warm water.....because I boiled four big pots of it on the stove and took them into the bathroom to add to the cold water in the tub! I was feeling so clean and good smelly in that bath when the repairman finally arrived. But now the water heater is temporarily fixed.....the igniter was defective, and he didn't have a replacement in stock, so it will be a week to ten days to have it shipped. The heater was installed new last January, and used less than two months. They sure don't make things like they used to. This time the part was under warranty, so it didn't cost us anything for the replacement. Next time we might not be so lucky.

When I looked out my bedroom window Saturday morning, I was greeted with this lovely surprise. The cacti around my house usually blossom while I'm gone through the summer, so I was excited to see a bud on this cactus when we arrived last week. As beautiful as it is, it blessed us for less than a day. It was gone by noon. 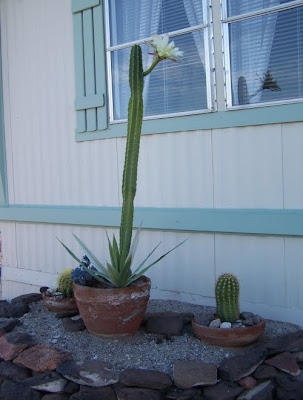 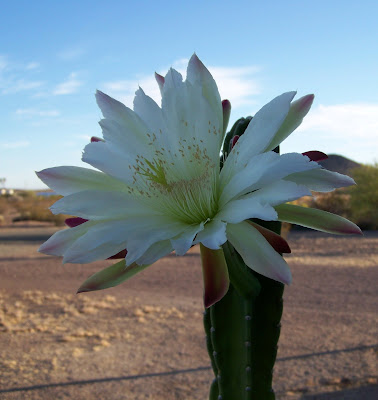 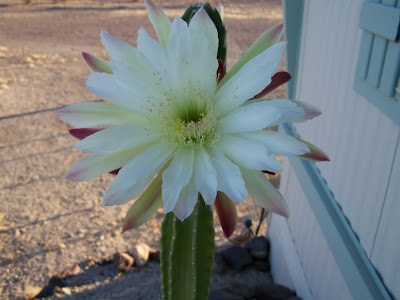 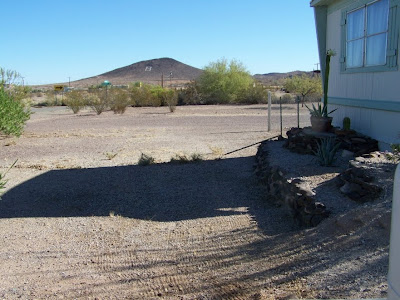 The weeds aren't too bad this year, evidently we didn't get much rain through the summer. I've begun the clean up on lot #1 (shown here), just six more lots to go. Yep......seven lots of nothing....LOL! That area of vegetation is the east boundary of our property, the other six lots are to the south of this one. It's always a bit of a shock to go from the green of Washington to the tan of the desert. 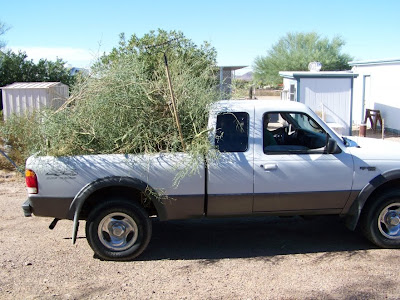 The tree we cut down has been removed to the local landfill.

I'm only getting internet sporadically, so I'm not answering the comments as well as I should be. I hope all of you understand. I've checked out the library, and they didn't have their internet up and running at all, so I have to make do with this occasional connection for now. No work has been done on the WIFI tower in this entire first week we've been here, so I'm not holding my breath it will be finished anytime soon.