After all the complaining I did about the cold, I'm not going to say a word about the heatwave we are experiencing right now. I'm not going to tell you it was 100F yesterday, and Mr. Granny and I had to dig up and replace a broken irrigation line. I don't know how long the PVC had been shattered, but I'd been complaining about the front sprinklers not reaching, and brown spots developing in the yard, for nearly a week. Yesterday morning, I noticed the south end of my garden paths were flooded. Upon further inspection, we discovered a crater at the east side of the house, a spot we never see unless we're mowing back there. Digging out the line, we saw it had absolutely shattered back from the sprinkler by at least four feet. It took two days in this heat to repair. One day to dig it out and replace it, the next day to fill the trench and clean up the mess. But I'm not going to tell you it was too hot to get it all done in one day.

I shouldn't tell you it's supposed to get up to 104F today, so about an hour's work was all I managed in the garden this morning. I won't mention the beans didn't get picked because I was sweating too hard, and I couldn't see the beans with all the sweat running in my eyes. I did pick a few raspberries. Very few. So few, it's not worth picking them any more this year. The raspberry harvest has come to an end for my summer berries. I grabbed the clippers and cut out the old canes on the west side of the bed, where it was cool and shady. I'll do the east side tonight, when that side is cool and shady. 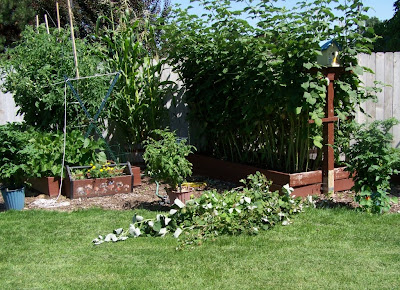 Half of the raspberry bed was cleaned out. More of the large new canes will have to be removed, but they will be dug out and given to DaBeardedOne so he can get a bed of them started for next year.

I shouldn't tell you I cut a red cabbage too far down on the stalk, and missed the opportunity for it to give me four more heads of cabbage. 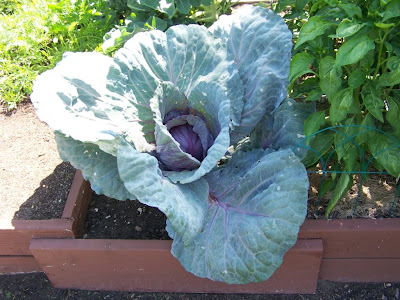 This beauty was ready to cut. I wasn't taking chances it would split if I waited much longer. 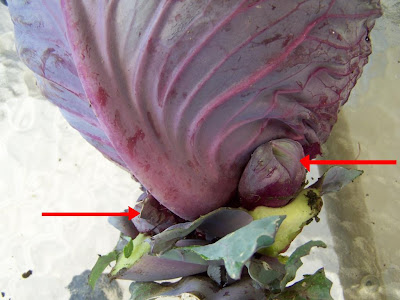 If I had cut it farther up, it would have grown four more small heads of cabbage. The arrows point to two of them, there were two more on the other side.

I shouldn't tell you I already missed a zucchini, which will be made into bread this week. The plant isn't all that large, that I should have missed a big one. It must be the bifocals. 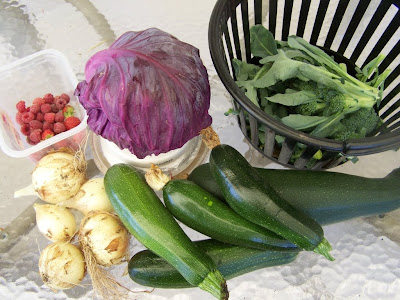 See that big zuke I tried to hide behind the others? Tonight's dinner will consist of barbecued chicken breasts, fried zucchini, steamed broccoli and carrots, red cabbage slaw and the last of the raspberries over vanilla ice cream.

OK, enough of what I shouldn't tell you. I can tell you we had the best garden dinner last night. Unfortunately I didn't take photos of it. I did use, fresh from the garden, carrots, potatoes, onions and cabbage. I also used tomato juice, canned from my 2009 garden. I made a turkey kielbasa stew. I put a bit of oil in the electric fry pan, then added 1" chunks of turkey kielbasa, whole baby new potatoes, quartered sweet onions, 1" chunks of carrots, and 1" chunks of celery. I tossed it around and let it brown a bit, then I poured tomato juice over it, added salt & pepper to taste, covered the pan, then turned the heat down to 325 and just let it simmer away, turning everything occasionally with a large spatula, so as not to break up the potatoes. I had to add a bit of water to it twice, but I let it cook down to gravy consistency toward the end. About ten minutes before it was done, I placed wedges of cabbage over the top, covered it again, and cooked just until the cabbage was tender-crisp. I served it with garlic sour dough bread, and an old fashioned Jell-O salad of orange gelatin with shredded carrot and crushed pineapple. I don't know why we were both so hungry for a Jell-O salad, it must have been the heat! I must say, it really hit the spot. 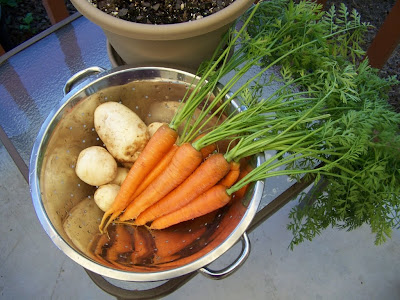 Freshly dug potatoes and carrots, straight from the garden to the pot. 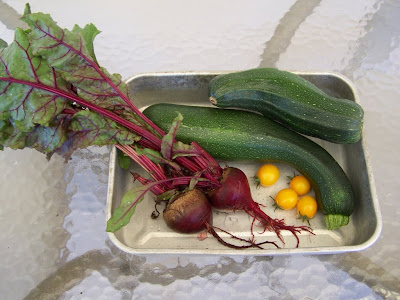 Wednesday night's dinner was equally heavy on the garden produce. We had fried chicken breasts with boiled new potatoes and chicken gravy, Harvard beets, fried zucchini and green beans with bacon and shallots. Our plates were too full to want a salad, but I ate the cherry tomatoes as an after dinner snack.