It's been a busy couple of days here, what with picking and processing tomatoes, picking apples over at Pat's house next door, and making apple butter. If that wasn't enough, I've spent hours in the last two days refreshing WOOT! during their Woot-off, just waiting for their BOC (stands for bag of crap) to appear, and I just happened to go take my fresh loaf of bread out of the bread maker, walk over to refresh the page, and there it was! I actually think I got it (it disappears/sells out in a matter of seconds). The order status thingy is still running in circles, but it's showing the purchase on my account. (Update: I got the email order confirmation! I'm really getting a BOC!)

If you have never experienced a Woot-off, you haven't lived. Normally, WOOT! offers one item a day for sale, but during a woot-off, they clear out their warehouse and sell everything really cheap. As soon as an item is sold, they offer the next one. Sometimes it's just a matter of a few minutes between items, others take a bit longer. Usually a Woot-off only lasts for the day, but this one has been going on for two days and nights. Of course, the main thing is waiting for them to offer the famous BOC. I think this was the first one offered since Amazon.com bought them out, and it was sure a stroke of luck to get it....maybe. It might really be a bag of crap!

If you're curious about what some have received in their BOC, just go on YouTube and search for "WOOT bag of crap". I'd like to be like the lady that got 24 MP3 players (from 2GB to 16GB capacity) and three digital camera bags. Oh, well, whatever I get it was worth the $3 that it cost me (I had a code for free shipping), just for the two days of entertainment and the excitement of "the kill".

Now, back to the matters at hand, cooking and gardening. 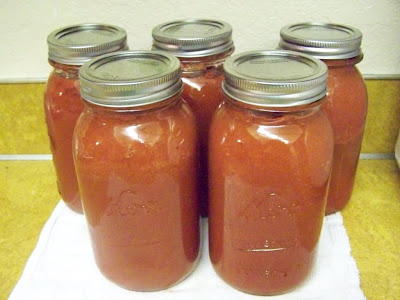 Wednesday I caught up with most of the tomatoes, by making and canning five quarts of tomato juice. Of course, I then went to the garden and picked more. 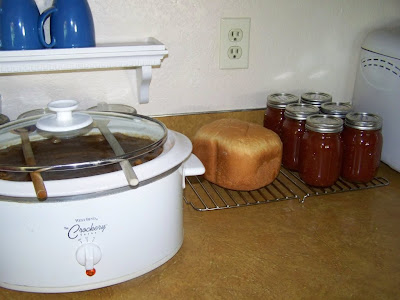 This morning I took a basket over to Pat's yard and picked a bunch of golden delicious apples that were just going to waste. She doesn't spray them, but they're nice apples with a bit of trimming, and very good for applesauce or, in this case, apple butter. I'm doing mine in the crockpot, so I'll probably be up late canning again tonight. Notice the two wooden spoons holding the lid off the crockpot. That's a good way to keep the spatters from going all over the kitchen, while allowing the contents to cook down and thicken. 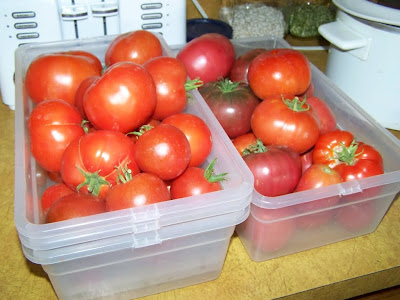 I still have two large containers of tomatoes, not to mention a windowsill full, left from yesterdays picking. 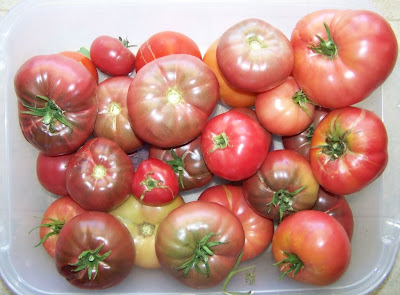 Then I picked more today, from behind the garden shed, but I'm just going to ignore the rest of them until tomorrow morning. I'm trying to convince myself to start a batch of ketchup this afternoon, since I'll be up half the night with the apple butter, anyway.