I've already told about the kennel garden, so for those who do not know the story, you can read about it here. 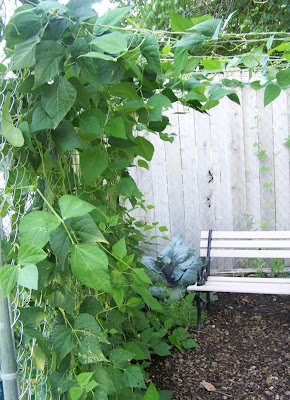 Fortex pole beans climb up the inside of the 6' chain link fencing, than across cotton clothesline rope strung over the top of the kennel. There is a red cabbage in the back left corner, that may or may not get large enough to harvest some day.

Behind the bench there are blue forget-me-nots and several blue morning glory vines that have refused to blossom so far this year. There were a few borage plants there too, but they got a bit unruly and were pulled before they could smother out the other flowers.

To the right (not shown) is a new planting of pole beans, which I'm quite sure will not have time to mature before we get our first frost. It was a second planting, as the first planting disappeared. In front of them was a double row of beets, which grew to about 3" high and then also disappeared. I suspect the quail took them out, as they have been seen coming from that part of the garden. 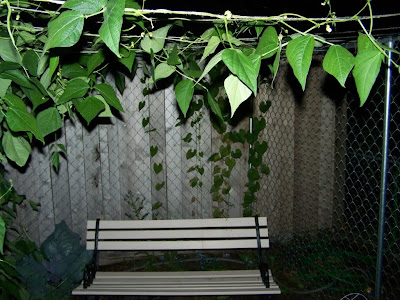 Bean vines are forming a shady arbor overhead, and would be a lovely place to rest my weary bones.....except I get bombarded with falling walnuts from my neighbor's tree. Let me tell you, those suckers hurt when they hit!

The kennel also has a pot of cucumbers climbing its south side, with a few marigolds at its feet, as well as a pot of blue (also un-blooming) morning glories climbing the corner post. 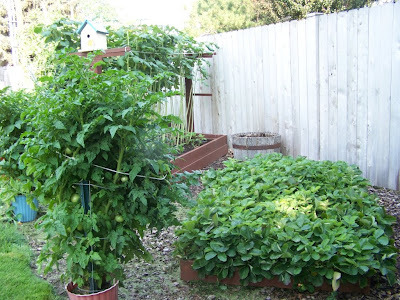 As we leave the kennel garden, and enter the north garden, there is a small bed to the right (not shown) that holds a determinate tomato plant, Dragon Tongue and Royal Burgundy bush beans, and a few marigolds. The next bed, a 4'x8' box, holds the everbearing strawberries which, by the way, are finally giving me some decent harvests. I've picked enough in two days to make a batch of jam! There are two half-barrels here, one on each side of the strawberries, that are empty right now. I'll probably be removing them from the garden, as it's really too crowded when they are filled with plants. To the left of the strawberries is the raspberry bed. There are tomatoes in pots all along the edge of this north garden. 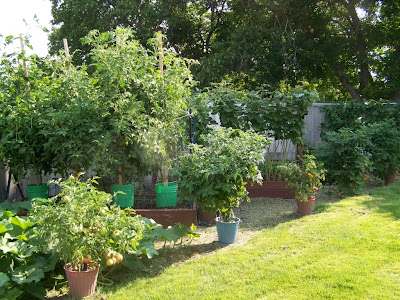 Standing at the center of the north garden and looking east toward the kennel, the potted determinate tomatoes are visible, as well as the indeterminates (in the green buckets). On the back side of the green buckets are carrots and spinach. At the front of the buckets are more carrots, that have just germinated. Between the determinate tomato bed and the raspberries, is another half-barrel planter that I'm also going to remove. 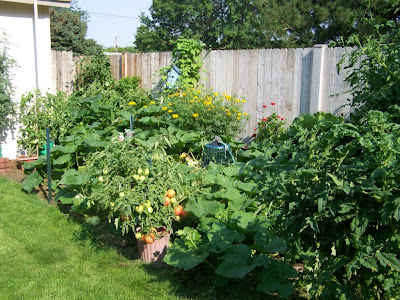 Still standing in the center of the north garden, and looking west toward the shed, we see "the jungle". One hill of two butternut squash plants takes up an area of about 12'x20', and that's after I cut back many of the vines. The last potted tomato, at the edge of the garden, has become my favorite. It's a Clear Pink Early, and it's giving me good sized tomatoes daily on a tiny bush.

In the back along the fence are (right to left) Shasta daisies, hollyhocks that should blossom next year, Sweet Williams, zinnias, marigolds, pansies, blue morning glories (more non-blooming ones) growing on a birdhouse topped ladder, a bird bath, two hills of yellow crookneck squash (volunteers), five indeterminate tomatoes and the compost bin. I cannot walk through this overgrown area of the garden. I have to access the back part of it by going through the shed and out the back door. The only way I can get water to the flowers is by setting the sprinkler up on a laundry basket in the middle of the butternuts! The tomatoes, in the very back, have drip lines for irrigation. 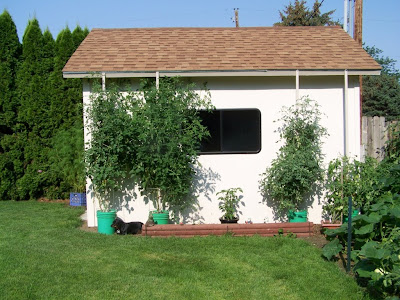 The shed garden has three cherry tomatoes and a Kimberly tomato that was supposed to be an indeterminate, so it got an 8' pole to climb. It maxed out at about three feet. The two on the left have topped their poles and are headed up onto the roof. One lone hot pepper plant sits in the center. All the others were moved to the west garden area for more sunshine and less watering. That's my Annie resting under a tomato plant. 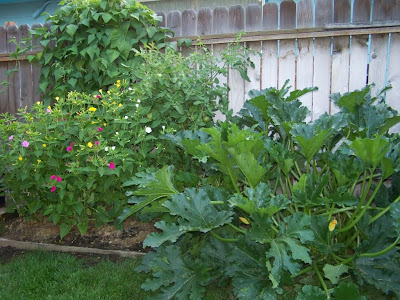 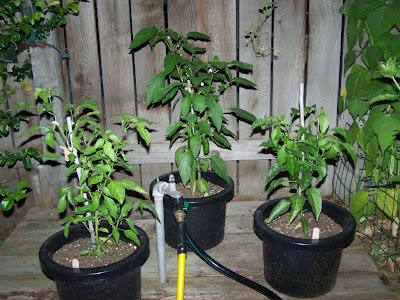 The west garden is where I moved the three jalapeno plants. They were growing sweet peppers by the shed, where they got abundant water, so now they sit atop the irrigation connections where they must be hand watered. I had my youngest son check out a pepper yesterday, and they are now turning hot. So hot he had to drink almost all of the milk I had in the refrigerator to cool down his tongue. 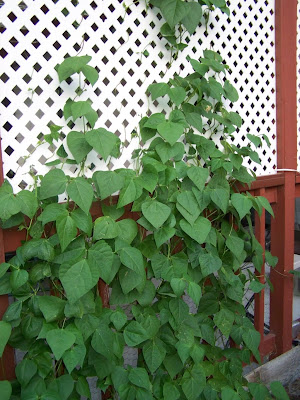 Across from the west garden, at the west end of the patio, are the Trail of Tears beans. Some of the vines have begun to grow to the top of the lattice, and onto the patio roof. 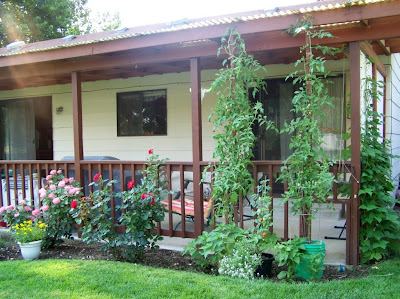 Around the corner from the Trail of Tears beans, we come to a Black Cherry and an Amish Paste tomato growing up to the roof. In front of them is a Husky Red Cherry tomato. Four O'Clocks, alyssum, roses, thyme and chives can be found in this bed. 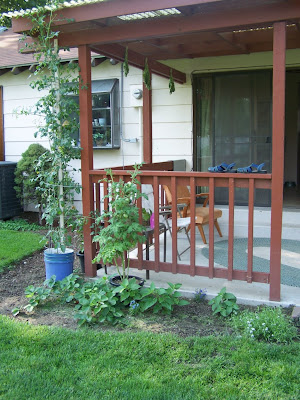 On the other side of the patio, I have another dwarf tomato, a Cherry Roma growing up over the roof (I'll need a ladder to pick all the cherry tomatoes), a few strawberry plants that I'm letting run to eventually become a ground cover, some alyssum and a pot of Hungarian Wax peppers.