To all who commented on the size of the Quadrato Rosso D'Asti peppers in yesterday's post, I do nothing special for the huge peppers. They are planted in my regular garden soil, which has a couple of inches of compost (dairy compost from the nursery) dug into it each spring, and a sprinkling of 10-10-10 (any brand I can find, this year it's Lily Miller Ultra Green All Purpose 10-10-10) worked in just before I plant the husky, healthy, home grown plants. These were from two year old seed, purchased from Ohio Heirloom Seeds. I highly recommend them. I mulched the plants with a couple of inches of dried grass clippings, staked each of them, and kept them well watered. That's all.

The variety is exceptionally large, but my Golden Calwonders, also from two year old seeds from Ohio Heirloom Seeds, size up quite nicely, too.

This year has actually been a disappointment when it comes to the peppers. Last year I planted fewer plants, and the yield was much greater than what I'll get this year. In 2009, I had a dozen plants, eight Quadrato Rosso D'Asti and four Golden Calwonder, and I harvested an amazing 87 pounds from them! That's an average of 7-1/4 pounds per plant! This year I set out 16 plants, and have only harvested 23 pounds so far. Of course, there are a lot that haven't yet been picked as they are a bit late (by more than a full month) to color up. Also, many were removed from the plants earlier in the season when they were very small, due to the disease problem they were having. 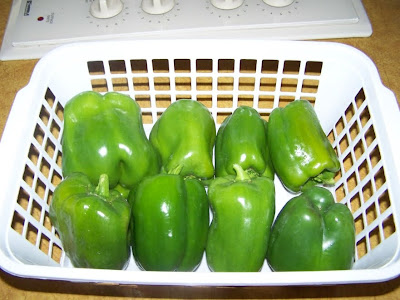 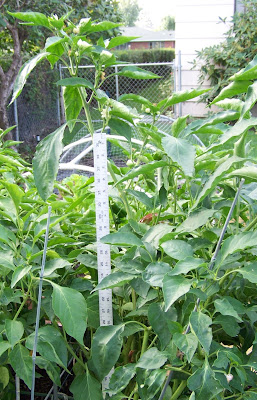 The pepper plants grow very tall, these measuring about 47" when they are standing straight up. Even though I have these staked, they have grown so tall and heavy with fruit that they are leaning badly. The small bamboo stakes are just no match for the weight of the plants. A few branches have broken off already, overloaded with immature fruits. Next year I might try cone shaped tomato cages. 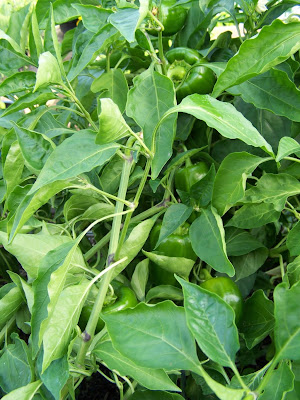 Look closely, and you'll see how the plants are loaded with young peppers. In a normal year, these would have ripened to a bright red by now, and the plant would be full of younger green peppers. 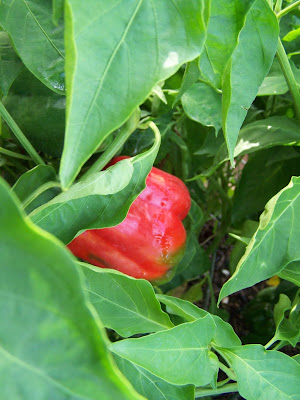 Here is one I missed yesterday. 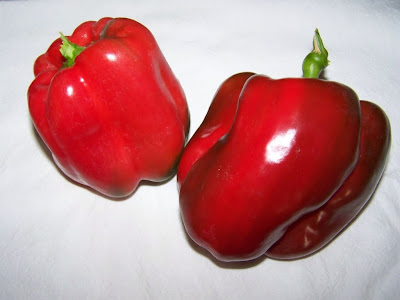 It turned out to be "only" nine ounces, a mere baby compared to the 13 ounce giant from yesterday.