My, the season has gone by too quickly! The garden has slowed considerably, and there is now more clean up work being done than there is harvesting. 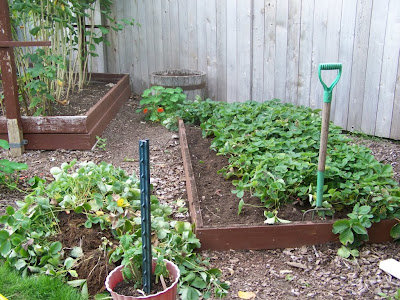 After a disappointing season for the strawberries, I'm now in the process of removing all but the center row of plants, so they can put out new runners next spring. I expected the plants to do well in their second year, but most of my berries came from this year's runners. I've not made up my mind about it yet, but I might eliminate the 4'x8' strawberry bed and just plant a few in the three whiskey barrels by the fence. If I do that, I'll most likely use this bed for more raspberries. We didn't have nearly enough raspberries this year, and I'm wishing I'd bought Heritage rather than the one crop Canby (although they were very good). 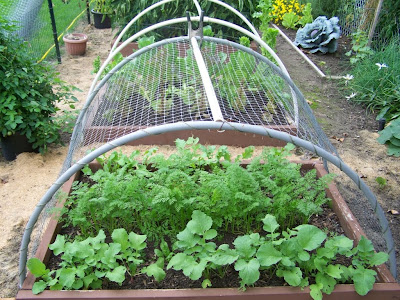 The radishes in this bed are showing big, healthy tops. Unfortunately, the roots are almost non existent. The carrots in the center are doing much better, and may actually give us some baby carrots by the time we're ready to head south. If not, I'll leave them and hope they over winter. There are a few spinach plants scattered through this bed, but they came up very spotty, and aren't growing very quickly. The next bed has the summer sowed lettuce, most of which has now begun bolting. Would it have bolted sooner without the lattice covering I erected? I don't know. Last summer was hotter, and the lettuce never did bolt under the lattice. However, the seeds were scattered thickly over the entire surface, and it was treated as a cut-and-come-again bed. This year I did individual seedlings, spaced for larger growth. I'm going to leave it to do its thing, and hope it will give me some early spring volunteers. There are just a few plants of which the leaves can still be harvested for the rabbit. 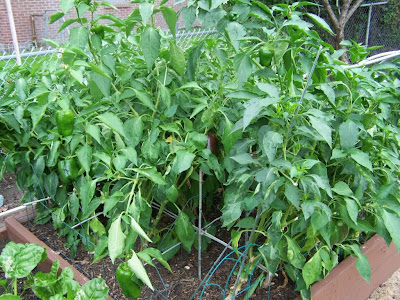 The sweet peppers are coloring up very slowly this year. It looks as though I'll end up harvesting most of them green. The plants are heavy with fruits, to the point of beginning to break down the stems. My staking system just wasn't strong enough for them this year. 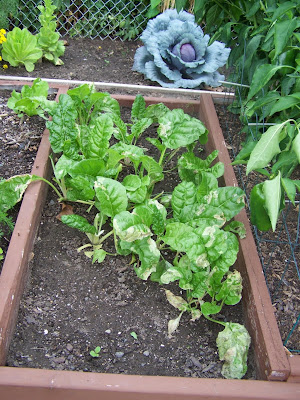 Leaf miners are ruining the chard. I'm getting a few usable leaves for the rabbit, but most days the crop looks like this, so the leaves have to be picked and thrown in the garbage. I think I'd better harvest my beautiful red cabbage this week. I don't want to press my luck and have it split. 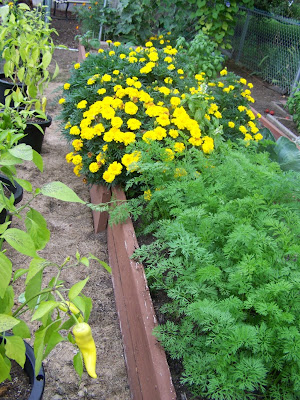 This is the only pretty section of garden left now, filled with carrots, marigolds, basil and parsley. The carrots look like they are almost ready to harvest. The pots of hot peppers along the fence aren't looking terribly healthy, but I've withheld the fertilizer, hoping they would develop more heat. They'll all have to be picked in the next two weeks, as we could have a frost soon after that. 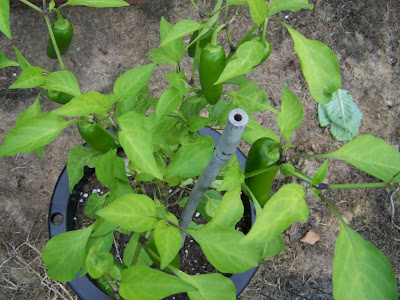 There aren't nearly as many peppers on the plants this year. Last year they were absolutely loaded and the plants were twice as large, but they had no heat at all. 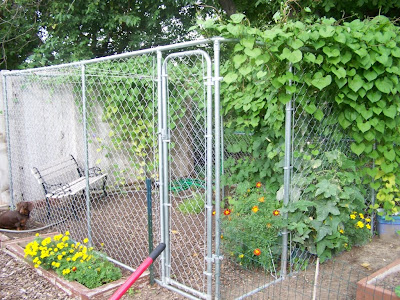 The Fortex beans have been removed from the dog kennel fence, and are drying on the patio. I've had very few dry pods from them, and we had rain this week, so I decided to try drying them on a screen. I do hope I get some viable seed that way, but I'm not holding my breath. I may end up with the dozen or so that came from naturally dried pods. There are some pole beans on the right side of the enclosure, but they are so entangled in morning glory, it's rather difficult to find them! The morning glory is giving us 10-12 flowers each day, from the two plantings. The ones along the back of the kennel were the last ones planted, and the first to blossom. The ones growing from a pot at the right front have lush foliage, but not quite as many blossoms, although the flowers themselves are larger. I must get a morning shot of them, when the blossoms are open. They certainly aren't giving the brilliant show of color that they did last year, and they are a full two months behind last years blooms. The cucumber at the right of the opening is still pumping out a half dozen or more per week, and doesn't seem to mind having its head buried in morning glory vines. 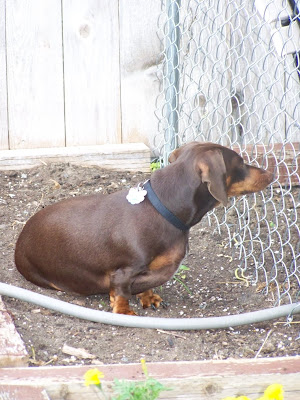 I wonder what Otto is thinking. And why is he wearing his collar upside down? 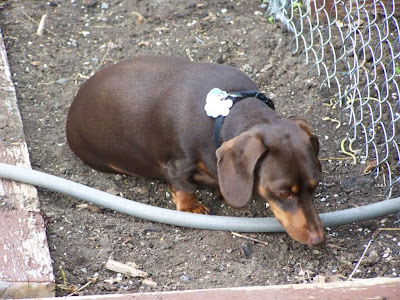 He's probably looking for worms to play with. 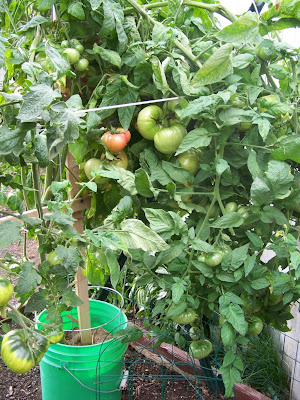 The Brandywines aren't ready to give up yet. They are now our main source for slicing tomatoes, and we're getting more than we can eat from just this one plant. It had grown over the fence, so I pulled it back onto my side and discovered it was absolutely loaded with large green tomatoes that nearly went to the neighbors! I wouldn't have cared if these weren't the same neighbors who managed to soak me with their sprinkler about once a week through the summer. The same neighbors who took all the wood from our downed maple tree for their wood stove, and never even said thank you. The same neighbors who have a huge garden on the other side of that fence, and let it all go to weeds. Pffft....let 'em grow their own Brandywines! 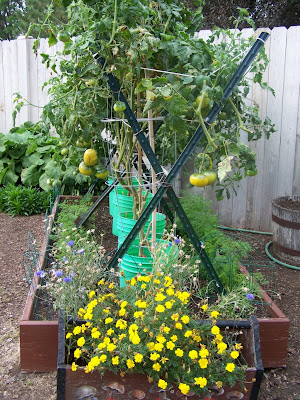 Kellogg's Breakfast is also giving us quite a few tomatoes, but I'm disappointed in their flavor and texture this year. This plant was grown from self saved seeds, and I'm wondering if it may have crossed with another variety. The skins are really tough, where last year they were so thin skinned they had to be eaten right away, or they would get soft and mushy. The flavor isn't as good as last year either, but I didn't think any of the tomatoes were as flavorful this year. Only two tomato plants remain in this bed, the other two were removed to give these more room. Last year I had seven plants there, this year I had four. Next year there will be three at the most! The carrots that were planted on both sides of the tomato buckets are growing well. Those on the right just might get large enough to eat in the next three weeks, but I think the ones on the left were planted too late. 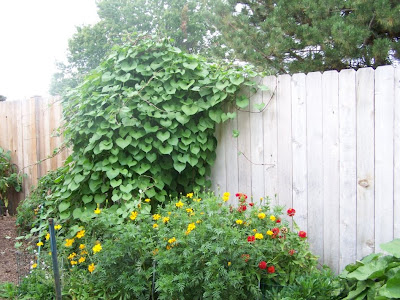 The morning glories on the fence were the first ones planted, and have yet to give me a single blossom. There's a ladder and a bird house under there somewhere! I've noticed a lot of bees in this area of the garden this week. The zinnias have grown too tall, and are falling over. I'll grow them again next year, but provide them with some wire fencing for support. I was sure I planted the dwarf marigolds here, but it turned out to be those humongous things I swore I'd never plant again. I did cut them back a month or so ago, so they are kind of under control now. 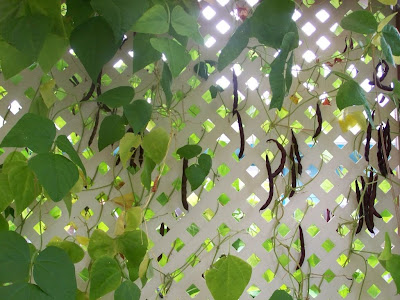 The Cherokee Trail of Tears beans are slowly but surely drying on the patio trellis. I've probably shelled about a cup so far, but these are still a week or two from being dry enough. I need to get them out soon, as I have a honeysuckle vine rooting and ready to plant in their place. 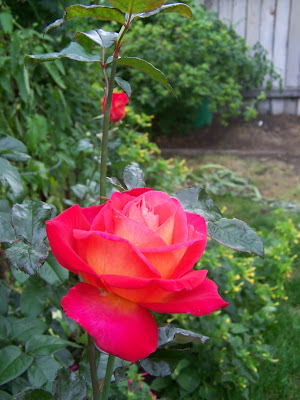 One of the last roses of summer. It smells like fresh raspberries.