The mid-April garden is quite a bit behind last year's. Our weather has been consistently about ten degrees below the normal temperatures for this time of year. Nothing has been harvested yet, with the exception of chives, which are abundant. 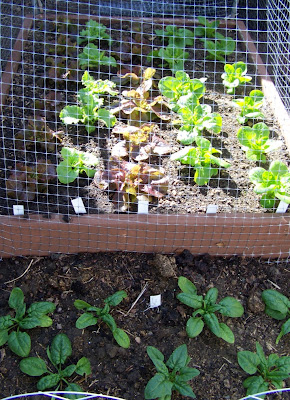 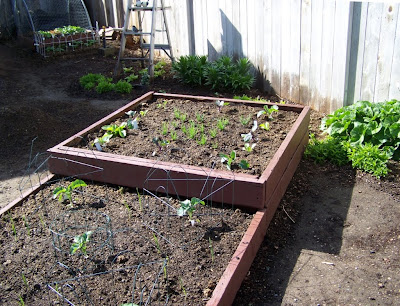 Cabbages, lettuce and shallots (back box), broccoli and garlic (front box). It looks like all the garlic and shallots are growing well. My mystery: I lost several lettuce plants, all one variety, Parris Island Cos. In the same area of the back bed, one of the cabbage plants has failed to show the growth that all the others have. 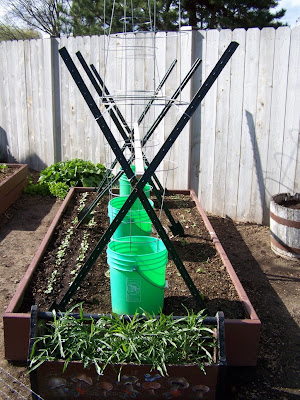 The future indeterminate tomato bed. Please notice that the horizontal board, which is part of the tomato support structure, has been set level. The planter in the foreground is also now level. The last time I showed a picture of this bed, both were way off kilter! There are two rows of radishes on the left side of the buckets, spinach and turnips on the right, and lettuce in the center. The planter is filled with bachelor buttons. The whiskey barrel to the right was just seeded with a lettuce mix yesterday. 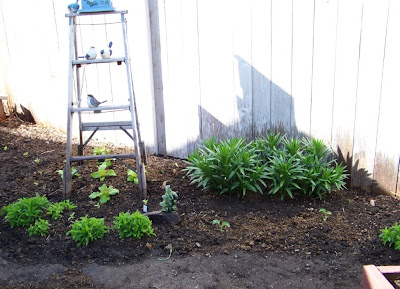 The flowers along the fence include Sweet Williams, both tall and dwarf cosmos, lilies, dwarf zinnias, and two leftover broccoli plants right at the front. There is iceberg lettuce under the ladder. Not visible in this photo (off to the right) are hollyhocks, cone flowers and Shasta daisies. 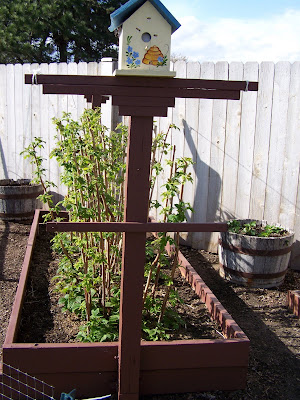 The raspberries are way behind last year's growth. 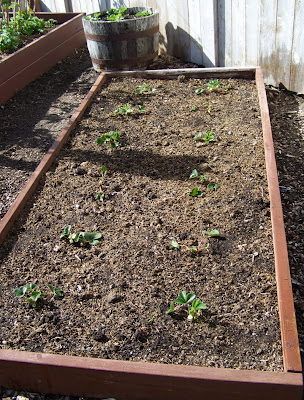 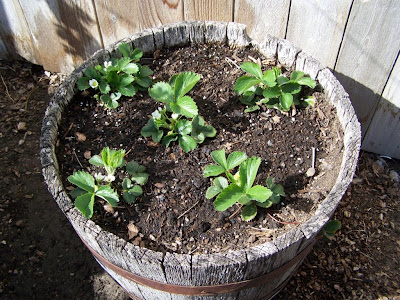 I'm glad I moved a few of the strawberry plants to two of the whiskey barrels! 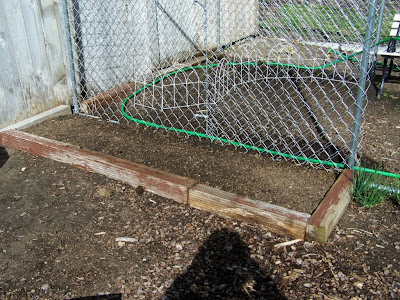 If our night time temperatures ever get out of the thirties, I'll be planting my Fortex pole beans on both sides of this fencing, with carrots in the front. On the other side of the fence, in the kennel, are radishes, lettuce and mesclun. The morning glories are planted at the back corner, and some nasturtiums seeds have been scattered here and there and may or may not survive if it gets too shady. I see a lot of volunteer sweet alyssum, which will be allowed to grow. Not shown, to the right, is where the Chinese Red Noodle beans will be planted, with more lettuce plants in front of them. There is unprotected lettuce all around the garden, and evidence the birds have been enjoying it.


The East Garden
I bought a bale of straw today, and began spreading it on the paths of the east garden. Not for weed control, which isn't really much of a problem in my garden, but for mud control. I'm so tired of cleaning mud and dirt off of my floors, where I track it in every single day! I got half of a bale spread today....in the wind. It looks a bit messy right now, but it should pack down and look neater before long. It looks like I'll need at least one more bale to finish both garden areas and the kennel, but it's very reasonably priced at out local feed store, at $4.99 a bale. 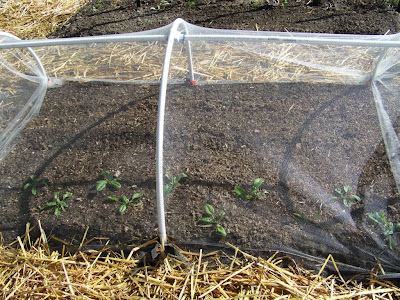 Spinach, both plants and seeds, are in this bed. There are also turnips, beets and Swiss chard seeded here, as well as parsley plants.

Not shown, the next two beds which are not yet planted, except for a few leftover lettuce plants. 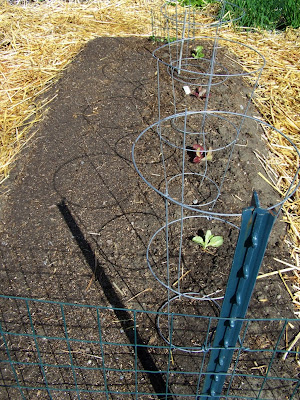 This bed, which is one of two that will be planted with sweet peppers, has a foot-wide intensive planting of carrots all along the left side, and more of the lettuce plants along the right side. 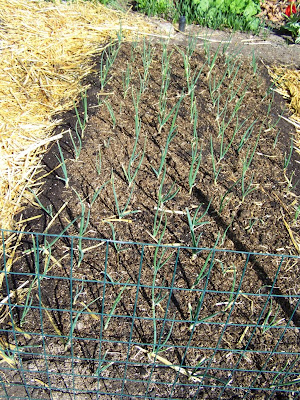 The Walla walla sweet onions are growing, but slowly. They are much, much smaller than last year's April onions. 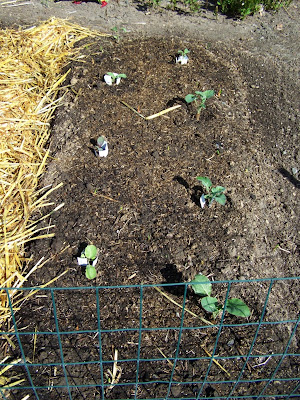 Cabbage (left) and broccoli (right) interplanted with yellow storage onions. The onions are peeking through the soil, just not visible in this photo.

There is one more bed at the end, planted with sugar snap peas that have yet to germinate.