We decided we needed a rhubarb plant. I haven't had one since we moved from our previous house, nearly 22 years ago. I'd like you to meet...... 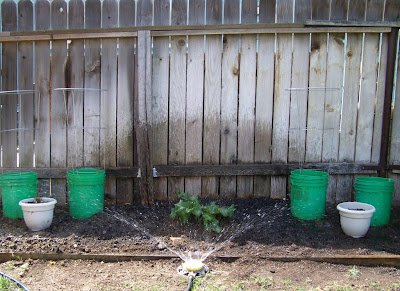 It's supposed to be a very hardy variety, with stalks that are red all the way through.

Not much got done in the garden today. I had a sick dog last night, so my bedroom carpet got shampooed this morning. Otto has such a weak stomach, he cannot stand it if I change the food I give him. He usually has chicken, green beans and a bit of dry kibble. Yesterday I had some sirloin steak trimmings from a pot of home made soup, so I gave him that with a few mixed veggies instead. I don't know how I managed to sleep through all the puking that was going on in the bedroom, but it was a rude awakening when I climbed out of bed!

I did get a half dozen bottomless tomato buckets set up this afternoon. I ended up with four in the garden above, where I had planned on three. Since I decided this would be the best spot for the rhubarb, I had to even things out with two buckets on each side. I don't expect the end tomato plant on the right to do much though, other than hide the neighbor's ugly fence. I hope if that fence falls down, it doesn't land on my rhubarb! 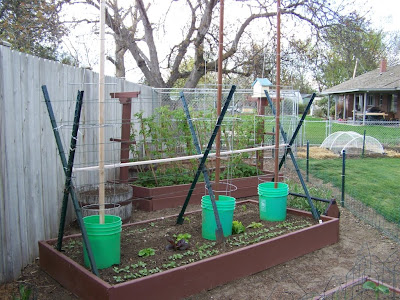 This is the "tomato fortress" I finished yesterday. The 8' support poles were screwed into the crossbar to hold them upright. 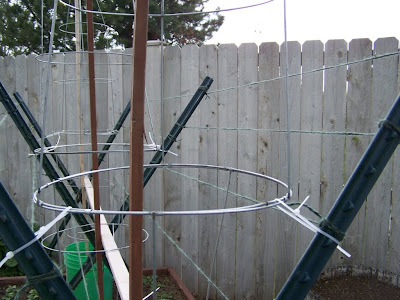 Everything was screwed down, zipped up, clamped and/or tied off. It's so sturdy, I can grab those cages with both hands and shake them, and they won't budge a bit!