I like things lined up neatly in a row. I want everything in my world to be plumb and even, and properly spaced. I walk around with a level and a yardstick in my hand when I'm putting up any garden structures or planting rows of veggies. That is, if I have a spare hand.

So how did this happen? 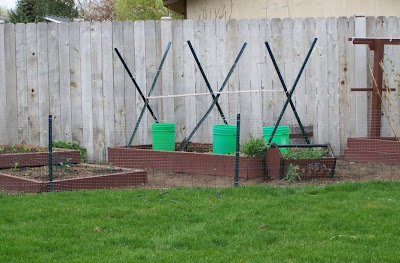 My first 8-foot 1x2 didn't quite make the span from one end to the other, so I drilled a hole in each end and fastened them to the cross bars with cable ties. I couldn't hold everything in place while zipping the ties, and this is what I ended up with. I know it's not going to show once the tomatoes grow that tall, but in the meantime it's driving me crazy. You know I'll have to go out there, cut the ties and make an adjustment, don't you? And while I'm out there, I'll have to find something to prop up one side of that planter....the one that is listing to the left. I also will not rest easy until the raspberry trellis posts are set straight, although I'm not yet sure what I'll do about them. They can't be buried, due to the old tree roots underneath. They are already strapped and screwed to the bed, but that just makes the entire bed move when the wind blows. I think my only remedy might be either (a) pound a T-post into each corner and lash the trellis crossbars to them or (b) install large screw eyes to the bottom of the bed boards at each corner, then run guy wires from the post to the screw eyes.
Our irrigation water came on last week, earlier than usual. I gave the entire garden a good sprinkling. Good thing I did, as the water went back off yesterday, just as everything was drying out again and new seeds had been planted. It wasn't exactly off, but was running at just a trickle, so I ended up spending about an hour out there this morning, giving all the new plants and seeds a good drink from the hose. Then, just as I'd finished, it started raining. 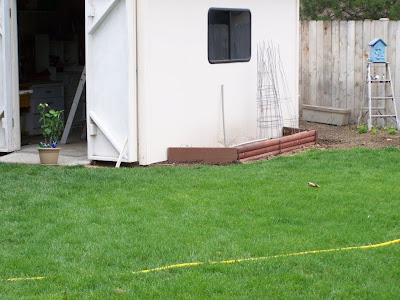 While it was still just a light drizzle, I took two of the 2"x12" boards that had been saved from the west garden destruction, and (with level in hand this time) installed them at the ends of the small shed garden. I had planned on buying more cherry timbers to finish that off, but it never happened. I think this will work just fine, and after everything gets a coat of matching paint it should look OK. This is my "pot garden", where I put pots of stuff, like flowers or herbs or peppers. A tomato plant will go on each end, outside of the bed. Leona the Meyer Lemon tree (in front of the open shed doors) is spending her days outside now, and her nights inside the shed. When the night temperatures stay up around 50F, I'll be leaving her outside, probably in the pot garden, under the window.