The sparrows have taken over the garden, so Mr. Granny and I headed out toward the raspberries armed with bird netting. As we neared the garden gate, I noticed movement inside the netting covered hoops that protect my beets, spinach and chard from the flies that cause leaf miner damage. The movements immediately became frantic, as the two young birds, who had somehow managed to get under the netting, saw us approaching. I went on through the gate, and lifted the clamp off to open one side, and one bird escaped right away. The other bird, however, went to the other side of the enclosure, and Annie, who had followed me though the gate, pounced. She missed the bird, and I was able to shoo it to the other side and safety, but the hoop netting could not withstand being pounced upon by a 30-pound dachshund. I have no idea what kind of birds they were, definitely not sparrows. I think they were probably young starlings or cowbirds. 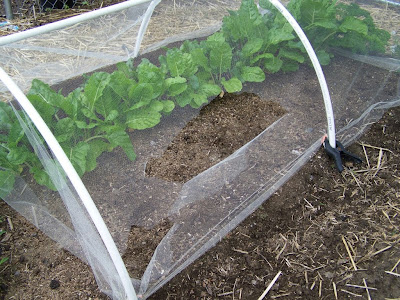 Something tells me it's not going to offer much protection now.