Before I begin my whining and crying over the lousy gardening year, I want to wish our granddaughter, Alicia, a happy 17th. birthday. I can't believe how quickly she is growing up! No matter how old she gets, she'll always be our "baby". She was the one grandchild that spent a lot of time with us when she was small, as both of her parents worked. If anyone wants a little taste of what it was like to have her around, I kept a journal of some of the funnier things that happened with a little one in our midst....A Year (and More) in the Life of Alicia.

Now, on the the lousy July garden.

One would think the garden would do well. Maybe better than ever, what with the mild summer we've had so far. Yes, the spring was cold, cold, cold.....many of the seeds rotted, many of the seedlings froze, but there was still plenty of time to plant once the temperatures came up to optimum. Alas, even with a bit of warmth, much of the garden did not flourish. Yes, the onions did great, the lettuce did great, and surprisingly, the bush beans are doing great. That's about it. The early planted carrots are ugly, hairy, stubby warty little things. The later planted carrots look like they will be beauties, though. I've only pulled one to check, and it was long and straight and sweet.

A year ago, I was harvesting big bowls of big, beautiful strawberries. This week I got enough small, deformed berries for two small shortcakes.

Last year I was picking baskets full of tomatoes nearly every day. This year, if it weren't for the bloody Butchers that have given me a dozen or so small salad tomatoes, I wouldn't have any to harvest at all. This year I only planted three Brandywines, as they have always been heavy croppers for me in the past. So far only one has set any fruit at all, the other two have just dropped their blossoms. Even the plants themselves are stunted, compared to previous years. They should be ten feet tall by now, and they are barely half that. In fact, it's the smallest, sickliest plant that is bearing the fruit. My in-ground planted Rutgers tomatoes began to show some disease, and one has been so heavily pruned of diseased leaves it may not survive. The other two don't look too bad after removing the bottom leaves, but like the Brandywines, only the sickly one has fruited. Luckily, all the other tomato plants are looking healthy, and the Cherokee Purples should be ripening soon. 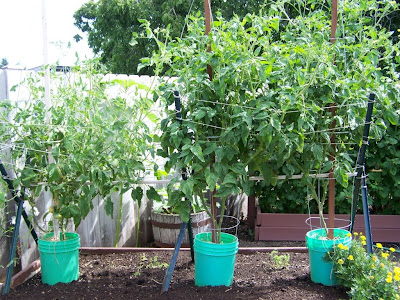 The healthiest looking Brandywines have not set a single tomato. The small one on the left has fruited, even given two ripe but very small (4 ounce) tomatoes. Last year the Brandywines were over ten feet tall and loaded by the end of July. 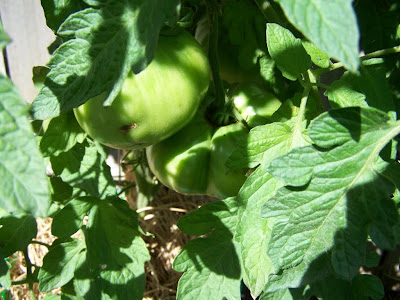 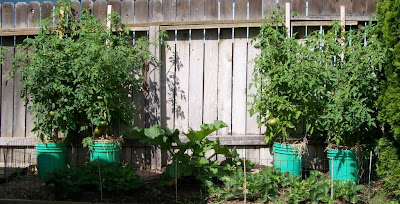 The Cherokee Purple plants are sturdy and healthy. 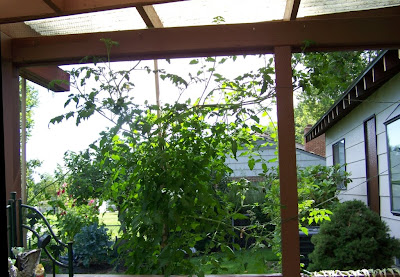 Matt's Wild Cherry is taking over the entire east side of the patio. I've strung twine to try to train some of the vine horizontally, so that I can reach the tomatoes. I've had a handful of tiny fruits from this plant. Are Matt's WC supposed to be so tiny? These are about the size of a pea!
Last year I was picking bell peppers nearly every day. This year they are just finally beginning to blossom. A few haven't even reached that stage. 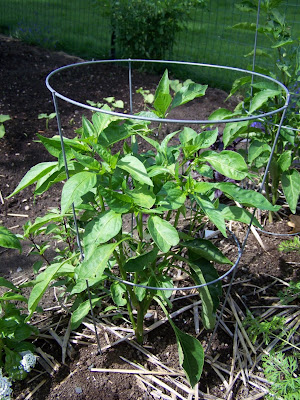 The warmer weather has been beneficial to the peppers. They are finally growing and blossoming. 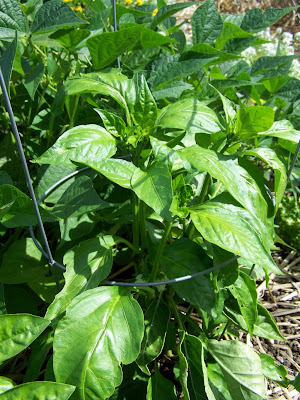 Even the ones I thought were goners have begun to bush out and blossom.

A year ago I was picking so many zucchini and yellow crookneck squash I had to give a lot of it away. This year....not even a blossom yet. 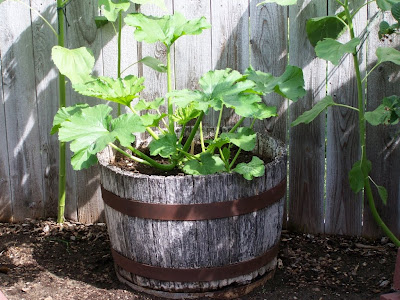 The zucchini has yet to blossom, the yellow crookneck squash plants are smaller yet.

Last year I was making refrigerator pickles from all the cucumbers I brought in. This year....one plant has blossoms, none of the picklers have even begun to climb the fence. 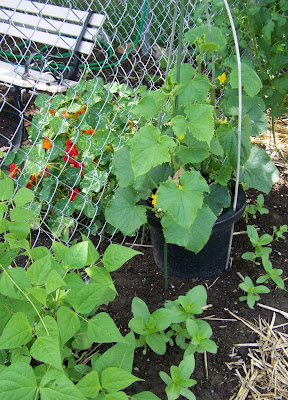 The bush slicing cucumber has blossoms, and one tiny deformed cucumber so far. 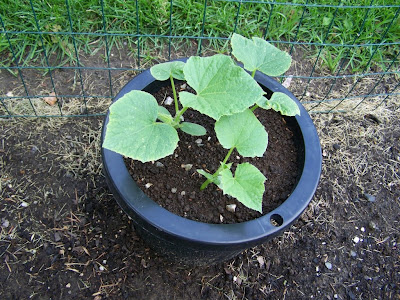 The pickling cucumbers are way behind, and haven't even attached themselves to the fence yet.
Last year the Fortex pole beans were the stars of the bean world. This year, although the bush beans have performed well, the Fortex are just putting forth three or four beans at a time. 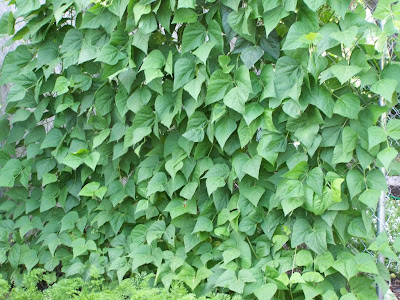 Fortex pole beans looking healthy, but not yet producing much.
Last year I was digging lovely new potatoes. It's my fault I don't have any this year. If you don't plant potatoes, you can't harvest potatoes. Who knew? LOL

OK, I'm finished with my whining.

Yesterday I had grandson Kevin help me bucket some composted manure into the cleaned out brassica bed, so it's now ready to plant for fall. I'll be planting it right away with beets, then with spinach in a couple of weeks. I have some lettuce seedlings that are getting really leggy on the windowsill, so I'll likely set them in that bed this evening. It's supposed to turn hot for a few days, before dropping back down into the eighties, so I'm not going to hold my breath that they will even survive the transplanting. I have to immediately get the cover over that bed once the lettuce is in, as the sparrows have voracious appetites for young greens again. 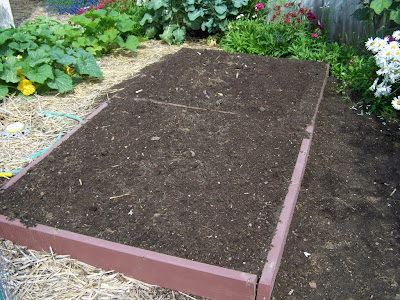 The former brassica bed, amended with compost and ready for installing hoops. Fall crops will be planted here.
The raspberries are all but finished now. A small handful once in a while, just enough to nibble on in the garden, but not enough to bother bringing in to weigh. I'll be working on removing the spent canes in the next few days. Or weeks. I guess there is no real hurry, other than wanting the bed cleaned out so it looks neater. 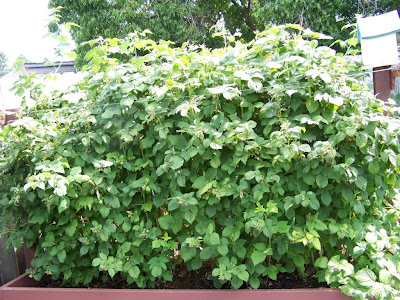 The raspberries are ready for their summer pruning out of all of this year's fruit bearing canes.

The summer lettuce bed is performing beyond my expectations. I'm harvesting big, lovely outer leaves for our salads now, and it's growing faster than we can eat it. I noticed the leaves at the edges of the bed have been nibbled by the sparrows, back as far as their little beaks will reach through the openings in the netting. New plants wouldn't have a chance if not covered.

I've pulled the Royal Burgundy bush beans and replanted with Gourmet Green Baby Filet bush beans. The Royal Burgundy, while really good flavored, weren't giving me much of a crop for the space they took. The Gourmet Green Baby Filets are real bean machines! I can't believe how many beans I get from those plants. Unlike some of the other bush beans, these bear over quite a long period. I've been bringing in big bowls full nearly every day, and there are still medium and small beans, as well as a lot of blossoms on the plants. I actually picked 49 beans from one plant in one picking! The beans are small, but the sheer amount of them makes up for their size. I have but one complaint. They squeak when I eat them. I cannot eat squeaky beans, but Mr. Granny and the dogs don't mind them at all. I've actually frozen so many bush beans I'm out of room in the freezer now. I think we're going to look at buying another small freezer today.

I also planted more Topcrop bush beans where the beets came out last week. I think I have quite enough beans planted now.

About the only other thing happening in the garden is that the winter squash plants are finally beginning to blossom. Only males so far, so I hope it's not too late to get a crop from them. This is my first year for bush butternut, I've always had great luck with the vining type. 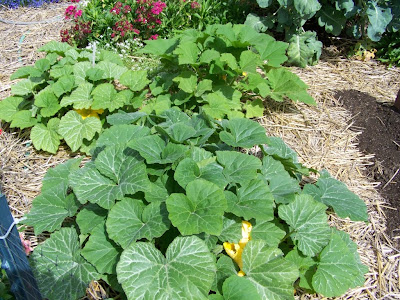 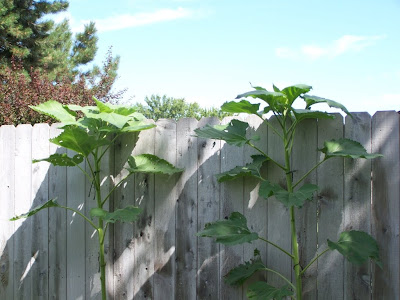 Sunflowers should be blooming soon.

I was very happy with the spring planted shallots. They were every bit as large as those usually planted in October. I have another large bunch of them drying in the shed. They are smaller, and will be used as seed for next year.