Nothing. Well, almost nothing. The hot weather finally arrived, though not miserably hot like some of you have been experiencing. Just hot enough to keep me out of the garden except for mornings and evenings.

There is a lot to be done to prepare for fall.

Fall.....it doesn't seem possible that it's nearing the end of planting season, as we had no spring and such a cool summer. I have done some fall planting, a row of Ruby Queen beets and a row of Little Gem lettuce where some of the early bush beans had been pulled. I'm just taking a chance the birds will leave the lettuce alone, as it's in an unprotected bed next to the peppers. Yesterday I pulled a large broccoli. It was producing a few small side shoots, but not enough to earn a space in the garden. I amended the soil with compost, and planted some Tyee spinach. There are still two heads of cabbage in that bed, small and full of holes from slugs. I'll leave them for a bit, just to see if they are ever going to amount to anything. I don't really need that space now, I'm probably through planting anything but lettuce and radishes. Those can be tucked in wherever there is an open spot.

The tomatoes are a real bust so far. I'm getting just enough for us to eat, but not enough to preserve. There are some nice Cherokee Purples coming on, but the Brandywines are disappointing, and the only one that's bearing tomatoes looks diseased. One of the three Rutgers has been pruned down to two small branches, I might as well just give up and remove it. All the other plants look healthy, except for one of the two Coastal Pride Orange, which has wilted down terribly. I think the pot it's in is just too small for it. The other one, in a larger pot, is looking fine.

I have two cherry tomato plants that are unknown as far as variety. They came from a packet of mixed seeds, so the only way I can possibly identify them is from the website where they were purchased. The larger plant I'm guessing is Una Heartstock, a large plum shaped cherry. Whatever it is, the two tomatoes I've picked so far were delicious. I will definitely be saving seeds from this one for 2012. 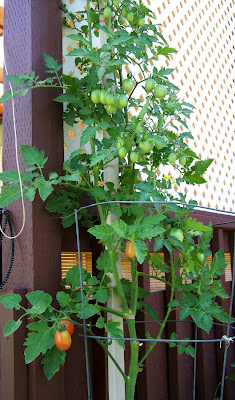 Una Heartstock? It's loaded with large (for cherry) green tomatoes, and has grown up past the roof line of the patio! I'll need a ladder to pick these.

The other unidentified cherry tomato from the same mixed seed packet has much smaller, but plum/grape shaped fruits. It is just beginning to ripen, but I can't yet tell if it's going to be green, yellow or red. Green Grape is the only other cherry listed that looks anything like what is growing, so I guess I should test the one tomato that is beginning to show a yellow color. 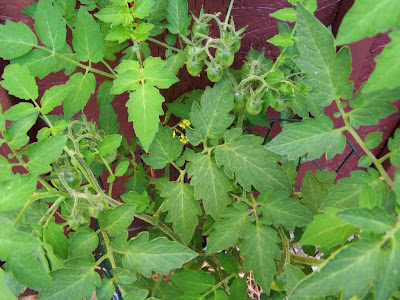 Green Grape? It's also loaded with small fruits.
I've had two ripe cherry tomatoes from The Little Sungold That Could, the plant that had no chance for survival! It is alive and well and bearing fruits. So far, I can't tell the difference between it and the Sunsugar. Maybe later fruits will taste sweeter. 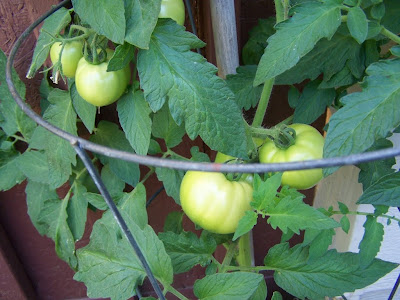 Thank you to Mr. H. for sending me the Bloody Butcher seeds. At least we have some tomatoes to eat each day, and the flavor is much improved now that the weather has warmed. I'll definitely find room in next year's garden for them.

For the next few days the garden will be rather messy. I have flowers that need to be deadheaded or cut way back and spent raspberry canes to prune to the ground. It needs to be done soon, but my get up and go got up and went. I keep saying "Maybe tomorrow".