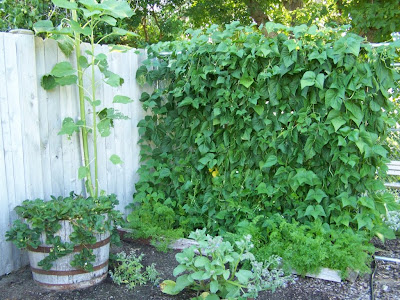 The west side of the kennel is covered with Fortex pole beans. These are my favorites of all the beans, and I've decided to plant them on all sides of the kennel next year. It's probably too shady at the back, but I'm going to give it a try anyway, I might get lucky. There is a small bed of carrots at the front of the beans, but they aren't growing long and pretty as they should. They're short and stubby like the early carrots. Maybe the seeds were old, but I've not had the greatest luck with the carrots this year. The soil is nice and soft and deep, there's no fresh manure in the beds, and no high nitrogen fertilizers were applied. The barrel was planted with strawberries this spring, and they are not performing as well as those in the bed. The borage in the foreground is a volunteer from 2009. I didn't even let any grow last year, but the seed has stayed viable in the ground. One volunteer stayed small, but the other has grown normally. Those are sunflowers in the background, more on them later. 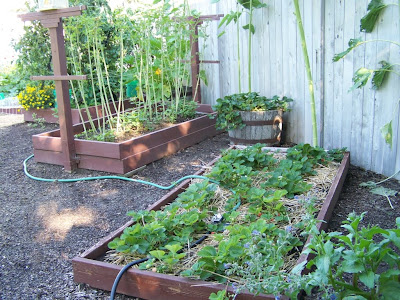 The strawberry bed looks as though it needs a good feeding, so I really need to haul out that stinky fish emulsion......yuk. The berries haven't been performing fantastically this year, especially those in the barrels, but the yields have been acceptable. We've had all the strawberry shortcakes our bellies could handle, and 16 half-pints of jam were made. I have maybe three bags of sugared berries in the freezer, and would like a few more for winter desserts. Some whole unsweetened berries would be nice for future smoothies, too. This variety bears almost constantly until frost, but most of the berries are quite small. Just as I begin harvesting larger berries, the production slows down and the blossoming begins again. The raspberry canes that were left after the big summer pruning and thinning are looking really strong and healthy. They should provide a good crop next summer. 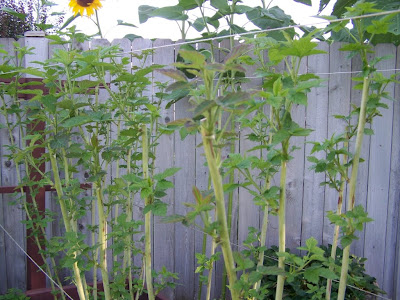 The raspberry canes are sporting new growth. I'll let them grow now, but the tips will probably suffer from winter damage, so they will be pruned back again in early spring. That's the neighbor's sunflower peeking over the fence. I get to enjoy them, as they always turn towards my garden. 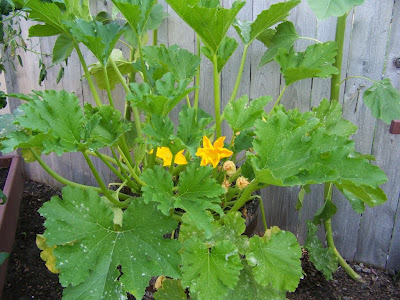 The zucchini is doing better in the barrel than the strawberry plants, although I've only had two zukes from it and it's already showing some powdery mildew on its leaves. 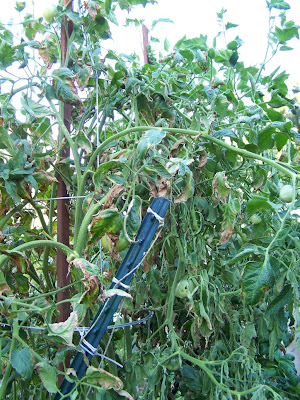 Oh, dear. Now we are at the poor diseased Brandywines. My very favorite tomato, and I'll probably not get any this year. This Pink Brandywine was the best of the three just two weeks ago, now it has begun wilting severely along with the previously diseased leaves. There are a few good branches way up high, and a few green tomatoes. I'll leave it be for now. 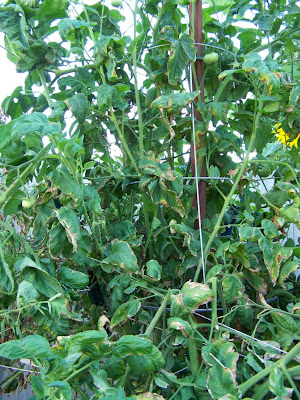 The Yellow Brandywine looks just slightly better, as it isn't wilting. I doubt there are more than three green tomatoes on the entire plant, but I have never tasted this variety so I'll let it go for now and hope I at least get one or two ripe fruits from it. 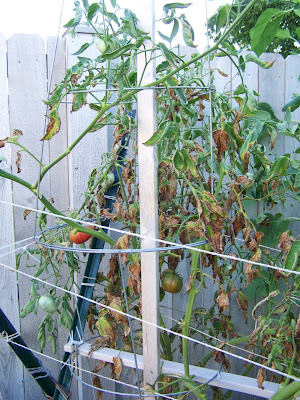 The third, another Pink Brandywine. I might as well give up and pull it out, ya think? I've never had diseased tomatoes back here, but it looks like this bed won't be used for them any more. It gets the most sun of any of the garden beds, so it's unfortunate the tomatoes won't be planted in it again. Maybe it will be next year's hoop bed. 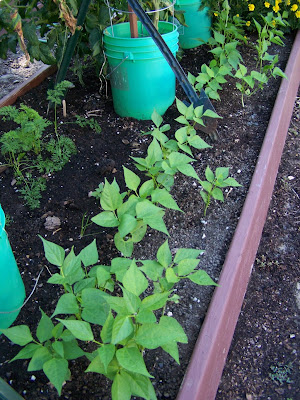 The tomatoes might be diseased, but the newly planted bush beans are loving the tomato bed. This is planting #3 of bush beans for fall, Gourmet Green French. I may have overdone the bean planting this year, the freezers are stuffed already. 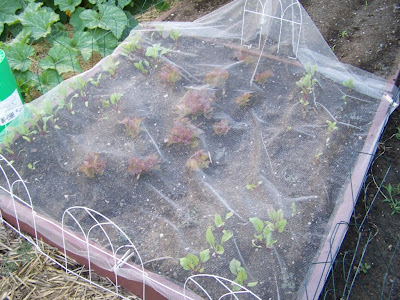 The lettuce transplants of July, the ones I thought had burnt from the heat, actually survived. Unfortunately I didn't have them covered, and the sparrows took them right down to the ground last week. I grabbed some net and clipped it over the top, and it looks as though they'll survive the onslaught. I have a few beets growing in this bed, but germination was rather spotty. It's getting too late to reseed the bare spots, so I'll not bother with it. I had planted spinach in the bed to the back, but either very little sprouted or the sparrows got to it, as the bed is practically bare. I will reseed it soon. 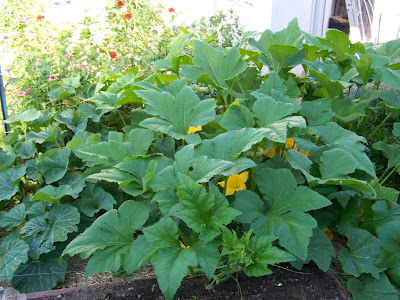 The squash patch is taking over the world. The bush butternuts aren't too bad, but that one pattypan squash plant in front, the one just full of blossoms, is growing all over everything in sight. I wondered if I should just pull it out, and then...... 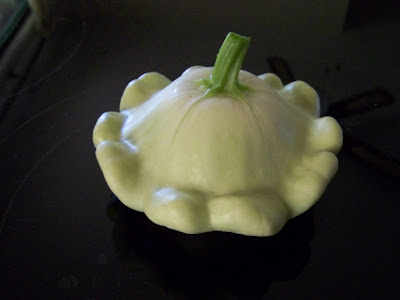 I picked this. Is that not just the most adorable thing you ever saw? I cooked up some freshly picked Fortex beans, added some fresh sweet corn kernels, then sauteed the diced squash (I hated to cut the pretty little thing!) in some butter, added the cooked and drained beans and corn, seasoned with just salt and pepper, and I ate two big platefuls for dinner! The squash was tender, slightly sweet, very mild flavored, and absolutely delicious. I'm not pulling the giant plant. I'll be picking another squash or two today, and I'm going to cook them by heating a baking sheet in a 400F oven, slicing the squash in half and tossing them with a bit of oil, s & p, then placing them cut side down on the hot pan and baking them until lightly brown and caramelized. 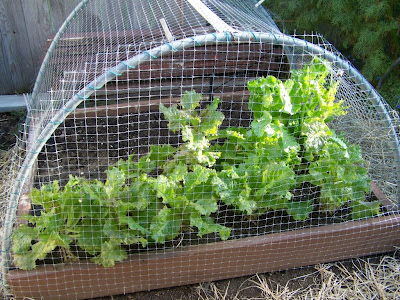 I think the lettuce bed, which has served me well (to the tune of 53 pounds) this year, is ready to be cleared of all growth and replanted for fall. The few plants at the front will stay for a while, as they are still looking fine, but the next row has finally bolted. All the others were harvested last week, then pulled. I must say, this has been a really good spot for lettuce growing, tucked in the corner with fence on two sides, shed to the south and morning sun from the east. 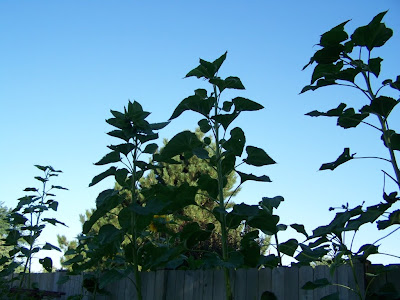 The sunflowers are about 12' high now, and still no blossoms. I have them tied to the fence....I hope they don't pull the fence down!