After our surprise snow on Thursday, the sun was soon out and its warmth not only melted the snow, but also warmed the gardener. I went out and prepped the first three feet of the 1'x10' strip of soil for the carrot bed. I hauled a couple of buckets of compost over, spread it on the bed, and then worked it deep into the soil with the spading fork. The bed had previously been dug to a depth of about a foot, so the soil was nice and loose. There were still some small roots to be removed, so I sifted through the entire section with my fingers, making sure there were no obstructions for this, one of my most precious crops. With all lumps, clumps and roots removed, I leveled and smoothed it with the rake, laid down three premade seed mats, and covered them with a mixture of soil and vermiculite. The ground was very damp from the melted snow and rain, so I didn't have to water the seeds in, just tamped everything down with the rake. I couldn't find my boards that I normally use to cover the carrots, so I grabbed a piece of floating row cover and folded it to size. I placed it over the seed bed and then placed some folded wire fencing flat over the top to hold the fabric down. The plan was to replace it with boards the next day.

The radishes that were planted on 3/9 were all up, so I planted two more short rows in one of the triangle gardens.
After attacking a few small weeds and grass clumps with the hoe, I raked the pathways again and got all the piles of garden debris picked up and disposed of...green stuff into the compost, and sticks and roots into the trash. I wonder if I'll ever get all those small roots raked out.

It warmed up enough to get out in the garden again yesterday. First I put the tomato plants (the big ones, not the seedlings) on the front porch for a bit of sunshine, and set the flat of brassicas and lettuces out in the yard for the same. Then I headed for the garden and prepped another 3'x1' strip for three more carrot mats. I don't know where Mel Bartholemew gets that 16 carrots per square foot. I put mine on 2" centers, hex pattern, and get 54 in a square foot. I've never had carrots grow much bigger than 1" across the top (I pull them young, and begin by pulling every other one), so I find the 2" spacing works fine. That makes 324 carrot seeds planted so far this week, with another 162 to go. That should be enough to take care of MY needs, now I have to plant some for the kids! I found my carrot boards, and covered this newly planted area. I decided to leave the folded row cover on the other section to compare germination speed...it was nice and warm under the row cover, and it will be cold under the boards. Of course, I might end up with cooked carrot seedlings! (*note: today the soil was really dry under the row cover. I'll have to find more boards.) 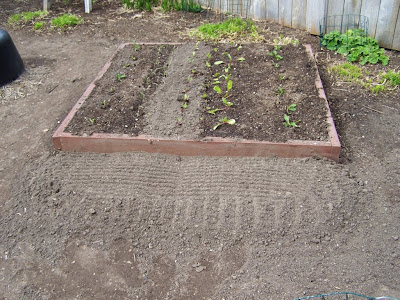 Next I planted the turnips. I don't care much for them, and nobody else will eat them, so I only planted a short double row. I decided they could go on the outside at the end of the 4' raised bed, where I had removed the other 4'x4' section. I had to dig down a foot and remove more roots, then I put in a lot of compost and worked it in well and made a lovely soft seedbed.
My next job was to attach string to some folding fences and slant it up to tie onto the kennel garden chain link for pea supports. I did that for the sugar snaps and for both sweet pea beds...it was so warm in the afternoon sun, it made the job quite enjoyable. I had time to clean out around a few strawberry plants, and it was time to go in and cook dinner. I made sure the seedlings were all safely inside, but made one last trip to set in a few Johnny Jump Ups near the lettuce garden. These were some little seedlings that didn't get potted up to larger containers. I mean, those seeds were so tiny that I way overseeded the flat, so I ended up with way more plants than I needed. I decided the area by the lettuce could use a bit of color.

Today the plan is to attack and dismantle the two half-barrel planters out by the back fence. They are rotting, the strawberries didn't do well in them last year, and I want the fence for my Fortex pole beans this year. I also would like to start removing all the plants from the strawberry bed, as it really needs to be renewed this year. That means at least 2-3" of composted manure will have to be added and dug in, and I'll have to either round up some plants from other areas in the garden or go buy some new ones. I'm tempted to do the latter, as I think I'd like to try a new variety. Maybe I'll check and see what is available locally in bare root plants. I'd still keep some of these day neutral plants elsewhere in the garden, but maybe I'd be happier with a June bearing variety so I can freeze and make jam all at one time, rather than having to save up the berries until I get enough to do something with them.
Later today...................never being one to stick to my plans, I decided to work in and around the kennel garden. 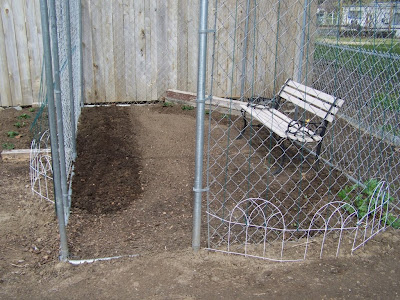 I began by double digging a 2' wide future planting bed along the inside (left) of the kennel garden. I carried in six buckets of compost for this bed, as I've decided this will be where the broccoli and Brussels sprouts will be planted. It should get some sun once the snap peas are harvested, and if the sprouts get too tall they can be tied up to the chain link. 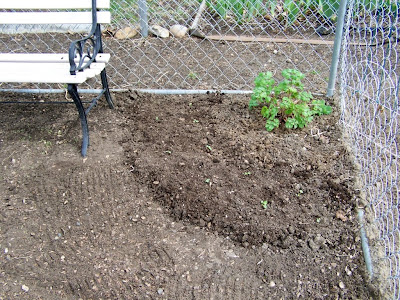 I hauled in a couple more buckets of compost, and dug a small border around the columbine, and a dozen little Johnny Jump Ups were transplanted. They're small, but they've been living outside for over a week, so I think they can handle it. If not, I have a bunch more that can replace them. 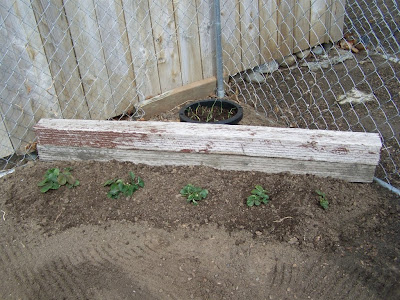 Another border was dug and amended with lots of compost, and five young strawberry plants were moved in from the strawberry bed. They can send out runners to their little hearts' content here. A container of onions was set into the bed behind the wood border. These were small leftovers from the bunches of Walla Walla sweets. Of course, I couldn't dispose of them, so they will be grown as scallions. Grandpa Ott morning glories will finish off this corner eventually, and cover two sides of the kennel. 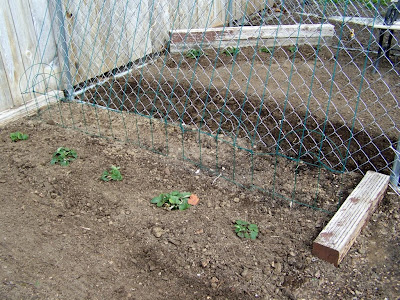 Next to the snap peas, another bed was dug and amended with compost. Five more young strawberry plants were moved here from the old bed. You can see how I strung lines for the snap peas to climb. This was done for both of the sweet pea beds as well, only the sweet peas got 6' high strings....I hope they get that tall! 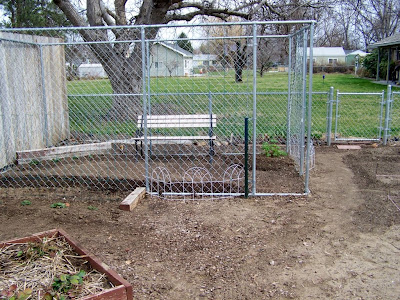 The kennel garden is all ready for final planting, as soon as the weather cooperates and the seedlings are large enough.
Elsewhere in the garden................... 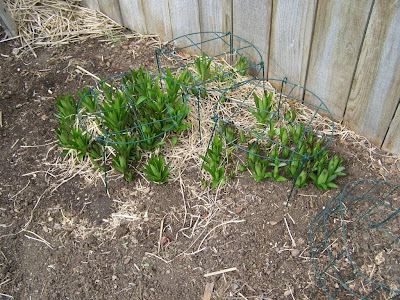 The lilies are up! 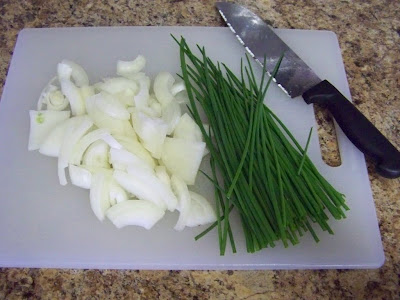