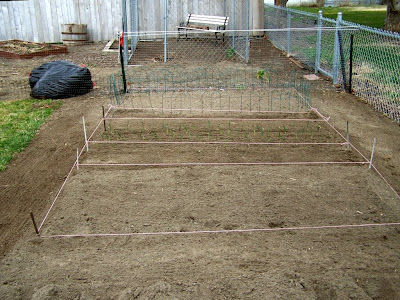 It warmed up into the low 60s today, and the wind wasn't relentless as it has been the past few days. A storm was predicted for the afternoon, so I worked as fast as I could. I got another eight feet of the east garden done, and two more beds (a 2' x 7' onion bed and a 3' x 7' potato bed) prepped, measured, staked and raked smooth. I tromped down and raked 18" paths around the two beds. 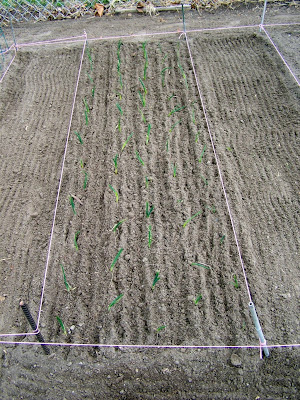 I was planning on waiting until after Sunday, when I'll be getting a load of composted manure, to plant these beds, but I just had to take advantage of the decent weather. I planted this bed with 68 Walla Walla sweet onion plants, spacing them every 6". I'll just have to top dress them with the compost after I get it. That's what I did with last year's onions, and they were gorgeous. 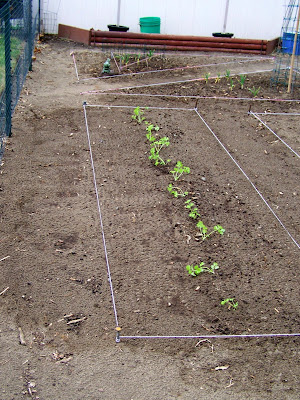 I had a bit of compost left from last year, so I amended this bed and transplanted my entire dozen celery plants. I hope they aren't being put out too early! I've never grown celery before. I spaced them 10" apart in the row. 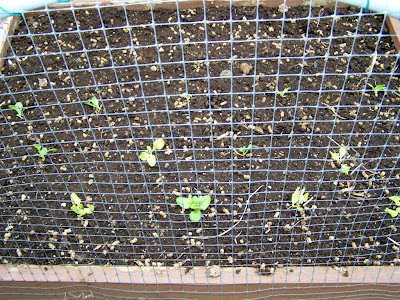 A short row (5 plants) of Parris Island Cos was added to the lettuce bed. That makes 14 plants total so far. It's covered with plastic mesh to keep it from being eaten by birds. 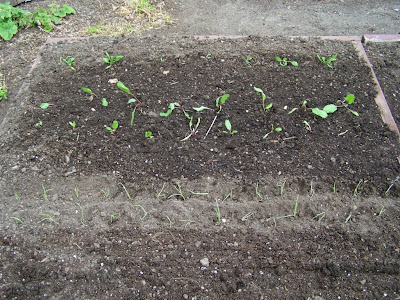 Since I had prepped this 4' x4' bed for peas last week, then found I had too few seeds to fill it, I decided to put in a few spinach seedlings (7), the puny little onion seedlings that didn't grow well for me at all (31 plants out of about 180 seeds planted!), and some of the beet seedlings (17). I'll not be starting beets in the house again, I think they do much better direct seeded. There is still enough room for a few more spinach seedlings, but they are too small to go out just yet. 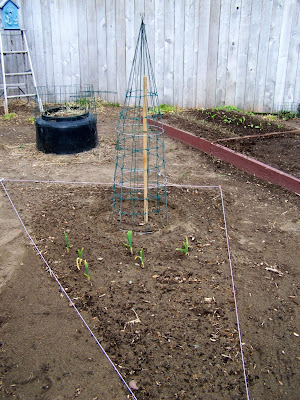 With only 35 Lincoln pea seeds to plant, I decided to erect a tepee for them and put them in the spot I have planned for a future summer squash plant. I used an upside down tomato cage, and strung it with some green yarn I had laying around. The peas were planted in a circle around the base.
It's nearly dinner time now, and the rain never did come. The ground was really dry from all the wind we've had this week, so I had to hook up a hose to the house water to give the newly planted seeds and seedlings a quick drink. I'm hoping for a good day tomorrow, as I have snap peas and sweet peas to plant, as well as another Walla Walla sweet onion bed and 40 hills of potatoes.