She was nicer to me than I expected on Tuesday. It was supposed to be cold and windy, in the low forties, but it turned out sunny and calm and perfect weather for the new garden project. I donned my coat and gloves, but the coat soon ended up over a fence post, rather than on the gardener.

It took most of the morning to get 40' of the fencing installed, and 24' of the welded wire dog barrier put on the bottom of it.

The afternoon was spent raking smooth the first 12' x 36' section of new garden and staking off the first four beds. I marked 20" pathways, which will be wide enough for my rake, and tromped down the loose soil on the walkways. The first four beds were marked off, visible small bits of root removed, and each was leveled and smoothed out with a rake. It was quite an easy job in that soft soil.

I tore down one of the three old half barrels that was rotting out, hauled that out of the garden, then raked the soil from it into a bed by the back fence for pole beans. The other two barrels will also be removed, and the Fortex beans will be planted in all three new beds next to the fence. Amy T., from Issaquah, WA, is sending me some fresh Fortex seeds! I had asked her to watch the seed racks in the Seattle area to see if she could find me a packet, as the seeds I had saved in 2010 turned out to have crossed with my nearby Kentucky Blue pole beans. I really wanted a new supply to grow for seed saving this year, but I was hesitant to pay about $14 for a few seeds and the shipping charges. This year, Fortex will be the only pole bean I'll grow, so unless my neighbors grow beans on the other side of my fence, the resulting seeds should be true Fortex!

I raked up and hauled out the pile of sod and roots that were in the middle of the garden. The largest roots of all were there, and impossible to remove, so I will move the bottom half of the old compost bin to set over the top and plant the butternut squash in it. The vines should grow down to cover its ugliness, so I think it will work out OK. 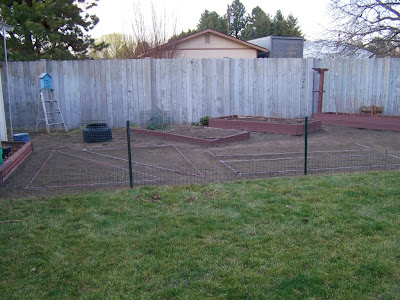 The new area of garden is beginning to take shape. The old fence line was right up against the raised beds in the background, so I gained about 12' of extra planting width. The triangle beds were necessary, due to the TV/phone/internet cable that is buried just beneath the surface. It will make an interesting visual arrangement! I have to make the best use of some odd spaces, so the top half of the old compost barrel, in the background, will hold a hill of cantaloupe. 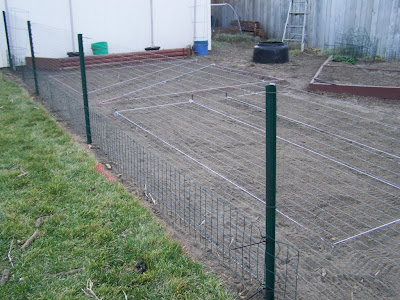 I reused the plastic mesh fencing that I had installed last year. I really like this stuff, it stretches tight, never sags or bends, and is practically invisible, allowing a good view of the garden. The welded wire fencing was also repurposed from the old east garden. I cut the 2' high fencing down to 1', and used cable ties to fasten it to the bottoms of the fence posts. That keeps my nosy garden dog Annie from pushing under the flexible plastic fencing.

My preliminary garden plan for the first four new beds. After I went through all the work of planning this, I discovered I'd made the triangle beds a foot deeper than they really are. That means a do-over, but it will still be similar to this original plan......or maybe I'll just plant everything a tiny bit closer together. 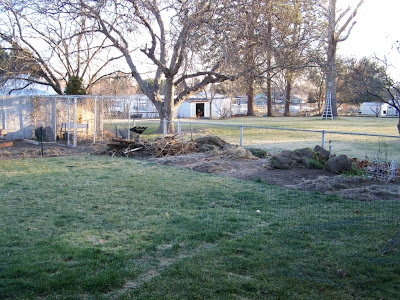 I still have all this mess in the old east garden! My son-in-law is supposed to come over today or tomorrow to load the sod and take it to a new home they are sodding in their mobile home park. I have no idea what we'll do to get rid of the pile of roots, as they are too water logged to burn and too large to put in the garbage can for pickup. 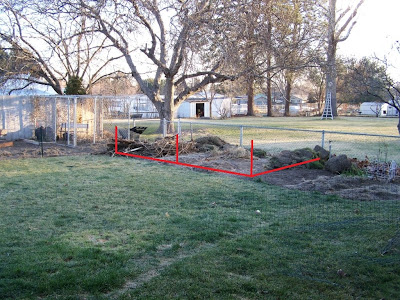 Once the mess is cleared, this area will have to be refenced (red lines). It's too bad we dug out the posts last weekend, but the original plan was to sod this entire area. Now I've talked Mr. Granny into letting me keep most of it in garden, minus the area around the lilac tree (a source of multiple suckers, which cause me so much extra work to control). I want to set the corner posts in concrete, as I'm having trouble keeping the T-posts straight in this soft soil. This area will be perfect for planting corn, potatoes and onions.....the garden space hogs. There is still a long section of welded wire fencing, waiting to be cut for the final installation. 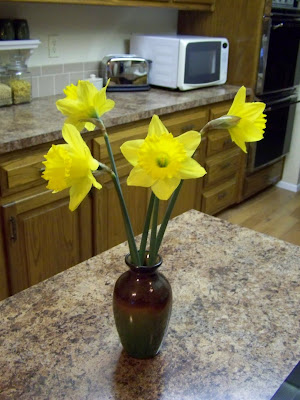 While I'm waiting for it to warm up enough to get outside and start working, I'm going to have my morning coffee with my nose buried in these lovelies, the first sign of spring at Granny's house.