We continue our stroll through the garden.... 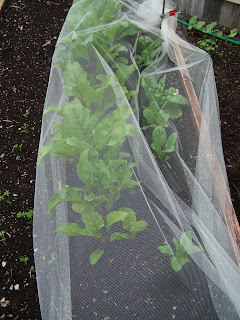 This is the garden bed where all the spinach germinated then disappeared, three rows of carrots became 11 carrots, and about half the beets were consumed by who-knows-what.  The beets that survived the attack are looking just beautiful under their protective netting.  About a half dozen spinach plants (from a later seeding) also survived.  Half of the bed is being wasted for planting something else, due to those 11 carrots.  I may try moving them, and if they don't survive it will be no big deal.  I'd like to get some bush beans started there. 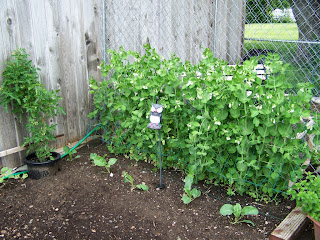 Sugar snap peas are very close....I picked and ate a tiny one yesterday.  Five cauliflower plants are struggling in front of the peas.  They survived 3-year-old Alicyn the other day.  She was fascinated with the owl that hangs there, and kept stepping on the small plants.  The owl has a motion sensor, and goes whooo-whooo when something passes by.  Of course, we had to make multiple trips to the garden to make the owl go whooo-whooo.  After a while I grew weary of taking her to the garden, so I pulled up the stake that holds the owl, moved it over to the edge of the patio and set it up for her.  For some reason the owl's whooo-whooo got stuck and would not shut off.  After a while, Alicyn came in the house and said "Grandma, that thing is really annoying".  She can be so funny for her age!  I showed her the shut off button, so now she can turn the annoying whooo-whooo off. 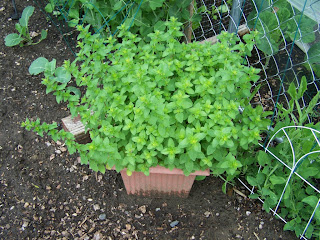 Oregano that's so pretty I don't want to cut it.  I think I'll just let it blossom. 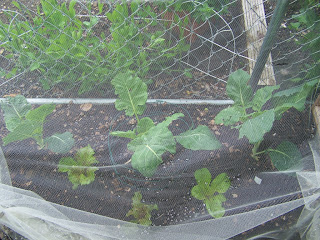 The three Brussels sprouts had to be covered with netting after birds chomped off some leaves.  They didn't bother the lettuce plants in the front.  For some reason, the birds don't bother the colored lettuces, only the green ones. 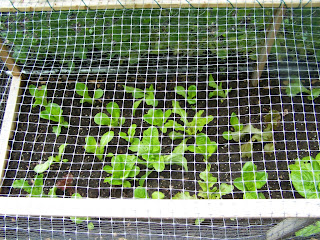 Speaking of lettuce, The Thing I has been replanted with new seedlings.  Only one mature plant remains, and will be pulled this week.  More seedlings are ready to take its place. 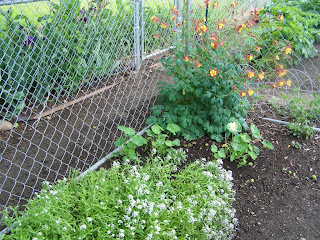 A pretty corner in the Kennel Garden.  This columbine lived in my shade garden for years, and would only get one or two blossoms.  After I moved it to the Kennel garden, it really came to life.  All of the alyssum and nasturtiums in this garden are volunteers from last year's plants.  I planted quite a few Johnny Jump Ups around the columbine, but something ate all but one or two.  See the neighbor's pretty (NOT!) weeds behind the fence? 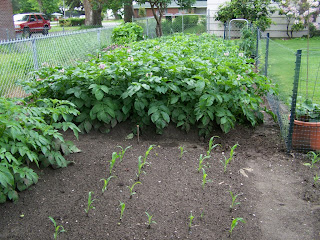 Silver Queen corn had spotty germination.  I sure can't say the same for the potatoes!  I thought I'd be able to find a few edible sized potatoes by now, since they are blooming, but I only came up with a single walnut sized one which was promptly washed and eaten raw. 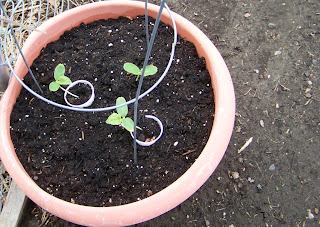 The cantaloupe has a long way to go.  I had a lot of trouble getting these seeds to germinate, so I just kept planting them in different places in the garden.  They seem to be doing the best in this pot, but if all of the seeds I've planted turn into mature plants, I'll have to go into the cantaloupe selling business!  I'm quite sure there are more than a dozen plants growing now. 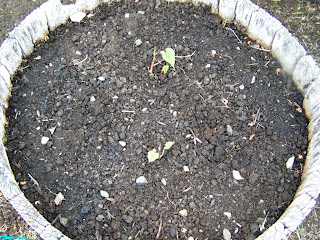 The sweet potato slips were quite small when I planted them, but the roots were many and huge.  This is my first try at growing them for tubers.  The mother potato went into a hanging pot on the patio to hopefully become a pretty vine. 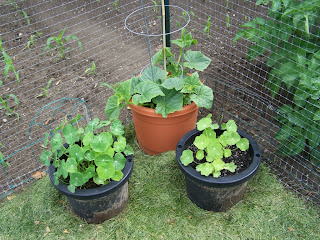 Spacemaster bush cucumbers are beginning to blossom.  Nasturtiums are growing in the two smaller pots. 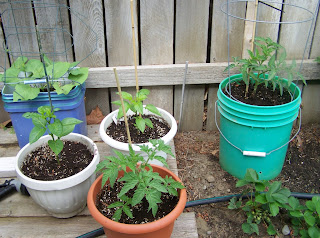 More pots and buckets.  Fortex pole beans are growing in the blue bucket, hopefully to become my seeds for next year.  At $8 a packet, it only makes sense to grow some for seeds.  I think those are some of Dave's Happy Yummy sweet peppers, along with a Pixie tomato in the three pots. 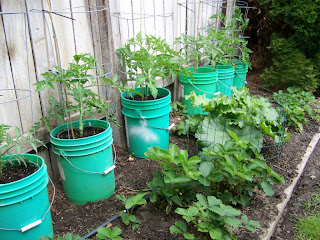 The West Garden with its buckets of tomatoes, rhubarb and strawberries. 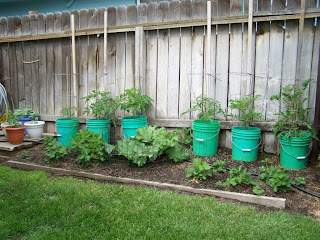 Another view of the West Garden. 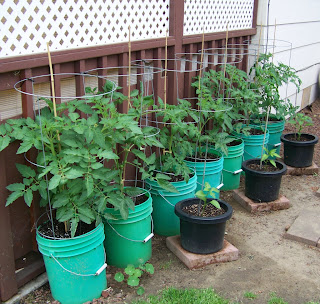 "Tomato Alley".  The tomatoes are growing by leaps and bounds, and two of them are fruiting.  The peppers are slow this year, but finally beginning to show a bit of growth. 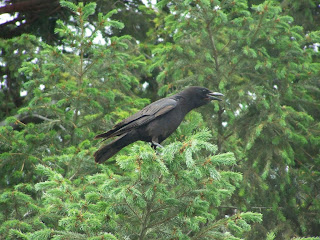 You want to hear "annoying" ?  Try listening to this guy and his friend conversing with each other all day!  They are my constant garden companions, and the reason I don't leave my bedroom window open in the summer.  The cawing begins at daybreak, right outside my window!