Yesterday I pulled all of the spring planted green bush beans.  I carried the plants to the patio and made myself comfortable while picking the beans off.  This morning I tackled the purple Velour beans, and did the same.  I probably could have got one more picking from them, but they were beginning to crowd the sweet pepper plants, and I have another planting of them that is blossoming now, as well as pole beans that are being picked. 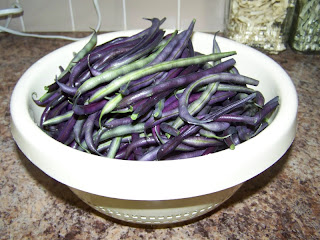 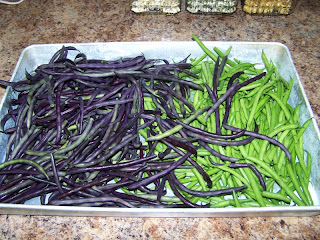 I snapped the ends off, then blanched, cooled and drained them well.  They were placed on plastic lined trays and frozen before bagging.

While the beans were freezing, I made five 5' carrot seed tapes.  Then I dug through the short potato bed #1, hoping I had all of the potatoes removed.  I didn't find any, so I smoothed out the bed and planted the five rows of carrots.  I had to erect a makeshift fence around the bed to keep Annie and Otto out of it.  They just love their days in the garden, second only to their love of going bye-bye in the car, so I've been leaving the gate open for them now that most plants are large enough to take it.

By then it was 96 degrees, and too hot to work outside.  Once in the house, the phone rang and it was my youngest son asking if I wanted a box of apricots, so off we went to pick them up.  I only had enough sugar and pectin for one batch of jam, so the rest will have to be done tomorrow. 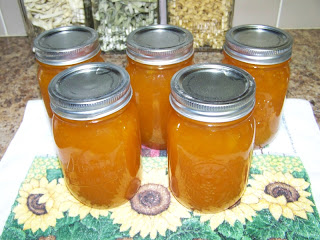 I ended up with five pints of apricot pineapple jam for the pantry. 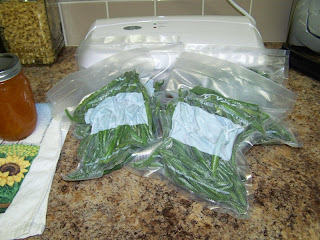 And bagged up 3 1/2 pounds of green beans for the freezer.

The remainder of the apricots will have to be made into jam tomorrow.  I'd also like to get another bed dug and planted in the east garden.  I think I'll put in another row of bush beans, and a row of cabbages.  That's all I'll have room for until I dig another bed of potatoes, which has to be done real soon!