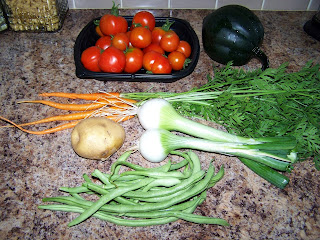 7/23 - I pulled the first of the storage onions.  These were the ones I grew from seed and didn't think were going to survive.  They aren't terribly large, but much better than I expected them to be.  Only two, which were going to seed, were brought in and weighed, the others are drying.  I also picked a Honey Bear acorn squash.  It was yellow on the bottom, and the rind was so hard I couldn't puncture it with my thumbnail, indicating it was ripe.  It wasn't.  It was edible, I baked it and ate it for lunch, but it tasted more like a potato than a squash.  While prepping a garden bed, I speared a potato that had been missed in last week's big dig.  I'm still pulling small carrots, and have found one bed to be infected with nematodes.  So far I'm getting straight carrots from the other plantings.  I'm finding quite a few Victor and Bloody Butcher tomatoes, as well as more Fortex pole beans. 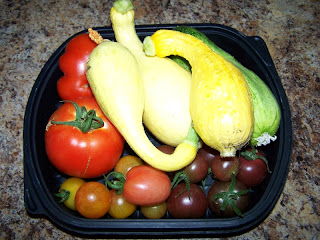 7/24 - A couple of the larger tomatoes, along with Black Cherry, Isis Candy and Una Heartsock cherry tomatoes, join 3 yellow crookneck squash and a lone cucumber. 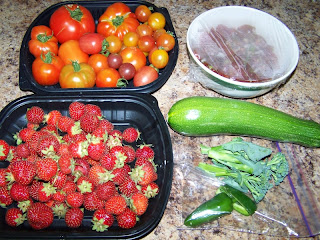 7/25 - I had the Black Cherry tomatoes and a Jalapeno pepper chopped and chilling for dinner when I remembered I hadn't photographed the day's harvest.  I also picked a few broccoli side shoots, more tomatoes, a zucchini and a good sized bowl of strawberries. 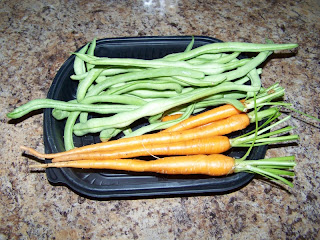 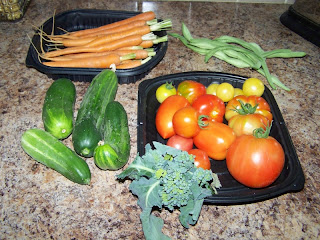 7/26 - A morning trip to the garden for carrots and pole beans, then an afternoon harvest of more carrots, more beans, cucumbers, broccoli and tomatoes. 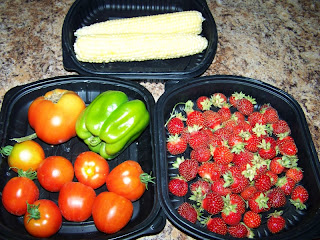 7/27 - My first corn harvest, and was it ever good!  Tomatoes, a green bell pepper and strawberries were also picked. 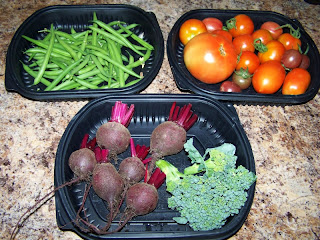 7/28 - The first fall beets were pulled for dinner.  They are still tiny, but I was craving pan roasted beets.  Some large broccoli side shoots were found, and joined those picked earlier in the week for another dinner vegetable.  The second planting of bush beans has begun to mature, and about five different varieties of tomatoes were picked. 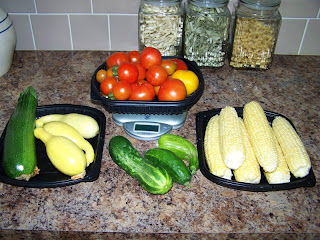 7/29 - Six ears of corn were picked, and four of them were promptly consumed by two people!  Tomatoes, cucumbers, zucchini and crookneck squash completed the day's harvest.


Daphne's Dandelions is the host for Harvest Monday, where everyone can share links to their harvest for the week. Please visit her blog and leave a link, so we can enjoy your harvest photos!