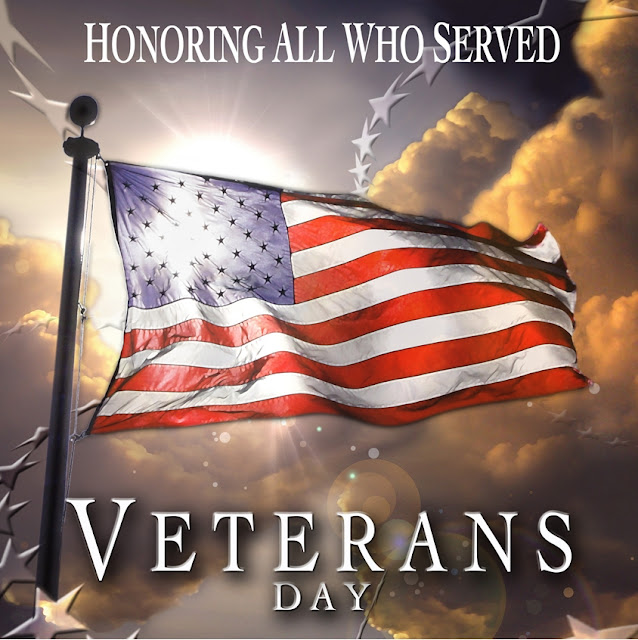 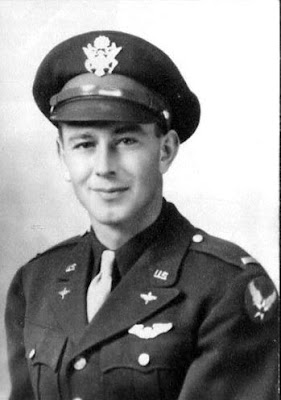 Dad was an officer and bomber pilot in the Air Force during WWII, discharged as a major.  In February of 1944, he lead the 392nd. Bomb Group in the first bomb drop on Berlin.  For this, he received the Presidential Citation, which was presented to him by General James Doolittle.  The mission had begun a week before, but the crew had to turn back when the temperature in the plane dropped to -70F, freezing the airplane instruments.  The crew suffered from the cold, but also from burns received from heating coils that had been put in their clothing. Dad was also the recipient of the Purple Heart, the Distinguished Flying Cross and the Air Medal.

Dad flew many missions during WWII, but the one he remembered most was Mission #62.

Again, for the second mission running, the Group was to sustain heavy casualties in aircrew members and aircraft. Briefings for (33) aircrews were held between 0310-0430 hours with (31) taking off beginning at 0720 hours. Up front, the 579th Squadron was leading with Major Keilman in the lead ship as Command Pilot. Weather in the Group assembly area was extremely poor and difficulty was experienced in forming the mission aircraft. Major Keilman managed to assemble approximately two Sections consisting of (19) aircraft and proceeded on course but formation flying was impossible to maintain with any integrity because of enroute weather conditions. Approximately (60) miles north of the Fresian Islands at position 5416N-0449E, Major Keilman in the lead was left no choice but to give the recall word because of weather problems encountered. His two Sections returned to Wendling, landing around 1130 hours.

In the meanwhile, Captain Barnes of the 576th with Lieutenant Jackson as lead Bombardier had been briefed to lead the third Section of (12) Group ships flying high right squadron off of the 44th Bomb Group out of Shipdham. Captain Barnes managed to form up with some ships of the 44th, but unable to locate the main formation, he proceeded on course having not received the recall order. As a result of the extreme difficulties all units were having in formation assembly due to weather, Captain Barnes’ formation finally numbered (26) aircraft by stragglers from other Groups joining his group of 392nd ships. Just south of Lualand Island, this formation was attacked by (30) FW-190 and ME-109 aircraft with the attacks being concentrated on the straggling aircraft just joining the formation. An estimated (10) ships were lost from these with the remaining (16) under Captain Barnes pressing on to the target, bombing it with incendiaries with fair results. A good fire pattern was observed over the aiming point. The aircraft lost on this raid numbered (3) one of which crash landed on return with no aircrew injuries.

In the 578th, (my Dad's) crew in #485 suffered a mid-air collision with a 389th Bomb Group ship over Dereham. Eight (8) crew members were killed in this collision with Dad (the pilot) and his copilot surviving the crash, though the copilot had broken legs.

578th pilot 2/Lt  (my Dad) was flying plane #41-29485, which suffered a midair collision over England during formation with a B-24 assigned to the 389th Bomb Group at Hethel, B-24J #42-99982. According to the Report of Aircraft Accident, "The collision between [the two planes] occurred during the process of Division Assembly prior to an operational mission. Aircraft #982 was hit by aircraft #485 at approximately mid-fuselage from an angle of about 90 degrees on the co-pilot side. Aircraft #982 was flying in the #2 position of the high right element of a 12 ship squadron at an approximate altitude of 7,000 feet. Both waist gunners of aircraft #982 were able to execute successful parachute jumps, but they did not, however, see the other aircraft involved in the collision and therefore cannot help in a statement of the cause. The nine other crew members [in #982] were killed in the ensuing crash. The assembly was done under instrument conditions through a thick overcast. Weather conditions at the time of the accident were reported as follows: Visibility 2500 yards; surface wind South 6 mph; 7/10 low cloud at 5000 feet, 2/10 middle cloud at 12000 feet. It is believed that neither pilot nor any member of crew was able to see the other aircraft because of weather conditions until it was too late to avoid the collision."
(Official Website of the 392nd. Bomb Group) 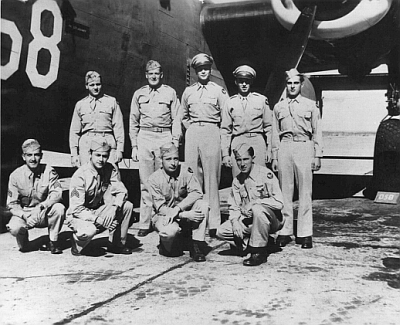 All crew members were lost, with the exception of the copilot and my Dad (back row, second from right).

I remember meeting that copilot when I was about 5 years old, and both of his legs had been amputated.  Dad seldom talked about the incident, it was such a painful memory.  He did say the approaching aircraft was trying to enter the formation when it hit the back of Dad's B-24.  There was no way to save his crew.  All of those behind the cockpit had been killed, with the exception of one.  Dad had the horrible memory of seeing him at the door of the cockpit, covered in burned and burning flesh, screaming.  Knowing they were unable to save their crew member, Dad and his copilot bailed out.  The copilot's legs were nearly severed by a propeller, while Dad only suffered miner shrapnel wounds.  Less than a week later, Dad was assigned another crew and another bomber.  There was no time off for mourning the loss of his crew during this terrible time of war.

* Wendling is a former World War II airfield in Norfolk, England. The airfield is located approximately 4 miles (6.4 km) west-northwest of East Dereham.  Opened in 1942, it was used by both the Royal Air Force and United States Army Air Force. During the war it was used primarily as a bomber airfield, being the home of the United States Army Air Forces Eighth Air Force 392nd Bombardment Group. Source: http://en.wikipedia.org/wiki/RAF_Wendling 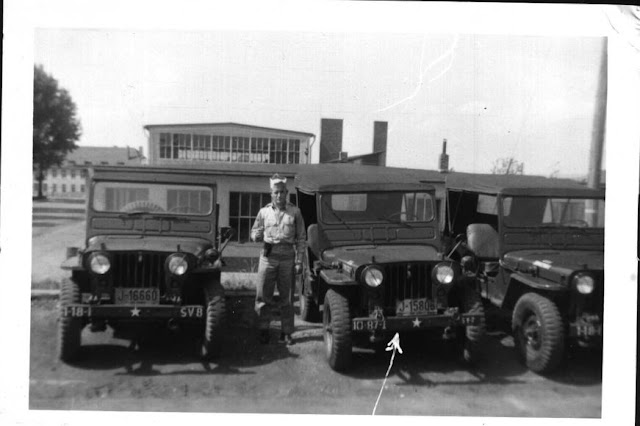 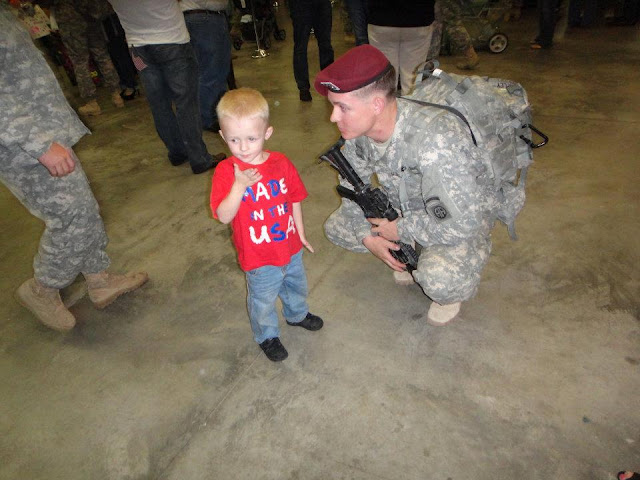 Grandson, presently a Paratrooper in the U.S Army 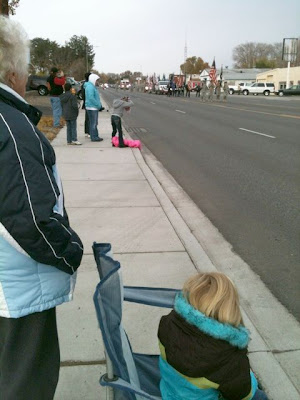 A cold day for the Veterans Day parade! 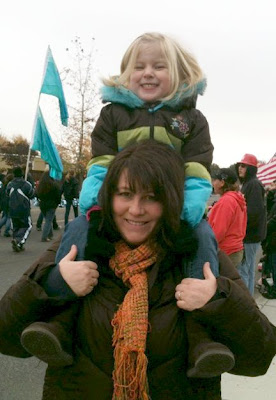 Alicyn has a good vantage point from her Mom's shoulders. 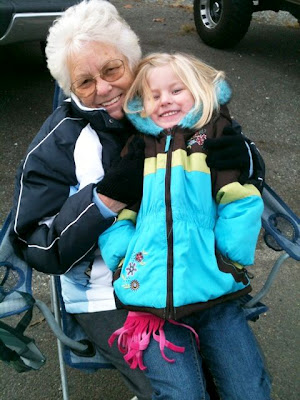 Then finds a warm spot on Granny's lap. 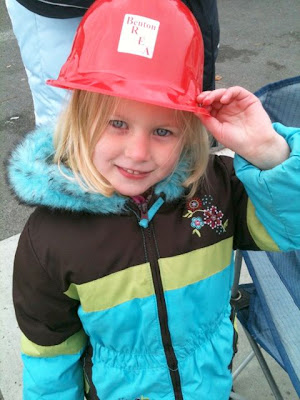 Alicyn tips her fire hat to the brave men and women who serve our country.