After I blogged about all the leaves my neighbor had left for my garden (November 8, 2012 - Ask and Ye Shall Receive), and how I was trying to get them chopped up with the mower and dug into the garden (November 17, 2012 - John Digs Autumn Leaves), Spiderjohn left the following comment:

"Granny, you should get a leaf blower/vacuum/mulcher. I think mine was about $40 from Lowe's. I've had it about 5 years and wouldn't be without it. So much better than a lawnmower with a mulching blade. And, much quicker. Turns 10 bags of leaves into maybe 1 bag. I use the leaves in my compost tumbler and in my beds. They decompose so much faster when they are really mulched up fine!"

To which I replied:

Spiderjohn, I hate to tell you I have one, but Mr. Granny said it was a pain to put the leaf catcher on and now he doesn't know what he did with the attachments. I bought it (from Sears) on sale at a time when we didn't need it for leaves, so by the time I did need it he'd already lost the part(s?)and the directions!

Well, Spiderjohn, I'm happy to say Mr. Granny and I went out to the garage and dug around until we found all the parts and the directions.   Mr. Granny scratched his head a bit, and finally said he'd try to get it figured out........."But not today".

I told son John about it at dinner on Thursday, so he promised he'd come over after work on Friday and get it put together.  After he got here, it probably took him all of ten minutes to get it done. 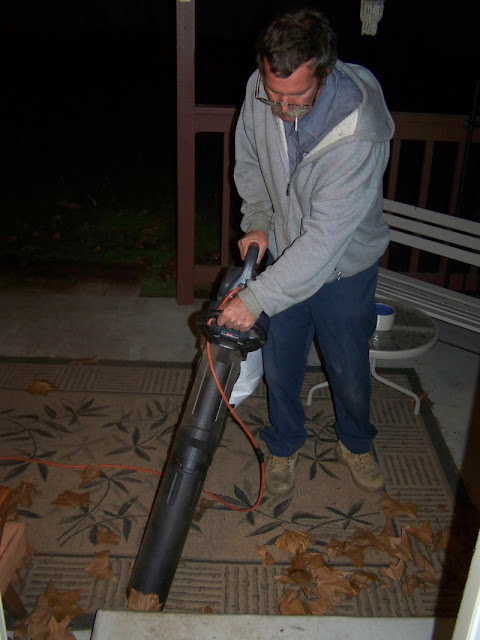 We tried it out on the leaves that had blown in on the patio.  It sucked them up really fast, mulched them fine, and threw them all over the patio.  Then we closed the zipper on the bag and started over.  LOL!

It rained Friday night, so I was hesitant to try it out on the leaves in the yard.  I decided to give it a try anyway, and with Mr. Granny standing by to help, I sucked up enough leaves to fill a large garbage can twice. 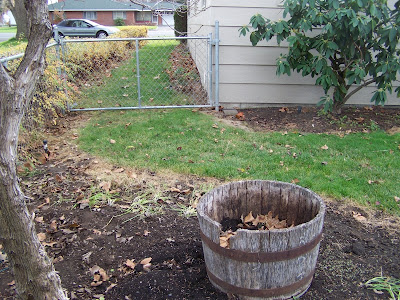 Leaves had blown up against the gate, nearly three feet deep.  I sucked up all of those, then went down the hedge and along the house for as far as the extension cord would reach. 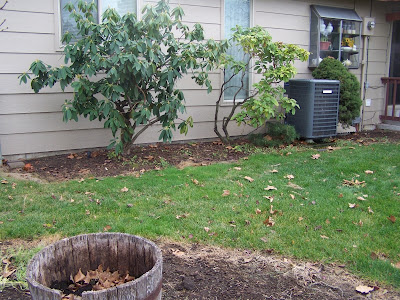 The leaves were thick along the back of the house.  Eventually I'll go back with the leaf blower and corral the remaining leaves into a smaller area. 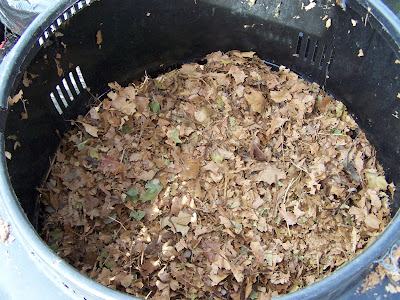 The old black compost barrel, barely half filled with beautifully shredded leaves.
Thanks for that kick in the rear, Spiderjohn! 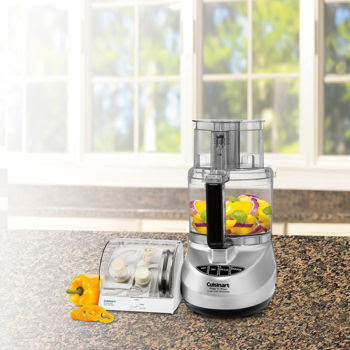 Daughter Amy came for coffee at 8, then we headed for Costco at 8:30.  Quantities being limited to stock on hand, I didn't want to take a chance and miss out on a good buy.  I really didn't think there would be that many people there, as their "Black Friday" specials were actually on sale for three days, but the line ran all the way from the front entrance out to the street!  It was cold and windy, and we really didn't want to stand in line, so we decided to sit in the car and wait for the line to move.  Once the doors opened, the people began moving in really fast, so we walked over and got a cart, and within a couple of minutes we were in the store.  We headed straight for the small appliances, grabbed the processor, went to the checkout where only one person was in front of us, and we were back out in the car and heading home in about ten minutes total! 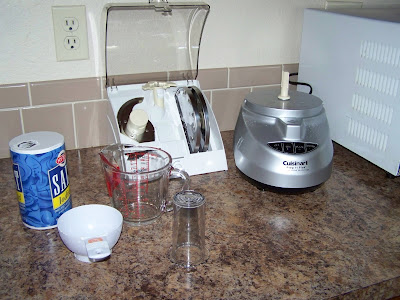 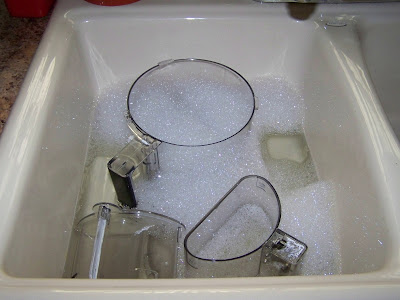 Here's the rest of it.  I've been putting it to good use! 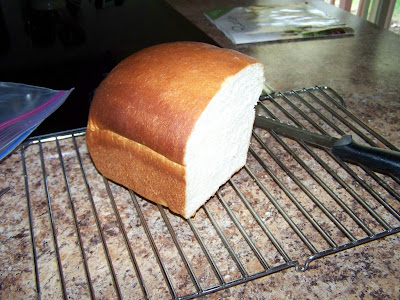 Right after I brought it home, I made a loaf of bread for hot turkey sandwiches for dinner.  Then we had toast for breakfast this morning, and the loaf is already more than half gone.  I love using the processor for bread dough, the loaves seem to rise much nicer and the crumb is finer than when I use the dough setting on the bread machine. 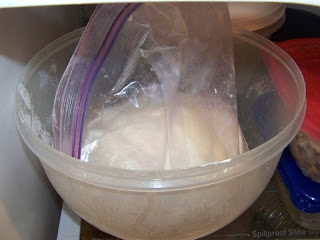 This morning I whipped up a batch of pizza dough.  This is a recipe that calls for refrigerating the dough for 3-5 days, so I'll have to let you know how it turns out.

By going to Costco rather than ordering on line, I saved $10.99 shipping charges, and I got a nice Costco cookbook to boot! 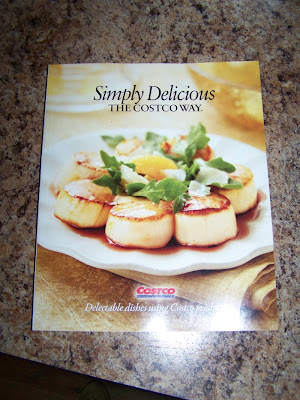 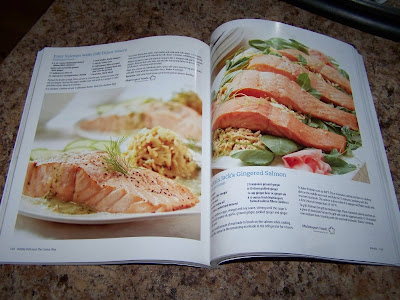