*The man finally did something right!

He walked in the house and handed me some metal tubes.  At first I thought they were rolls of quarters, and wondered where on earth he got them.  Then he led me out to the front porch and showed me......... 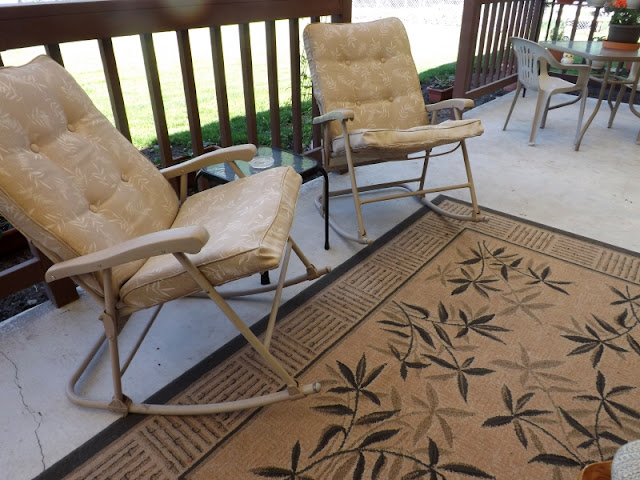 These outdoor rocking chairs were seldom used.  They are comfortable enough, but the front part of the rockers stuck out about 8" and they were ankle breakers!  One couldn't walk by them without getting gouged by a rocker.  I think I've spent the last four, maybe five years complaining about them.  Well, today Mr. Granny cut them off!  Did a darned good job, too.  I immediately moved them to the patio, and hid the old folding chairs in the garage.  Now I have a comfortable place to sit.  If I ever find the time!

*He's actually done a few things right in the 50-plus years we've been together, otherwise I'd have given him away a long time ago  ;-)

I had to start hilling the potatoes today.  With the wide rows, I could only bring up the soil from the paths on each side of the bed, so I began filling up the center with semi-composted leaves.  I've never used leaves like that as a mulch, so it remains to be seen how well it works.  I have used the leaves layered with soil in previous potato beds (leaves underneath, soil over the top), and that worked great.  It made the soil nice and loose for stealing those baby potatoes without harming the plants.  I have that big bin of decomposing leaves, so I might as well use them wherever I can.

I checked the carrot bed where the carrot seedlings have been disappearing, and there isn't a single seedling left to be seen in that entire 3'x6' bed.  I guess I'll be planting beans.

I saw 3 ripening strawberries tonight, but pill bugs were already devouring one of them.  I'm quite sure that's what took out my carrots and a couple of cabbages.  It looks like earwigs will also be a big problem in the garden this year.  My celery is full of baby earwigs.  Wire worms are eating the radishes, and they are in the same bed as the parsnips.  That doesn't bode well for the parsnips.  I think the bugs will be eating better than we do this year.  That's the way it goes when one wants to grow organic.  I'd rather share with the critters than consume poison.

PS: The rhubarb pie was good, but a little dry.  I think that was because I substituted Splenda for part of the sugar.  The next time I make it, I'll omit the flour in the filling and use a streusel topping in place of the top pastry crust.  That will cut the calories and fat a bit, but it will still be only an occasional treat.  I gave my second slice to Granddaughter, which saved me from eating another 511 calories.