Mr. Granny and I have been trying to eat lighter and healthier meals these past few months, but that doesn't mean we will be giving up all those finer things (for us) in life.....like rhubarb pies in the spring!  We are mainly practicing portion control, which means I weigh and/or measure nearly everything and stick quite strictly to the amount per serving.  Last week I replaced my usual 9" pie plate with a 6", which gives us four slices of pie rather than 8.  That way we don't rush to eat an entire large pie while it's still fresh.  (Since last November, I've lost nearly 30 pounds, 2 more than the 28 I was aiming for.  Mr. Granny has lost just over 30 pounds, and has just 5 to go!). 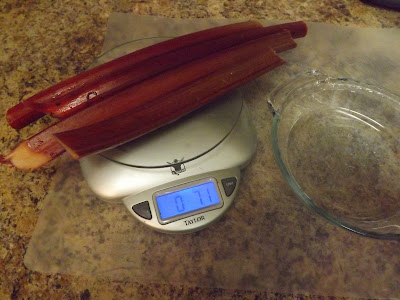 I picked what I thought would equal two cups of sliced rhubarb, but the 7.1 ounces was a bit short so I added two more stalks.  That was 10.3 ounces total, a bit more than I really needed, but I made a really full pie.  I think 9 ounces would have been perfect. 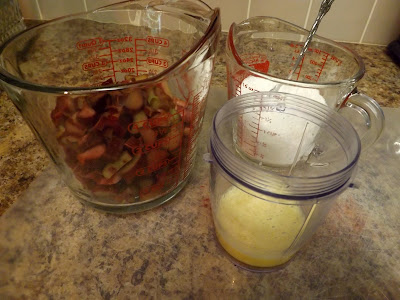 I used my regular Rhubarb Custard Pie recipe, but made a single crust pastry recipe and cut the other ingredients in half (I beat the egg and measured out 2 Tbsp.).  To lighten it up a bit, I used two parts regular sugar to one part Splenda.  I also left off the cinnamon sugar topping, which made a rather pale pie.  I think the next one will have the cinnamon sugar added. 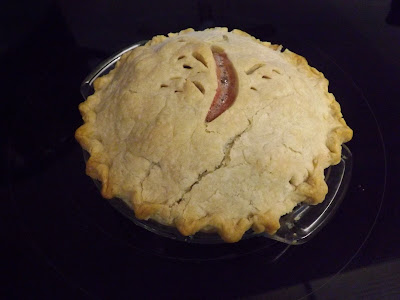 A nice little 6", 4-serving pie for tonight's (and tomorrow night's) dinner!  I'll let you all know how it tastes.

**YIKES!  I just entered this recipe in my nutrition program.  This is for 1/4 (one serving) of the mini-pie.  I won't be eating rhubarb pie often! (PDA is my Personal Daily Allowance). 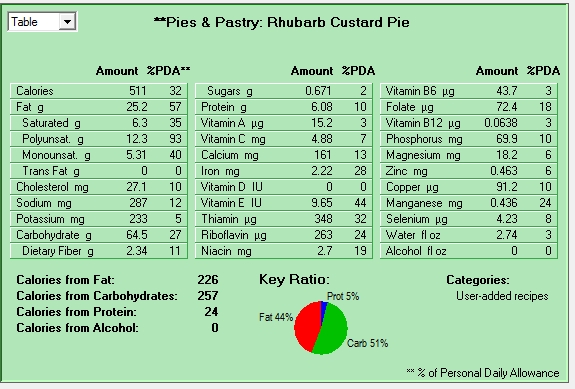