I've never bothered with a fall garden before, as we spent so many years travelling to AZ for the fall and winter months.  Now that we've sold the Arizona property and enlarged the home garden, I decided to give it a go.  Of course, I do have that garage full of cow poop, so it will be put to good use now! 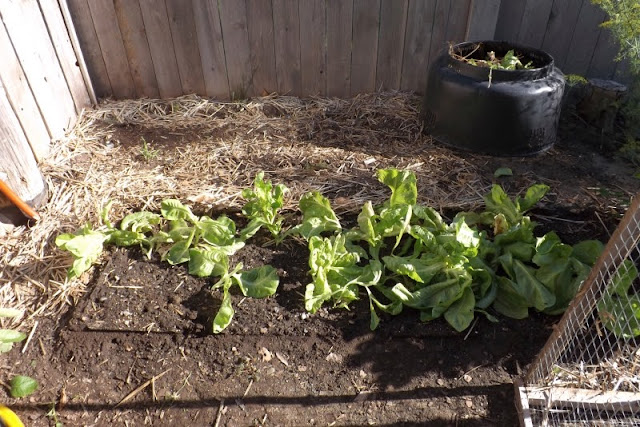 In the small area behind the garden shed, the remaining Anuenue lettuce was trying to bolt and turning just a bit bitter, and the carrots I sowed the week the temperature soared over 110F did not germinate....well, 2 carrots did out of 3 rows seeded, so this was my starting point. 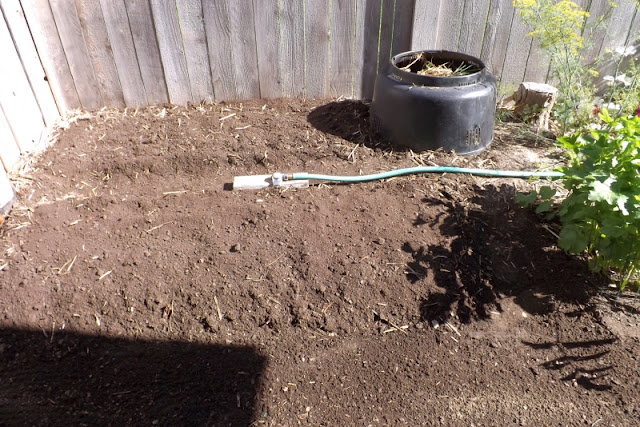 I pulled the lettuce, tilled in a couple of inches of composted manure along with the little bit of straw that was littering the bed, raked it into two wide raised beds, and topped that with another layer of manure.  I worked the top layer into the soil with a hand cultivator, then smoothed and leveled the two beds. 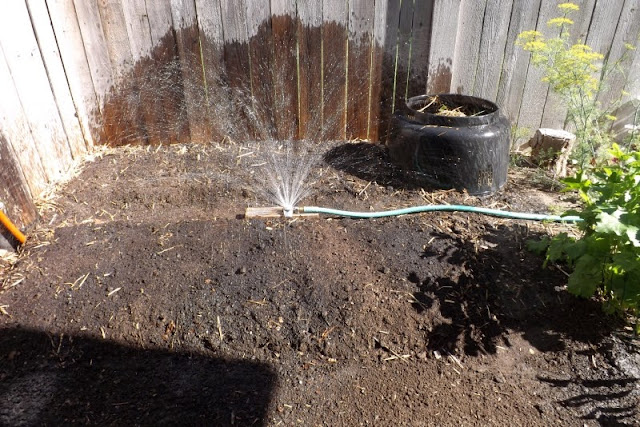 I alternately watered, and raked the beds smooth as they settled.  They are now ready for planting.  The plans are to pound in metal fence posts to support netting for sugar snap peas in the back bed, which is only 4' long.  I'll plant the peas on both sides of the netting, and keep the rows toward the back of the bed, giving me room for a single row of bunching onions at the front.  The front raised bed will hold nothing but carrots.  I didn't have a good year for carrots, so I'm hoping to get some decent ones before winter.  Oh, I also moved that 1/2 of a compost barrel over where it belongs, exposing another bunch of small lilac tree trunks that I hope to put Mr. Granny to work on.  They aren't rotting at all, unlike the maple tree roots, so it will have to be taken out with the chain saw. 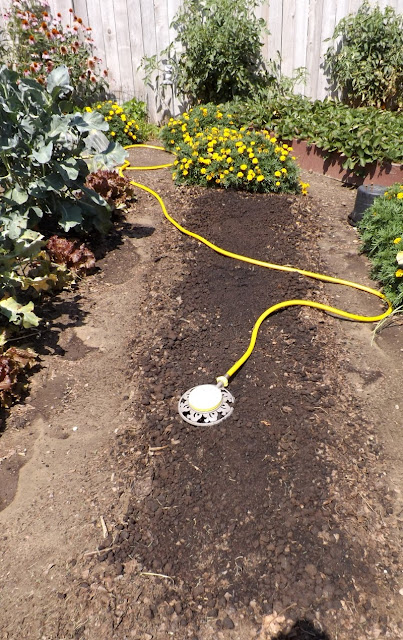 This was an earlier potato bed that was trench composted as the potatoes were dug, and then covered with chopped leaves from the leaf compost pile.  I added composted cow manure and tilled it in.  I was surprised that all the kitchen scraps, except for a few corn husks, had already completely disappeared!  I'd say most of them have only been in the ground for 2-3 weeks at most.  After I tilled it up and raked it smooth, I added more of the cow manure, and repeated the watering and raking as it settled.  I've decided to use this bed for my new strawberry plants.  I've been letting them form runners in the flower garden, and there are a lot that are now well rooted.  I've been reading about summer planting strawberries, so I'm going to give it a try.  Ray, from Tennessee Country Living directed me to a book by E.P. Roe that I found quite interesting, and the chapter pertaining to summer planting can be read at
http://www.readbookonline.net/read/33872/71005/ 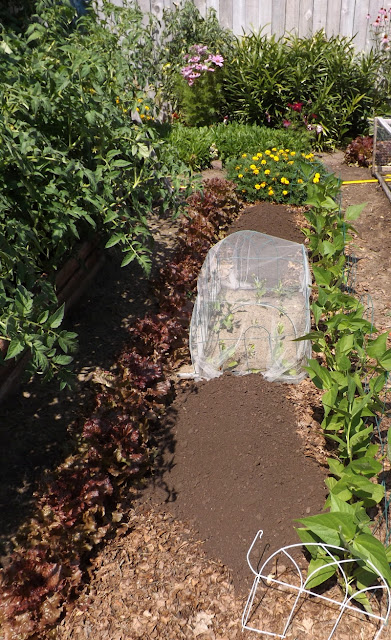 The spring onion bed was empty, except for a few beets, a row of bush beans and the summer lettuce, so chopped leaves and four 5-gallon buckets of manure were added and will be dug in later, when I need the space for some cabbages that are just beginning to germinate. 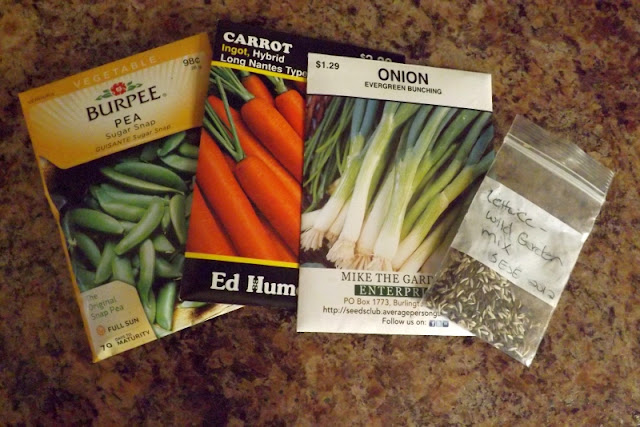 These are the first seeds that will be planted in the fall garden.  I still have to find a spot for the lettuce mix, but I think there is room for a small patch of cut -and-come-again greens in the kennel garden. 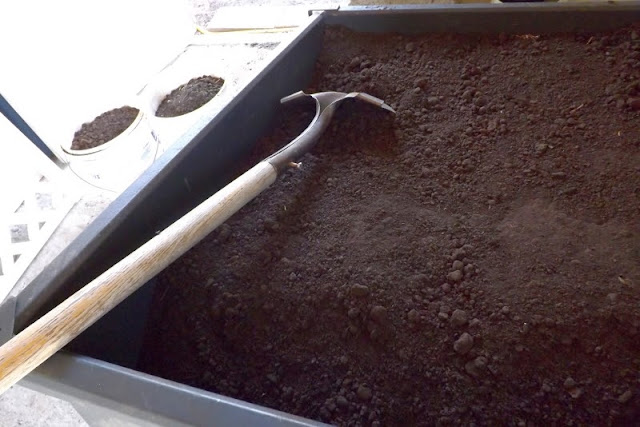 I've moved nearly half of the manure from the garage, putting much of it in the garden and filling the big dump cart to store in the shed.  I have to carry it out to the garden beds in 5-gallon buckets, as I cannot maneuver through the garden with the wheelbarrow now, the plants are overtaking the paths!  Man, those buckets of cow poop are heavy.  I had to stop for the day after I dropped one of them and it grazed the top of my bare foot.  The pain!  The pain!  Oh well, it was too hot to continue anyway. 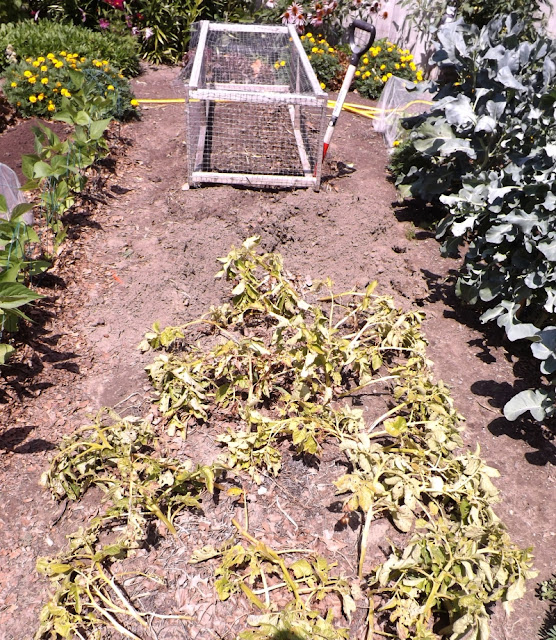 This is the bed I'll work on next.  As I dig out these potatoes, I'll fill the trenches with kitchen waste, chopped leaves and cow manure.  I think I'll move some of my Tristar strawberries here, as I want to do away with the raised bed they are in now.  It's 4' wide, and I find I just can't hardly harvest the berries in the middle.  A 3' wide bed would be more manageable.  I think I'll use the lettuce cage over the fall planting of cabbage, and cover it with netting.  I'm tired of sharing them with the bugs!  I moved the cage from behind the shed, and have no other place to store it, so I might as well use it for something. 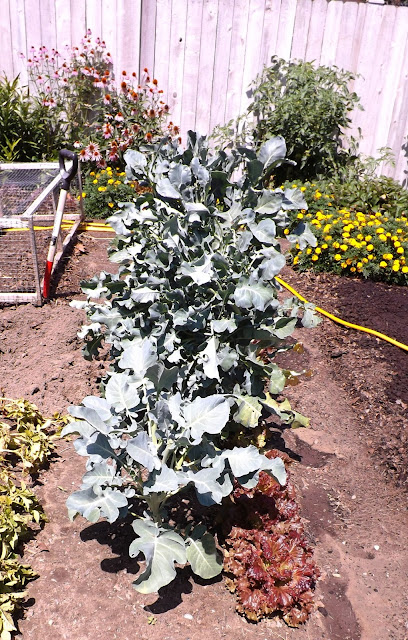 The broccoli plant in the center was so large it fell over last week, and it was resting in the bed next to it.  I had to pound in a stake and use a bungee cord to hold it up and out of the way!

It's 99F in the shade right now.  I think I'll pour myself a big iced tea and relax until it cools off, then I want to begin moving those strawberry plantlets.  I need a miner's hat with a headlight, then I could work in the garden after dark!