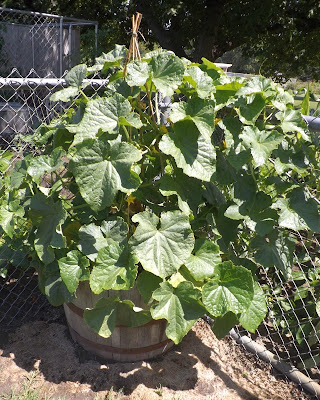 Spacemaster cucumbers growing very nicely in a half barrel.

The Waltham Butternut squash are overtaking the fence.  I've begun fastening the vines to the chain link with loose cable ties, but I still managed to hit one with the lawnmower and break it off today. 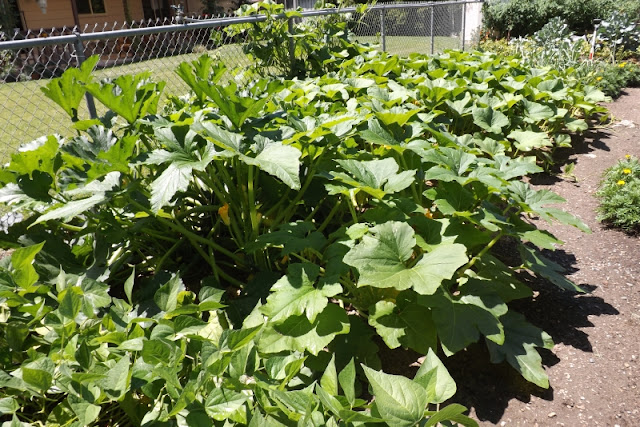 Provider bush beans and a sea of squash.  Jackpot Zucchini and Early Summer Crookneck in the foreground, the Waltham Butternuts  behind them. 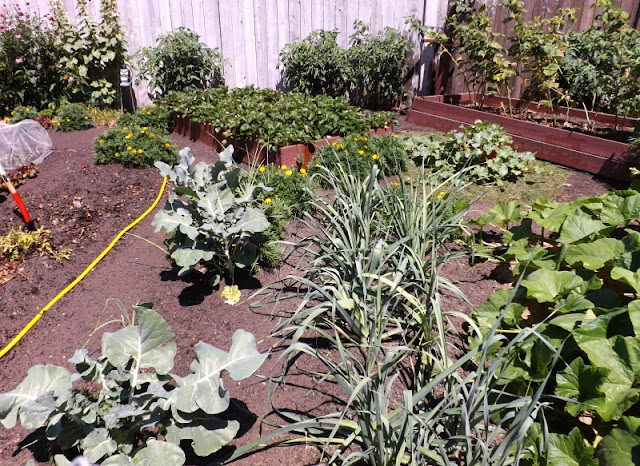 Broccoli (mixed varieties), Large American Flag leeks, Lemon Drop marigolds, Tristar strawberries, Hearts of Gold cantaloupe, Celebrity tomatoes, Canby raspberries.  There are some spring planted garlic scattered here and there.  There are spaces opening up for fall planting, but I don't know what to plant, if anything.  There's so much food out there already, much more than two old people need!  Maybe I'll just concentrate on amending the soil to get it ready for Spring 2014.  I just pulled out a 6-foot long root that I hit while digging potatoes.  Well, I cut it off at 6', I couldn't pull it any farther without messing up my beans and beets.  I've run into quite a few of those big old roots, the remains of the maple tree that used to grow in this spot. 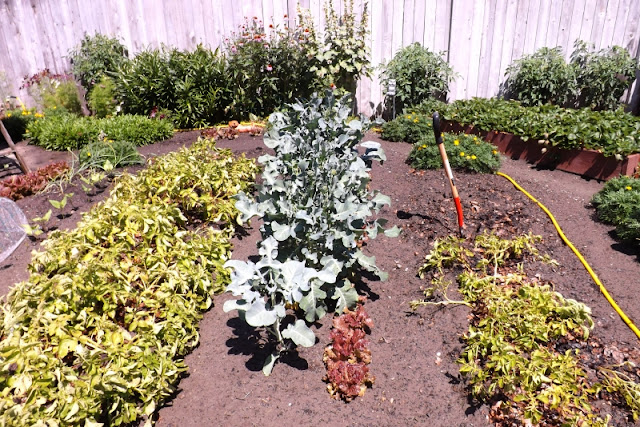 Dark Red Norland potatoes, broccoli (mixed varieties), Red Sails lettuce, mislabeled potatoes that are probably Russet (supposed to be Yukon Gold).  I hate the looks of the potato beds as the plants begin to die back!  I'll be happy when they are all dug. 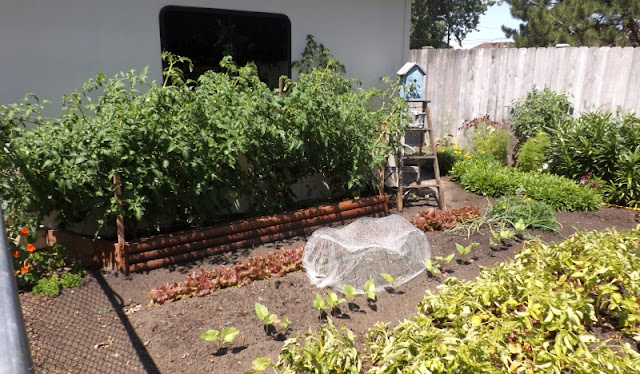 Super Fantastic tomatoes. I picked my first full sized tomato from here this week, and we'll be eating the first BLT of 2013 for lunch on July 9.  The Red Sails lettuce is holding up well through the heat, a new planting of Chioggia beets is under netting to protect them from leaf miners, and a single row of Provider bush beans, the last of the seeds in the packet, looking like they could use a shot of fish fertilizer. 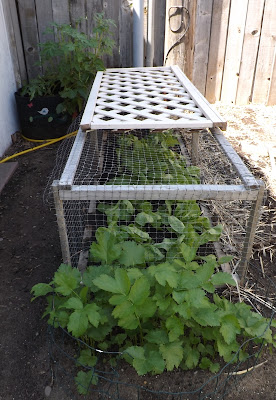 A bed of Anuenue lettuce that I'm shading to try to get it through the hot weather.  In the foreground is a small planting of parsnips, a mix of Hollow Crown and Andover.  I planted three rows of carrots behind the lettuce bed, but so far none have germinated.  The triple digit heat of last week may have doomed them. 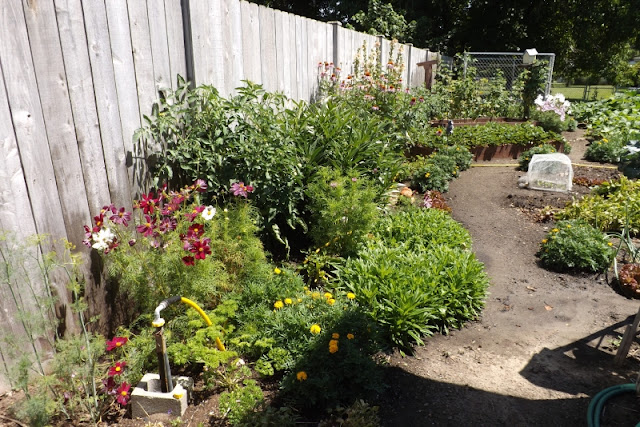 The cosmos and marigolds are just about the only color left in the garden.   The hollyhocks weren't as pretty this year as they usually are. 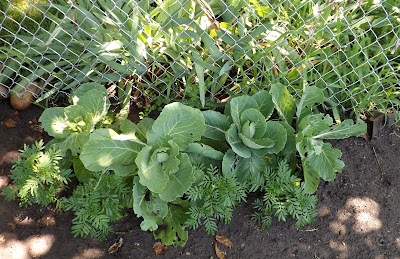 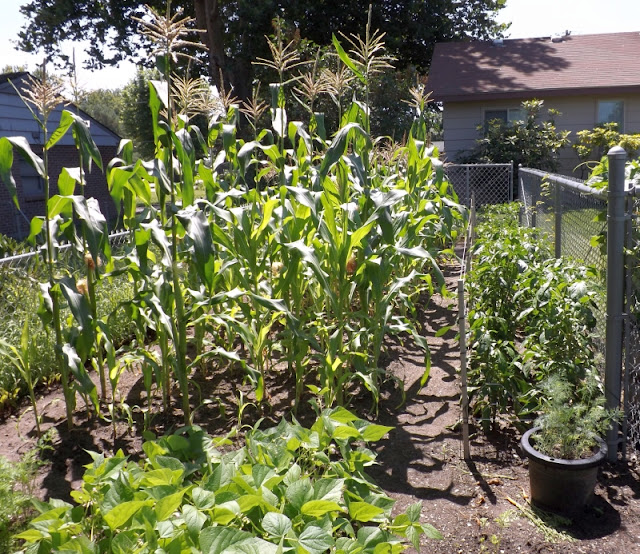 The corn (Honey Select and Early Sunglow) has tasseled and ears are developing, so it won't be long now!  On the right, the sweet peppers have nearly reached the top of their little 36" high fence, and are loaded with peppers.  Some are already turning color.  Contender bush beans in the foreground, not yet bearing. 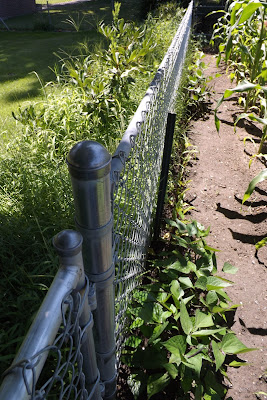 My single row of beans, parsnips and beets continues to struggle to keep ahead of the neighbor's weeds.  I try to reach through and pull the tops off to keep them from going to seed, but I think it's futile to even try. 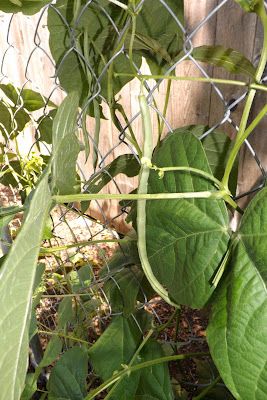 The first Fortex pole bean!  I love these beans, so I hope there will be many more. 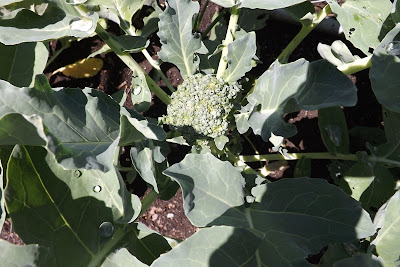 The second planting of broccoli is beginning to head. 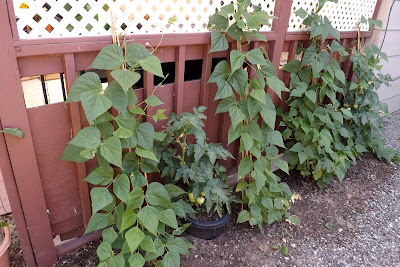 Fortex pole beans and Patio tomatoes.  Two other Patio tomatoes suffered in the recent heat, so were moved to a shadier spot.  One looks like it might be OK, but the other is iffy. 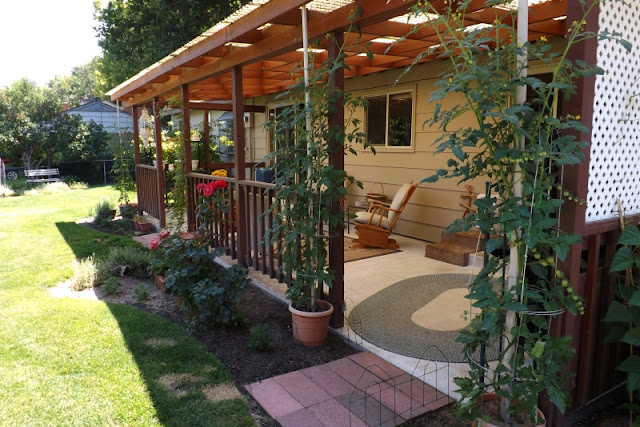 The Sungold cherry tomatoes have grown up to the roof of the patio. 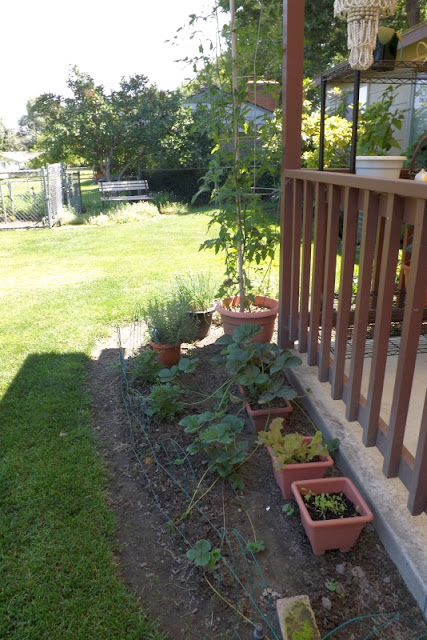 The pot garden is being overtaken by Fort Laramie strawberries.  I still haven't had any berries from these plants, but one is finally blooming and setting fruit. I've had a few Black Cherry and Una Hartsock tomatoes from the plants on this side of the patio, and they were delicious.  By far the best tasting of any of the early tomatoes so far, even better than the Sungolds.  Lettuce seedlings grow here, waiting for a spot in the garden.

That's Granny's summer garden.  There's more in there than I've shown today....carrots, a new double row planting of Fortex pole beans where I pulled the pea plants, more beets, cabbages and broccoli plants, another parsnip bed, more sweet peppers, basil, parsley, dill.  The garden has gone from pretty to productive.  I guess that's a good thing, but I miss the pretty.