I'm getting too old for all this moving back and forth! For those of you who don't know me, Mr. H and I have homes in Pasco, WA during the summer months and in Bouse, AZ during the winter months. We have been spending winters in Arizona for the past 15 years, which means I must pack up everything and drive 1200 miles, leaving one house or the other empty for six months of the year. I was really quite organized with my packing to leave Arizona, but right now about 90% of everything is still sitting in my garage, waiting to be brought in the house and put away. Because....

The plants....(tomato and peppers) had to be rescued from their picnic cooler and brought into the house. Unfortunately the cooler didn't insulate them against the cold as well as I thought it would. One of the four Tumbling Tom tomatoes succumbed, and two others were frostbitten but will survive. The largest of the four made it just fine. Four of the peppers survived, which is fine since I really only wanted four of this variety anyway. The rest of them were frozen. So the survivors are warm and comfy, under the light in the plant window.

Plant lights....my plans on installing two 4' shop lights on the shelves of the plant window have been abandoned. Why? Because my 48" wide window has an actual 46" usable width, so the four-footers won't fit. I'll either have to find shorter fixtures and use multiples, or I'll have to rig up a system in the garage.

The pups....Otto had a big bubble-like growth on his ear. I assumed it was a hematoma, and I put off taking him to the vet until we returned to WA. Our nearest vet in AZ was 70 miles away, and I figured there would be follow up exams after his surgery, so I opted to wait a couple of weeks and have it done here. His surgery was successful, the incision was right along the edge of the ear where the fur starts so I doubt the scar will even show. Himself got four stitches and looked like a cone head for a few hours. 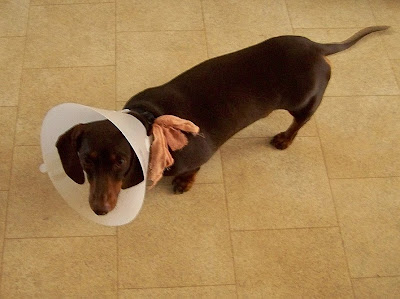 Little Annie also has to go to see the vet today. She's only 14 months old, a very light eater who eats mainly roasted chicken breast or thighs and green beans, and very little of that, yet she weighs twice what she should. Lately she has managed to hurt herself several times by jumping out of a chair or out of the car and landing on her plump little rump. Then she limps for a while, and it breaks my heart to know she's hurting. Today she'll have blood work done to see if she has a thyroid problem.

Mr. H....is becoming a real pain in the butt. We decided to drop DISH TV after having subscribed to it for the past 12 years, and to go with a Charter bundle for cable TV, phone and high speed internet. I bought new V-Tech phones and Mr. H can't quite figure out the green button is to answer and the red button is to hang up. He is really electronically challenged (grandkids have to turn the computer on and off for him) and it did take him about a year to master the cell phone, but really...

And he doesn't like the cable, because it doesn't have old western movies on it. so I have to add to our programming and get him Starz. And he can't see a bit of difference in the regular versus high definition programming, so I might as well drop the HD and save $5 a month...that can pay for his Starz. I have to admit, the non-HD is just fine with me.

Mr. H is getting very crotchety in his old age.

I've saved the best for last. I think I had a "senior moment". Only it was more like a "senior entire day". I went to Wal-Mart yesterday morning to get all the stuff I need to get my seedlings started for the garden. I bought a big bag of Miracle Grow potting soil, some perlite (couldn't find the vermiculite that I wanted), and a couple of those Jiffy trays with the fiber pots just to get the trays so I can start making soil blocks. I got everything home and decided to go ahead and use the pots for all my tomatoes, and put them into the clear plastic produce containers that I use for mini-greenhouses. I ended up filling 45 pots with three of each of fifteen varieties of tomatoes....what on earth am I going to do with 45 (make that 48 with the three I already have growing) tomato plants? Well, I had the Charter cable guys here all day doing installations, I had daughter and her baby visiting, I had son and his dog visiting, I had Mr. H complaining about anything and everything. I went to get my purse so I could drive my son home and...MY PURSE WAS MISSING! We turned the entire house, car and garage upside down. No purse. I called Wal-Mart. No purse. We drove to Wal-Mart and checked out the carts (like a purse would still be there after 6 hours had passed). No purse. I called the police and filed a report, then began calling to cancel all the credit and debit cards. I had canceled my Chevron card and my Bank of America credit card, and was in the process of canceling my BOA debit card when the customer service rep asked for my Social Security number. Well, I've never memorized it, and it was in the lost purse, but I knew I had a spare in my drawer in the bedroom. So I went in the bedroom and opened my underwear drawer...and guess what was in there. My "lost" purse. I NEVER put it in a drawer, I always set it on the dresser. I have no idea why I put it in the drawer. My brain must be tired.

Maybe tomorrow will be better.