The temperature was really close to 70F today, the sun was shining, and it was a beautiful day to get more garden chores finished.

First I went to town and bought my seed potatoes. I had planned on just twelve plants in the small 3x4 bed, but decided I could crowd in another three. In past years, I've always cut my seed potatoes into 2 or 3 chunks and let them cure for a few days before planting them. However, being a bit late this year getting them in the ground, I opted to buy the smallest potatoes I could find and just plant them whole. They were only 79-cents a pound, so two dollars gave me 9 Red Norland and 6 Yukon Gold. I think....I forgot just what types I bought! I know I got a red and a white/yellow.

I had prepped the bed earlier, removing a few mesclun plants that had overwintered and loosening the soil with a hand cultivator. I placed the seed potatoes on top of the bed to check their spacing, then planted each one by digging into the lovely, rich, soft soil with my hands. I didn't even need a trowel, and it felt good to finally get my hands into dirt. 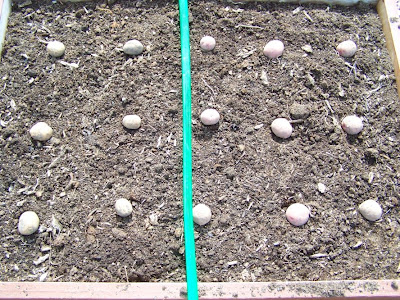 The seed potatoes were covered with about 2" of soil. The sides of this bed will get built up another 6", so there will be plenty of room to hill up the potatoes another 4-6 inches as they grow. 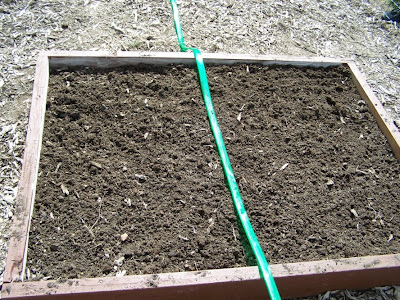 I had my grandson, Keven, help remove the remaining carrots and spinach from the middle bed. The spinach was taken inside to be used in our dinner salads, along with a small volunteer garlic. The carrots, which were quite small, will be a real treat for our house rabbit, Cookie.

We added two bags of composted manure to raise the level of the soil, and took turns digging it in. It was an easy job, as the soil here was also so loose and friable that it took no effort at all to turn the manure under. All of the 4x4 beds are now ready for planting, and I took a few minutes to plant a row of radishes next to the four squares of beets I had planted yesterday. 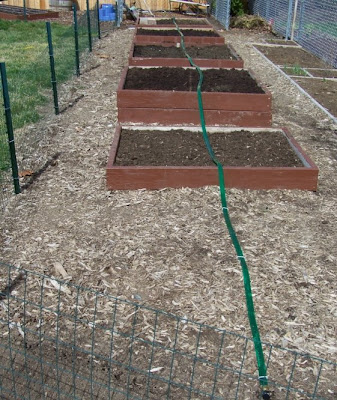 It was time to move on to the north garden. First I removed the two old blueberry bushes from the half-barrels. I had just moved them there last fall, but I decided they were long past their prime bearing years and it was time to bite the bullet and purchase new ones. So two little bushes got planted and watered in well. I added this morning's coffee grounds to the water, and they (and the strawberries) will now get our coffee grounds each day.

That pretty much finished up the garden preparation for now. I still have to weed the squash circle and the 4x8 tomato bed, but that will take mere minutes. Wire will be strung on the raspberry trellis as soon as it is needed. 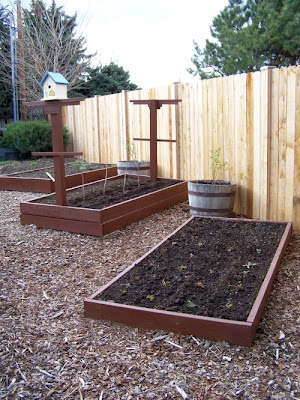 The area next to the 4x4s has to be given a couple of inches of compost, and that bed will probably require some digging as it is native soil with just one year of amendments added to it. The garlic in that bed is thriving, the shallots look so-so, and the chives are just pushing through the soil. I may have lost my rosemary to the harsh winter, but I'll give it a couple of weeks to show some green before I pull it out.

My big black compost barrel will become a big black planter (or two) this year. I disassembled it, and nothing had turned to compost, it was just full of stuff that will have to be run over with the lawnmower and recomposted this year. I probably have 20 bags of leaves behind my shed, just waiting to be shredded. Than I'll try my darndest to find a source for horse manure, and build myself a real compost pile.

Just look at what came in the mail today! Dan, of Dan's Urban Veggie Garden Blog, sent all of these to me! 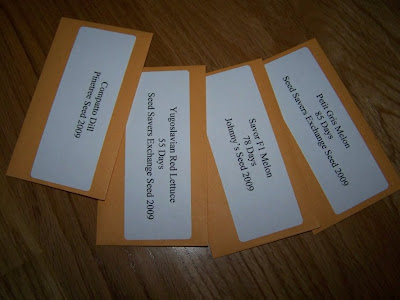 Now I will have "Daphne's Dill" in the main garden, and "Dan's Dill" on the patio. The Compatto Dill is supposed to be a compact plant that will do well in containers. Yugoslavian Red Lettuce is described as being "Extremely decorative, this beautiful butterhead produces burgundy tinged leaves on loose heads. Sweet and tender; a wonderful addition to the salad bowl." And I'm really looking forward to the melons, which will make much better use of the big black compost barrel than the compost did! I may even paint the barrel blue (like the blue clematis/pansy planter), and it should look really nice with melon vines tumbling over the sides. Thank you, Dan!

Come back to visit my blog tomorrow. I'll have "Seedling Saturday", with photos of what's growing in the mini-greenhouse and on the windowsill.