It's beginning to look like spring at Granny's house! 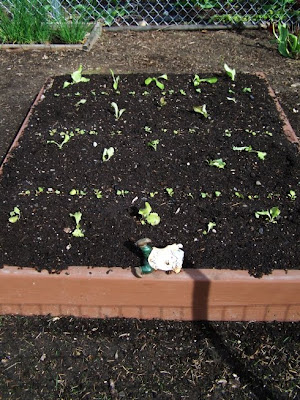 It was a bit chilly and overcast this morning, but I had left my larger lettuce seedlings out for two nights in a row and decided it was time to get them into the garden. Five plants each of Red Sails, Summercrisp and Red Romaine, three plants of Parris Island Romaine and two plants of Buttercrunch were planted between the already growing rows of radishes. I had planned for five of each variety, but the Parris Island Romaine didn't germinate too well for me (two year old seed), so I didn't have enough to complete the row. I just hate it when that happens, I like my lettuces to look like pretty little ladies, all in a row. 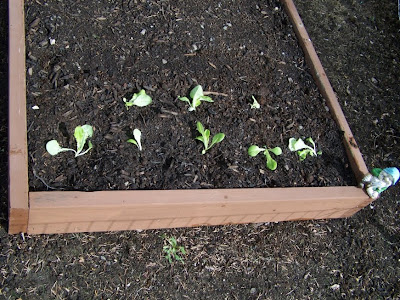 I had a few more that germinated unevenly, so they went into the next bed....three each of Manoa and Little Gem, and the last two Buttercrunch. They all got a good drink of fish fertilizer, as did Annie. That silly dog found my measuring cup and was happily cleaning that nasty stuff out of it with her tongue! No kisses for you today, Annie! Good heavens, I hope it doesn't make her grow. That dog is fat as a little pig as it is.

By the time I got all the lettuce planted, the sun was peeking out from behind the clouds, so I set all the seedlings out for a while and gave them a drink of very dilute fish fertilizer, about one Tbsp. in two gallons of water. Since just about everything was already stinking up the back yard, I decided to give the other plants a good shot of the fertilizer, too. Five of the eight direct seeded broccoli were growing well, the others looked as though the sprinklers hadn't touched them. I gave them a good soaking of the emulsion, and did some sprinkler adjustment so they would get water in the future. The spinach, cilantro, radishes and onions all got the fish emulsion.

I noticed the first of the potatoes were beginning to break the surface of the soil, and the sugar snap peas are finally popping up all over, a full ten days later than the shelling peas.

I decided to move the big blue pot to an area next to the patio. The clematis had winter killed, and the chives were outgrowing their area, so I pulled out the dead vine and moved the chives, which are just ready to flower, into the larger top part of the pot. More fish fertilizer. It's really reeking out there now, as am I. I don't think that smell will ever wash out of my hands.

I did a bit more weaving of canes in the raspberry bed, and pulled out all the suckers that were growing within about 8" of the sides. I dug the stray strawberries from the garden path and planted them in the bed where they belong.

I removed three more sections of fencing. I'm eliminating the short wire fencing in the back, but keeping it along the east side, as that's where the dogs are a bit troublesome. They don't bother the larger (mostly perennial or containers) stuff on the north side, and removing the fencing certainly makes it easier to get in there with the garden cart. It also makes it easier for Mr. H to mow. It also makes it easier for me to maybe take a bit more of the lawn to use for garden. Maybe Mr. H won't notice. I'm leaving the fence posts in, and will use them for supports for a row of tomato buckets. It's the absolute only place I have left for the determinates, and those sturdy posts will certainly keep them from toppling in a windstorm like they did last year.

Once I got all my gardening mess cleaned up, I did some strategic replacement of sprinklers, and attached them, with hoses, to the automatic sprinkling system. Hopefully, I'll get them replaced with PVC, bubblers and drips before summer, but for now the sprinklers will have to do.

Now I have to move all the seedlings back inside the garden shed. Then fix dinner. Then maybe a hot bath and early to bed. I'm ready ;-)